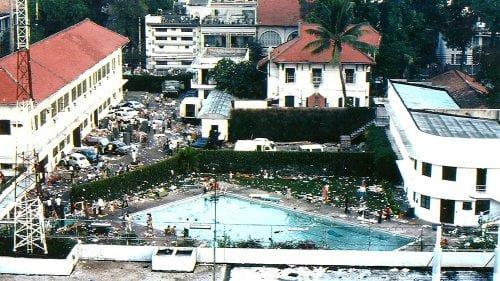 It has been almost 40 years since Saigon fell to the overwhelming forces of the North Vietnamese Army. We are all familiar with the images of the final days but there is much more to those “Last Days in Vietnam.”

After Richard Nixon's resignation, the emboldened North Vietnamese began flouting the Paris Peace Accords, steamrolling south until the fall of Saigon became inevitable. U.S. Ambassador Graham Martin, refusing to accept defeat and not wishing to panic South Vietnamese, stalled evacuation plans for the remaining American forces, diplomatic corps and civilians and Congress rejected President Ford's aid plan for the South Vietnamese, many of whom would be facing certain death. U.S. Army Captain Stuart Herrington tells us it was a terrible moral dilemma for everyone and he and several colleagues began their own underground evacuation of a desperate people, but ultimately the United States left most behind during the "Last Days of Vietnam." Writer/director Rory Kennedy (HBO's 'Ethel') delves into a very specific historical footnote of the Vietnam War, balancing a big picture recounting with shadings of personal human drama that flesh out the myriad complexities, moments of heroism and shame, in an untenable situation. Although Kennedy follows the standard documentary format of archival footage and stills edited with current day interviews, she has constructed her telling of the story so expertly that her work is both moving and riveting. Ambassador Martin, whose loss of his only son in combat gave him additional emotional ties to the country where he served, comes across as a man of nobility and morality who nonetheless frustrates with his hesitance to act. This one man is deserving of his own documentary. But there are so many other stories to be told here. Martin was given four evacuation plans, but the surprise attack on the Saigon airport winnowed them down to the least promising - evacuation by helicopter for those within the U.S. Embassy, which, already housing thousands of South Vietnamese, was being overrun by thousands more. With 24 hours to accomplish the job, one Marine pilot flew for over 18 hours straight. Out in the oceans, the men of the U.S.S. Kirk, outfitted with one helipad, was astonished by the approach of helicopters loaded with refugees. As each landed, it had to be pushed over the edge of the ship and into the sea in order to enable the next to land. Miki Nguyen tells us how his mother dropped her baby out of a helicopter into the waiting arms of the men on deck before jumping herself. They had flown out in a Chinook, much too large to land, and after his human cargo had all gotten to safety, the pilot miraculously managed to hover for 10 minutes while he struggled out of his flight suit, ditching his bird to one side as he escaped from the other. Department of Defense official and former Navy Officer Richard Armitage flew into the country to ensure American provided South Vietnamese war ships would not fall into the North's hands while surreptitiously loading them with 30,000 refugees who arrived in the Philippines without immigration papers or passports. It' most ironic to watch Henry Kissinger relate President Ford's anger when his humanitarian efforts were denied by Congress. Due to a communications mix up, the Ambassador was ordered to leave while almost 500 remained, assured help would still arrive. It never did. After seeing this film, one may never hear Bing Crosby's 'White Christmas' in quite the same way ever again. "Last Days in Vietnam" is yet one more reminder of the devastation often left behind in the wake of American intervention. It is sobering, yet also a celebration of the individual willing to put himself on the line for what is right. Kennedy's documentary is one of the best of the year. Grade:

Filmmaker Gus Van Sant has always followed his own course ever since 1985 feature debut, “Mala Noche.” His most recent films, “Gerry” and “Elephant,” were both hypnotic and, to many, baffling with long, lyrical camera shots of people walking and nothing much happening for most of the films. These are experimental works and the director completes his trilogy with a fictional look at someone who strongly resembles Kurt Cobain in “Last Days.” Last Days” begins with Blake (Michael Pitt) wandering through the Northwest wilderness wearing an institutional robe and pajamas. Face unseen and muttering inaudibly, we watch the young man as he immerses himself into an icy stream then make his way to an old manse gone to serious seed. Once there, he stuffs his gullet with Cocoa puffs and pads around the place in oversized boots, heavy coat and a woman’s full slip, murmuring all the while. Friends and colleagues wander in and out of the big house but none, save one girl, knows that Blake is there. One of the visitors, Donovan (Ryan Orion), who may be Blake’s manager, even hires a private detective (Ricky Jay) to try to find the man who is right under his nose. This gives Blake a spectral quality that indicates that he is no longer of this world and is in the nebulous zone between life and the hereafter. Last Days” is a meditation of a life destroyed by fame, drugs and overwhelming responsibility as we watch the last hours in the life of a famous but deeply troubled musician. As with his previous two films, Van Sant is in minimalist experimental mode with little intelligibly said by the main character as he wanders around his isolated and seedy home. Nothing earth shattering happens during the course of “Last Days” where a major event is a visit by the local Yellow pages salesman (Thaddeus A. Thomas) or by a pair of Seventh Day Adventists brothers (Adam and Andy Fiber). The filmmaker says that life, even among the famous, can end on ignominious and lonely terms. This is a tough role well handled by Michael Pitt whose resemblance, dress and mannerisms are closely aligned with the real life Kurt Cobain. One of the high points in Pitt’s performance comes when he, alone and playing all of his instruments at hand, builds a tune that is mesmerizing in its construction. Other scenes, when nothing really happens, are done with a hypnotic quality and the whole film is like a quietly staged train wreck – nothing much happens until the final, inevitable disaster. Van Sant’s fictional interpretation of Cobain’s end is aided by Tim Grimes’s interesting art direction, a combination of opulence and squalor. The fluid camera work, by Harris Savides, glides through the huge, rundown house with its falling plaster and grungy rooms to very expensive oil paintings hung amidst the mess. Blake’s bizarre combinations of clothing, by Michelle Matland and Allan McCosky, are imaginative and unique. Last Days” is not going to have explosive box office and will likely appeal to a very narrow niche or two - for those interested in a fictional interpretation of the demise of Cobain or fans of Gus Van Sant’s latest experiments in filmmaking. The slow pace, lack of real dialogue or “story,” constantly moving camera and no real explanation will keep most people at arm’s length, much like Gerry” and “Elephant.” I, personally, am intrigued by the helmer’s guts to experiment when he could make a tidy living doing mainstream film. This one is for film buffs and the curious.