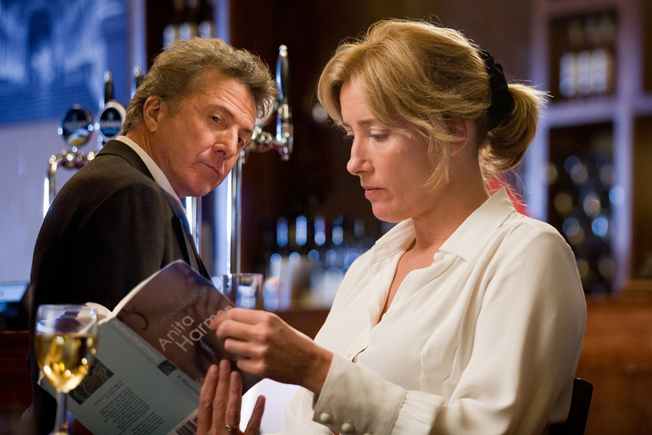 Harvey Shine (Dustin Hoffman) is a divorced composer of commercial jingles on his way to London to attend his daughter’s wedding. Once there, he gets a double whammy ­ he no longer has a job AND his daughter wants her stepfather (Josh Brolin) to give her away. Kate Walker (Emma Thompson) is an airport passenger survey-taker, unmarried and with no prospects. These two lonely people cross paths not once, but twice, and it is this second crossing that may be the charm for “Last Chance Harvey.”

Sophomore writer/director Joel Hopkins (his debut feature, “Jump Tomorrow,” is an unknown to me) has come up with a tale of two solitary people that has every cliché going (including the hated “modeling clothes” montage). You have been here many times before ­ the schmarmy, overtly sentimental “Stanley & Iris” comes to mind. The only things that keeps “Last Chance Harvey” from drowning in its own treacle are the likable performances by its stars, Hoffman and Thompson. Each is more than capable of breathing life into their stick figure characters and are the only reason to see it, if you must. You know exactly what the outcome will be only minutes into the film but the thesps’ chemistry almost makes that outcome worth the wait. Almost. Scripter Hopkins does nothing original with the well-worn story that is a checklist of its clichés. Helmer Hopkins shows no flair for direction as he woodenly trots his actors through their paces. Even veterans like James Brolin, Kathy Baker, Eileen Atkins and Richard Schiff cannot breathe life into their underdeveloped characters. At least one can appreciate the talent of the stars of “Last Chance Harvey.” Not so for the rest of the film. Because of this talented pair,