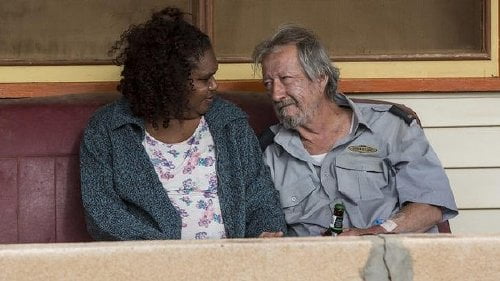 Rex (Michael Caton) drives a taxi in Broken Hill, NSW, Australia. He has his fellow cabbie cronies and occasional girlfriend, Polly (Ningali Lawford), but is, at heart, a loner. Then, two things happen. He is diagnosed with terminal cancer and, in Darwin 3000 kilometers away, euthanasia is legalized. This begins a lonely trek across the country for Rex so he can die with dignity in “Last Cab to Darwin.”

In the remote Australian town of Broken Hill, Rex (Michael Caton, "The Castle") is its well known cabbie. The senior loner lives with his dog and his vinyl LPs and has a long standing but secret affair with his indigenous neighbor Polly (Ningali Lawford-Wolf, "Rabbit-Proof Fence," "Bran Nue Dae"). When he learns his cancer has spread and his time left is limited, Rex doesn't want to rely on anyone. He hears a radio show featuring Dr. Farmer (Jacki Weaver, "Silver Linings Playbook") discussing the machine she's devised for euthanasia, recently made legal on the other side of the continent, and packs his bags and drives 3,000 kilometers in the "Last Cab to Darwin." This certainly isn't the most original film to come along (Ramin Bahrani's "Goodbye Solo" immediately springs to mind), but it's so beautifully cast and directed (by Jeremy Sims) it's a joy to go along for the ride. The film isn't at all about euthanasia, instead a dying man's romantic odyssey of self-awareness. First Run Features, more known for their documentaries than their fiction features, is distributing the type of movie that used to be snapped up by Miramax. When Rex calls in to that radio show offering to be Farmer's legal guinea pig, his pub buddies learn of his diagnosis but cannot change his mind. 'I left some stuff for you inside,' Rex tells Polly before hightailing it down their road in the early morning hours. Polly crosses the road to find Rex's dog and his will, leaving her his house. When his windshield is smashed by a flying rock, Rex stops in Pussy Willow, so named for its macabre landmark, a tree full of hung feral cats. An indigenous scoundrel offers to fix it at the local cafe. Tilly (Mark Coles Smith) will end up traveling all the way to Darwin after Rex saves him from a violent robbery, thieves attempting to take the money Tilly stole from Rex. Rex calls Polly and catches hell, Polly saying she doesn't want his dog or his house. Rex picks up another passenger when British bartender Julie (Emma Hamilton, PBS's 'Mr. Selfridge'), attracted to Tilly's joie de vivre, decides to move on. She also happens to be a nurse concerned for Rex's welfare. When the trio arrive in Darwin, Rex finally learns what Farmer had been trying to tell him - that there are several legal hoops she must jump through in order to use her machine. Screenwriter Reg Cribb ("Bran Nue Dae"), adapting his play for the screen, goes through familiar beats, but Sims creates such a sense of eccentric place peopled by such engaging actors it feels fresh. Caton may be the central character, and his Rex is someone to route for, but it is Lawford-Wolf who is "Last Cab to Darwin's" driving force, a no nonsense woman whose heart is breaking just as it is being filled by the extended family she now has room to house. We can feel the strong bond between the two whether they're exchanging their routine barbs or sitting in silence holding hands. The charismatic Smith lightens the mood with his comic charisma while his character faults provide Rex with insight. David Field ("The Rover"), John Howard ("Mad Max: Fury Road") and Alan Dukes portray not only Rex's drinking buddies, but Broken Hill itself. The most well known of the cast, Jacki Weaver, gives the film's weakest performance, Dr. Farmer's motivations seemingly contradictory (caring for her patients, opportunistic with Rex). Ed Kuepper's guitar score buoys the film while anchoring its location. Grade:

In true road trip fashion, Rex meets colorful characters along the way, including Tilly (Mark Coles Smith), a native Australian who helps Rex out and cajoles him to take him along, and Julie (Emma Hamilton), a nurse turned barmaid who helps care for the dying man when things get bad for him. The journey must end, of course, and the point of the story takes shape when he meets Dr. Farmer (Jacki Weaver), the inventory of the euthanasia machine. Things get complex as the new law is still in a state of flux and Rex cannot simply just “end it.” The story, by Reg Cribb (based on his play), does not make many diversions in Rex’s quest, giving the film a distinct beginning, middle and end with any and all loose ends neatly tied. At first, it seems that “Last Cab to Darwin” is heading toward a statement about legal suicide, but it is more about learning that to live life, you have to share it. Michael Caton, as Rex, though gruff and surly, has a good heart and you do not want him to die alone. Caton builds both a sympathetic and empathetic character in Rex. (I am embarrassed to say that I did not recognize the actor who starred in my favorite Aussie comedy, “The Castle (1997),” another journey film but of a different king. The supporting cast actually does bolster the main character as he experiences both a physical and spiritual journey. The spiritual one, though, is the real heart of “Last Cab” as Rex learns the meaning of life, real life, is to not spend it alone but with your loved ones.