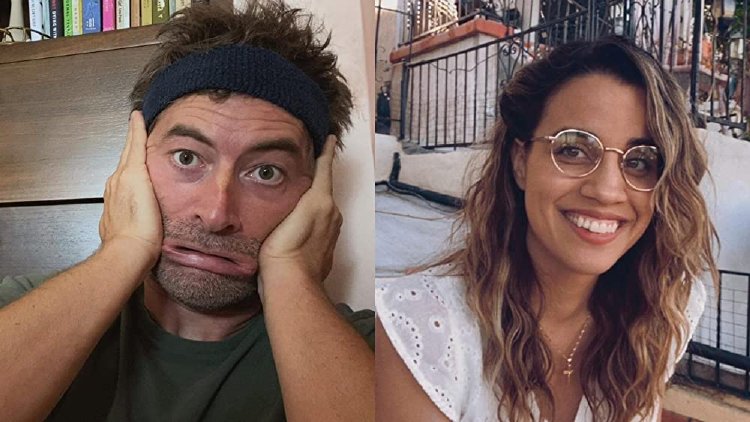 When Adam (Mark Duplass, "Creep," "Tully") strolls into his living room one morning, he’s shocked to be greeted by a woman on his computer.  Cariño (Natalie Morales, "The Little Things") informs him she’s ready to begin teaching him Spanish and endures the boyish horseplay that ensues as Adam learns his husband Will (Desean Terry, Apple TV's 'The Morning Show') is surprising him for his birthday with 100 “Language Lessons.”

Cowriter (with Mark Duplass)/director Natalie Morales ("Plan B") may have made the first pandemic movie that isn’t about the pandemic.  Conceived and shot within 4 weeks over Zoom, while Morales had a DP, she did everything else herself, from lighting to set design to her own special effects makeup.  She and Duplass have created two compelling characters from different parts of the world that forge a unique connection with their playful senses of humor and deep wells of empathy.  These two are so enjoyable to watch even those thoroughly sick of Zoom calls, which I believe encompasses just about everyone, will forget about the format, Morales propelling the narrative by switching up backgrounds in creative ways.

Chaptered with dual meaning lesson headings, we plunge into ‘Immersion.’  Cariño, who has set herself up like a classroom teacher with everything but an apple on her desk, waits patiently for her clients’ hijinx to subside, then faces an Adam reluctant to switch up his morning routine.  Thinking on her feet, she offers to make the lessons part of that and is soon speaking (in Spanish) with Adam as he swims.  Uncommented upon is how incredibly low the tutor’s rate is ($10 a lesson!), but Adam, clearly uncomfortable with the appearance of his sprawling Oakland home, quickly explains the wealth belongs to Will.

Lesson 2, ‘Comprehension,’ is an entirely different thing, one in which Adam is late to, then strangely reticent.  We will learn he is in shock, a terrible tragedy signaling the lessons may be over before they’ve really begun.  But Cariño’s already bonded with this man and her caring video messages and gentle nudges become a lifeline.

These two strangers’ stories and relationship take many surprising twists and turns.  Things become unsettling via partial information and changing backdrops, at one point Adam leaning against a wall amidst a series of spiky plants, at another his face a leering moon in darkness only illuminated by the glow from an aquarium.  Things seem even direr when Cariño pops up with audio only, her black screen excused as weak Wifi.  It takes a lot of talent to make our imaginations work as hard as they do here, jumping to conclusions to fill in the blanks.

All pretense and politeness drops for a climactic heart to heart.  It is rare that we see so much complexity in a male/female relationship not leading to romance.  But platonic as it may be, “Language Lessons” has heart to spare.  This is a film to embrace.

Carino (Natalie Morales) gives private Spanish lessons to her remote students from her home in Costa Rica. Will (Desean Terry), way up in Oakland, buys a 100-class package for his unsuspecting husband, Adam (Mark Duplass), who is skeptical, at first. But, as the days and sessions pass, a genuine friendship is formed between teacher and student, all because of the “Language Lessons.”

Actor-turned-feature-film-director Natalie Morales not only stars in her debut helming effort, she also co-wrote the screenplay with her co-star Duplass and acted as executive producer on the project, too. And, I am very please to say that she pulls off the whole package in a charming, funny and sometimes sad examination of two people who meet, long distance, and how they become a real, caring friends.

During the early days of the now-becoming-normal pandemic, I wondered how the world filmmaking community would handle it. We have seen a few films, COVID-specific or just from being stir-crazy, from those in the creative movie biz, like “Bo Burnham: Inside,” “Together” and the compendium “The Year of the Everlasting Storm.”

Things begin simply enough with Adam learning, quite suddenly, that Will committed him to two years worth of one-on-one Spanish lessons with Corino. Adam was raised, as a boy, in a Spanish-speaking home but has been away from the language for many years. Will wants his partner to return to his roots and Adam, reluctantly, goes along with the plan.

What follows are several chapters, or lessons, titled “Emersion,” “Comprehension,” “Context,” “Extra Credit” and “Fluency.” These titles obviously refer to learning a language but they also have more subtle mean when applied to the friendship that grow into a platonic love. As we watch the two stars – and this is a true two-hander for the actors – the nouns also become a part of the definition of that love.

The optimist in me made me think and hope things would end a certain way – and they sort of do – but the getting there with these two nice people brings on a wash of emotions that are genuine and palpable and you root for our heroes to be happy.