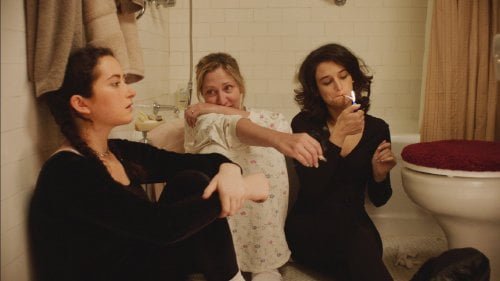 Dana's (Jenny Slate) willingness to have sex in the woods with her fiance Ben (Jay Duplass, "Beatriz at Dinner") proves half-hearted at best as she focuses on everything but the erotic. The accommodating Ben has her feeling too comfortable, and so when she attends a party with him and old college friends, attentions from former lover Nate ('American Horror Story's' Finn Wittrock) turn her head. Meanwhile rebellious younger sister Ali (breakout Abby Quinn) falls upon evidence that their father Alan (John Turturro) is having an affair. Dana uses this as a cover for temporarily moving back home and the Jacobs family splinters before they find their way back to each other in "Landline."

Cowriter (with Elisabeth Holm)/director Gillian Robespierre reteams with her "Obvious Child" star for a NYC family dramedy set back when "The Brothers McMullen" won Sundance's grand prize. You won't hear that film mentioned, but you will be exposed to Benihana's, floppy discs, CD listening stations, eyebrow rings, payphones, the Clintons and a secretary who looks just like "Showgirls" era Elizabeth Berkley. The film has a central problem in that Jenny Slate's Dana never evokes sympathy, her character using people and situations to her own ends, but the rest of the ensemble cast are aces, relative newcomer Abby Quinn stealing the show. Ben's such a sweetie, he offers to take the middle seat for the Jacobs' drive home from a lake cabin. Their perhaps-too-comfortable lifestyle (Ben pees on Jenny's poison ivy rash in the shower) is quickly upended. After running into Nate at Ravi's party, he finds her dancing along to world music in a record shop and asks her out to dinner. Soon he's telling her all he's ever wanted was a nice Jewish Italian girl to sit on the couch with to watch 'Mad About You.' Dana succumbs to the danger. Meanwhile Pat's (Edie Falco) frustrated with Alan's reluctance to discipline Ali, who keeps a stash of goth wear in the stairwell to sneak out clubbing. She's dipped into heroin and sleeping with Jed (Marquis Rodriguez, "3 Generations") while refusing to call him her boyfriend. One night Dana is surprised to find them having sex in the family's country home. Jed's dispatched back to the city and the bickering sisters bond over shared secrets. Dana covers for Ali and tells Pat she's moving back home for a while. Two events bring everything to a head. Copywriter Alan is failed playwright with hopes his latest will get him back in the game. He invites the entire family to a reading where they learn that not only is he not very good, but that the woman reading his words is the mysterious 'C' in the erotic files found by Ali. Dressed as California raisins for Halloween night, Dana learns just how much trouble Ali's gotten into. She's also so touched when Ben shows up in a raisin box, she blurts out the truth, Nate having ironically turned her off with his disbelief in monogamy. The three women share secret smokes in the Jacobs family bathroom. "Landline" is filled to the brim with insights into human behavior and Holm and Robespierre have crafted some so-truthful-it-hurts dialogue. Pat's cutting words to Alan aren't even remembered when he slings them back as he stands revealed. As the harried, housekeeping mom, Falco casual dismissiveness of Alan is rooted in her maternal overcompensation. As the kind hearted dad, Turturro sees beneath the surface, recognizing the elemental wisdom of his teenaged daughter. Slate is best interacting with Quinn, the two at odds initially, finding sisterhood navigating their parents' breakdown. Quinn is a live wire, a snarky teen who courts danger a little too closely for comfort (she's also given a showcase for her lovely singing voice). Duplass does a complete 180 degrees from "Beatriz's" opportunistic lawyer while Wittrock escapes painting the good looking Nate as the bad guy. "Landline" closes with the family back together, a dinner at Benihana's celebrating Ali's eighteenth birthday. Robespierre keeps their futures uncertain, but forgiveness hangs in the air. Grade: