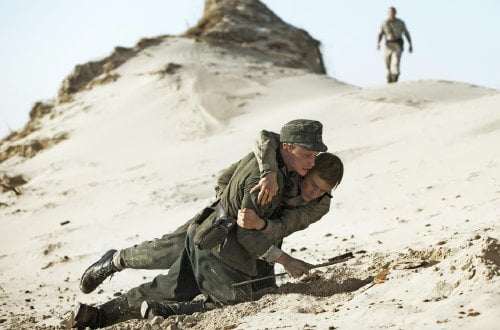 Immediately after WWII, Denmark faced the problem of removing over two million German land mines that peppered the country’s western coastline. The solution: forcibly recruit young German POWs to remove and defuse, at deadly personal danger, the explosives in “Land of Mine.”

It is May, 1945, five years after the end of WWII as Lt. Ebbe Jensen (Mikkel Boe Følsgaard, "A Royal Affair") tells young German POWs Sebastian, Helmut, Ludwig, Wilhelm and twins Ernst and Werner 'Denmark is not your friend. You have one purpose, to clear Denmark's coast of mines.' Writer/director Martin Zandvliet ("Applause") illuminates a little known piece of history, how Allied forces put little trained POWs to work defusing land mines, flouting the Geneva Convention. More than half of them were killed or severely wounded, more fatalities than the entire German occupation of Denmark. The film's title is a play on words, "Land of Mine." In Denmark's nominee for the Foreign Language Oscar, we see these young, jittery soldiers go through training with no compassion for their well being, expected to diffuse six mines an hour with starvation rations and a promise of being returned home after three months of dangerous labor. After driving the young men in his charge mercilessly, Sergeant Rasmussen's (Roland Møller) response to one of them losing their arms is to go fetch some morphine. But after learning of the boy's death, Rasmussen begins to grow a conscience, even standing up to a senior officer on their behalf. "Land of Mine" tells an important tale and Zandvliet admirably allows each of the POWs to become fully fledged characters, but what he hasn't done is told this story in a different way than the many other films examining the humanity between wartime enemies. It suffers from familiarity of structure, taking an expected path. But as senior officers and civilians alike shun the boys, Møller allows us into his character's realization that these are just scared kids, Rasmussen's every day exposure to the inhumanity shown them giving him advantage. Cinematographer Camilla Hjelm Knudsen, the director's wife, casts Zandvliet's characters in extreme dark and light, breaking up the monotony of her sand strewn location. Grade:

As a WWII history buff, I am always amazed to find out about some incident of that war that is not familiar to me. “Land of Mine” brings to light, in microcosm, the story of the 2000 German POWs forced, by the Danish government, to clear 2.2 million mines left by the defeated Nazi army. But, the POWs selected for the deadly task were not war-hardened veterans. Most were mere boys drafted in the Nazi’s last ditch effort to turn the tide of war. The 14 POWs assigned to Danish Sergeant Carl Rasmussen (Roland Moller) are just such children, unequipped for the task and never hardened by war. The sergeant, a paratrooper who saw his share of the horrors over the last six years, is not sympathetic to his wards and rules them with an iron hand. The story, written by director Martin Zandvliet, follows traditional guidelines as we meet the tough sergeant and his new wards, most recently his avowed enemy. There is no kindness toward the prisoners as he keeps them locked down, except when plying their new trade, and on little rations. One of the boys, a young army lieutenant, Sebastian Schumann, tries to improve their lot with the Danes but to no avail. It takes the loss of one boy, then another and another, before Rasmussen has a change of heart. Like the ten little Indians, the young prisoners are killed off one by one until just four remain. As their numbers dwindle and they endure the omnipresent threat of death, the battle-hardened sergeant begins to rethink how he feels about the boys. As he gets to know them, one by one only to have them killed, he sees that they are not fierce Nazi warriors. They are just teenage boys thrust into a war they were not prepared for, especially emotionally. Despite the constant theme of death, “Land of Mine” has a hopeful note in the end. It says something about understanding people, not just the ideology that made them enemies.