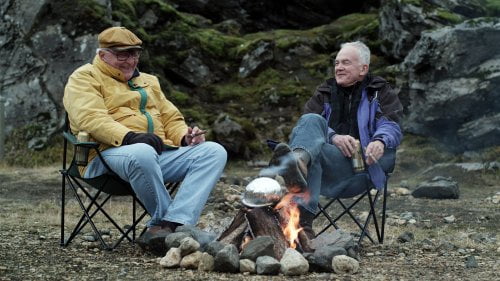 Quiet Australian Colin (Paul Eenhoorn, "This Is Martin Bonner") hasn't seen his 'ex' brother-in-law, garrulous Southerner Mitch (Earl Lynn Nelson), in years when he arrives for dinner and Mitch has a big surprise for him - he's booked first class tickets for the two of them to take a trip to Iceland in "Land Ho!"

Writer/directors Aaron Katz ("Cold Weather") and Martha Stephens's buddy comedy/road movie often feels like improvisation allowed to ramble on until its run out of gas. This intermittently funny, sometimes touching tale of two senior citizens who seize the day when they're not getting on each others nerves is most consistent as an Icelandic travelogue. It takes a while to figure out that Colin and Mitch were married to sisters - Mitch divorced his, but Colin's been in the dumps since the widower's second marriage failed. Mitch is an unfiltered, expansive type whose largess makes Colin uncomfortable. Just wait'll they get to Reykjavík, where Mitch has a Humvee waiting and is determined to keep company with young women when he's not off sneaking a doobie. Their first night's dinner in their hotel restaurant is like watching a married couple, each so enamored of what the other's ordered they end up switching plates when they're served. The next day's trip to an art gallery underlines their differences, Colin seeing despair in the paintings while Mitch, as is his wont, sexualizes everything. Mitch is excited to get an email from his cousin, Ellen (Karrie Crouse, "Quiet City"), who tells him she and a friend will be passing through the city the next day and Mitch agrees to pick them up, telling Colin they'll be squiring around some young hot chicks. When the two PhD students arrive, Mitch starts in again, demanding Ellen and Janet (Elizabeth McKee) take his credit card to buy themselves some dress up duds, but he's disappointed when their new outfits don't show enough skin. Colin, ever the gentleman, disagrees, and coaxes out stories of their studies. Janet tells a spooky tale that will parallel an experience the two old men have later on their trip. (The molecular gastronomy they enjoy while talking looks so enticing as to be almost a distraction.) After a night of disco and glow sticks, the girls are on their way and the dynamic duo set off to see the landscape (cue Big Country's 'In a Big Country'). Mitch can be maddening, but the two always manage to laugh things off, especially after Colin wades into water obscuring the road only to be showered by a local who revs right through. As they open up, we learn of regrets and disillusionments, but there's always something new on the horizon. When they meet up with a single Canadian photographer/vacationer Nadine (Alice Olivia Clarke), they agree to pose together in a hot spring and Mitch, for once, tactfully retreats, allowing Colin to act on his attraction. "Land Ho!" ends before the trip does. If at first this seems abrupt, on reflection it's appropriate. Just because youth has passed one by doesn't mean life has.