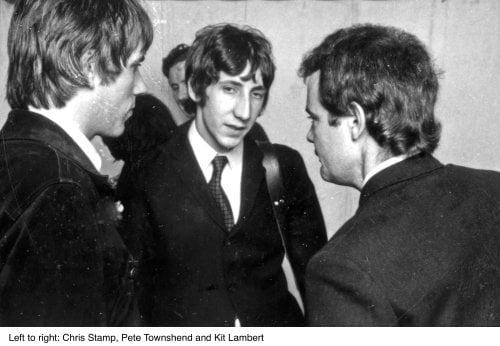 In 1960's London, the intellectual, Oxford-educated gay son of a famous conductor used to hanging with the aristocracy and the good looking, tough Cockney hetero son of a tugboat captain met as second assistant directors at Shepperton Studios and bonded over mutual appreciation of Jazz and the French New Wave. In their pursuit of a film subject, the two began shooting an unknown rock band with interesting fans, the High Numbers. But their film has never been shown until now, as the duo ended up becoming the band's managers, a partnership akin to Brian Epstein and George Martin rolled into one as they shaped the phenomenon that became The Who. They were "Lambert & Stamp."

Cinematographer James D. Cooper ("Brother's Keeper") takes on the directing reins with this lively, anecdote-laden look at a creative and emotional partnership which blossomed during the Swinging '60's before crumbling over the usual miscommunications and hurt feelings that seem to afflict all rock bands. Ten years in the making, four band members (Pete Townshend, Roger Daltrey, John Entwistle and Keith Moon) and their two managers are represented in the film by half of each's survivors (Chris Stamp, interviewed extensively, would also pass away before the film's release). You don't need to be fan of The Who to enjoy this documentary. It's universal themes include an analysis of opposites attracting, genius marketing, creative nurturing and the inevitable clashing dynamics of a rock 'n roll band. Stamp, younger brother of actor Terence, appears extensively, talking about his love of his partner and how Kit's homosexuality spurred him to open up more emotionally. Where Stamp had the look, Lambert had the language, seen here on German TV promoting the band in that country's native tongue. Even before they met they had odd counterbalances, Stamp having worked backstage at the ballet to pick up chicks while Lambert was the godson of prima ballerina Margot Fonteyn. These two guys, who frequently profess they had no idea what they were doing, made all the right moves, beginning with their pitch to the band members' parents with a contract that guaranteed a salary. While Stamp went off on film shoots to make money to support them (and Townshend's instrument smashing gimmick), Lambert used the tools of an aristocracy that often coasted with little cash (Townshend tells one amusing story of a high end wine shop that fails to charge him to this day, based on his early chi-chi address at Lambert's). Their real genius lay in not selling to the band's fans, but reflecting them, something The Who took up in their lyrics. Lambert and Stamp created the 100 Faces fan club, cherry picking the most intriguing individuals to mark The Who's 'brand.' They had so much inspired audacity, that when they wanted to sign Jimi Hendrix, they offered him a record deal, then created England's first independent label to realize it. Lambert helped shape Townshend's talent, exposing him to classical music, then urging him to write a rock opera. The biggest irony was that when "Tommy" became a film, the managers who'd originally wanted to be filmmakers were sidestepped, their band eventually acquiring ownership of the very film studio where their managers had met. The Who fired their management in 1974. Lambert went into a steep decline fueled by drugs and alcohol, eventually dying after a fall in 1981. In another ironic twist, the ten years during the making of this documentary helped heal old wounds, Stamp having been invited to join Daltrey and Townshend when The Who were honored at the Kennedy Center in 2008. Cooper, who shot the doc on Super 16, has a raw, energetic approach to the material which reflects the culture of his subjects' early days. Archival footage of Lambert is so skillfully woven in with more recent interviews (with Stamp, Townshend and Daltrey among others) that it feels like a current conversation. Despite the bitter ending of Lambert and Stamp's professional relationship with The Who, "Lambert & Stamp" the documentary celebrates the love. It's a joyous, engaging, clever piece of filmmaking, a finely cut gem of many facets. Grade:

You would have to live under a rock if you never heard of the legendary band The Who. But, even the best informed fans of that iconic band probably do not know who was responsible for the band’s creation and put them on the rock ‘n’ roll map of fame. Documentary filmmaker James D. Cooper corrects our ignorance with a look at the band’s beginning under the guidance and management of “Lambert & Stamp.” Kip Lambert and Chris Stamp were from opposite social spectrum. Kip hailed from an upper class family while Chris’s dad was a tugboat captain. But, the two young men had a common vision: to become filmmakers. Their plan was to make a documentary film of the birth of a rock ‘n’ roll band and follow its rise but financing put a halt to that. By then, though, the two men had discovered a band called the High Numbers and decided to change course and manage/mentor the ban that would become The Who. Filmmaker Cooper gathers the players from those early days in the evolution of rock music – Chris Stamp (brother of actor Terrence), Roger Daltry and Peter Townsend lead the modern day talking head interviews which are interspersed with footage from the day. Press conferences and television interviews, plus insightful footage of Lambert, Stamp and the original members of the Who – Daltry, Townsend, John Entwhistle and Keith Moon – are used to tell the stories of Kip Lambert and Chris Stamp, as well as a “History of the Who.” “Lambert & Stamp” is a niche film, but it is a big niche with generations of Who fans that have been loyal to the band for decades – some of my friends have followed the band from near the beginning, buying their CDs and merrily shelling out a lot of bucks to see them in concert. But, the film will also have great appeal to fans of documentary films, especially those who also love music.