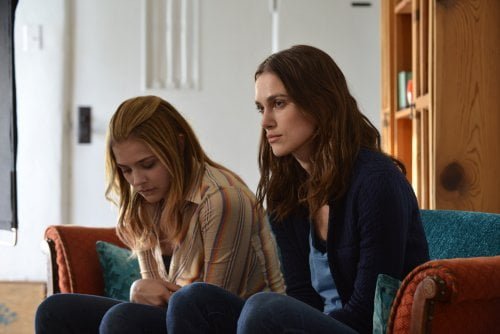 Megan (Kiera Knightly) had the world by the tail when she graduated high school. But, now, 10 years later, she is a ship without a rudder, drifting aimlessly through the sea of life. When her boyfriend, Anthony (Mark Webber), asks her to marry, she balks and buys for time. She meets 15-year old Annika (Chloe Grace Moretz), and she forms a plan to get that time in “Laggies.”

At the age of 28, rootless Megan (Keira Knightley, "Begin Again") realizes she's appalled by the high school friends she still hangs around with. When Allison's (Ellie Kemper, TV's 'The Office') wedding sparks her boyfriend Anthony's (Mark Webber, "Scott Pilgrim vs. the World") proposal she panics, going underground for a week at the home of the 16 year-old, Annika (Chloë Grace Moretz, "If I Stay"), she bought beer for the night before in "Laggies." Keira Knightley's having a year for romantic comedies. In Lynn Shelton's ("Humpday," "Your Sister's Sister") latest (the first she hasn't written), she's engagingly loose as a woman escaping her own high school malaise by diving right back into the life. Shelton's opening credits look back at Megan's prom night and wraps after Annika's. In between, Megan finds herself by mentoring her new young friend with what's she's learned along the way while a new, albeit somewhat complicated, romantic prospect presents itself in Annika's dad. YA novelist Andrea Seigel's central idea - that of taking an adult whose degree hasn't turned into a career (Megan twirls a sign promoting her dad's accounting firm) and having her grow up by returning to her high school years - is a good one, but it falls into the trap of having Megan 'grow up' by finding a new man, her own career path still rolling out into uncharted waters (at least she provides a nice yin yang, Megan having ditched a career in marriage counseling when she couldn't relate to her clients with Craig's (Sam Rockwell, "The Way Way Back") work as a divorce lawyer). The film goes almost exactly where we expect it to go, but it's Knightley who keeps us engaged with some sharp support, notably from Kaitlyn Dever ("The Spectacular Now," "Short Term 12") as Annika's confident, blunt spoken bestie Misty. At the onset, Megan seems content to fritter away her time, crashing on her parents' sofa for some TV time. While her mom is concerned, her dad Ed (Jeff Garlin, HBO's 'Curb Your Enthusiasm') just seems happy to have her around, including her goofy stops in his office. Boyfriend Andrew also seems happy with the status quo. But Megan begins to get antsy as a member of Allison's wedding party. Allison's a shrew of a bride (Kemper's earnest wedding dance performance piece is a hoot), finding fault with her friend's bawdy jokes. After the triple whammy of Andrew's impending proposal, being asked to be godparents and then spying her dad in a compromising position, Megan leaves the wedding to buy rose petals for the honeymoon suite. Outside the store, she's approached by Annika to buy beer, then asked to hang with the four kids after proving adept with a skateboard. Annika, a bit lost still over the abandonment by her mother, is more than happy to lodge her new friend, but her dad's rightfully concerned by Megan's motivations. In a funny bit that echoes her engagement with her own father, Megan starts to win him over though and he allows her to stay in their guest room. Megan's neatly placed between Annika and her mom, first masquerading for a guidance counselor from whom she seems as much a client as her 'daughter,' then later guiding the real deal, Bethany (Gretchen Mol, HBO's 'Boardwalk Empire'), during an awkward, touching surprise visit. Her rights of passage find her making the types of mistake that act as learning tools for Annika and her friends (although her final bit of advice to Annika is harshly realized at the expense of another). Shelton unveils a different side of Seattle in her most commercial film, using the Chihuly Museum for a wedding and more cookie cutter middle class neighborhoods than her earlier characters would be found in. Ronald Leamon's costuming isolates Knightley as an adolescent until she picks a 'prom' dress that, while still girlish, suggests a different type of event. "Laggies" is an odd departure for Shelton, an unusual premise relayed in more routine storytelling beats, but she's cast it well and Knightley shines.

Kiera Knightley is perfect as a 28-year old woman who is, finally, coming of age. After high school, her friends all went on to living normal lives – get married and raise a family. Megan, on the other hand, works as a helper, and sometimes sign spinner, for her tax attorney single dad (Jeff Garlin), and has a live-in boyfriend. Her chance encounter with Annika – Megan buys booze for the underage girl and her friends – gives her the chance to change her life and make right decisions. She does not. There are several dynamics going on in director Lynn Shelton’s story, by Andrea Seigel, as Megan struggles to find herself – her odd friendship with a young teen and her friends; Megan’s discovery of her father with another woman; her confused relationship with Anthony; and, most of all, her relationship with Annika’s divorce lawyer dad, Craig (Sam Rockwell). Things go in a predictable, but not clichéd, ways for Megan as, over her week stay with Annika and Craig, finally finds the direction in her life. You root for Megan despite her foibles – like lying all the time to others and herself. The whole cast does a first-rate job in inhabiting their characters. But one role stands out - Annika’s BFF Misty (Kaitlyn Dever) is a real spark every time she is on the screen, which is, sadly, limited. Although “Laggies” will attract a sizable femme audience, the guys should not reject it out of hand as a chick flick. Knightley’s character Megan could have easily been switched for a male actor. The problems that Megan faces – indecision and no grasp, yet, on the direction of her life – are the same we all do at one time or another as we grow into adulthood. I hope it gets the broader audience it deserves.