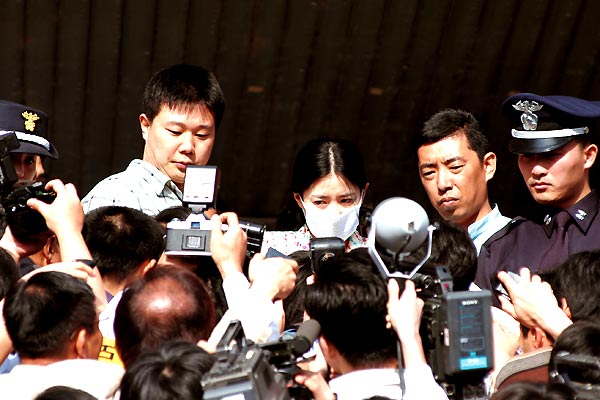 At the age of nineteen, Geum-ja Lee (Yeong-ae Lee, "Joint Security Area") is convicted of the kidnapping and murder of a six year old boy. After fourteen years in an all female prison, where her angelic demeanor has been much commented upon, Geum-ja is released and plots her rebirth as "Lady Vengeance."

Director Chan-wook Park ("Oldboy") ends his revenge trilogy with a stylish, female centric psychological thriller set to classical music which more often harkens back to the initial outing, "Sympathy for Mr. Vengeance," than to ultra-violent midsection "Oldboy." The time shifting tale will keep viewers on their toes as clues to what really happened to Geum-ja add up and set the stage for the trilogy's most outrageous comeuppance. The film begins as Geum-ja is released from prison to a choir of Santa Clauses (the bright red and white of the costumes symbolize Geum-ja's two personas) led by the over the top Preacher Jeon (Byeong-ok Kim, "Oldboy"), whose offering of ritualistically 'cleansing' tofu is most harshly rejected. Park flashes back to the media circus which fed upon his heroine's arrest, flits into her surreal and violent dreams then lets the blood flow as Geum-ja begs for forgiveness from her victim's parents by cutting off her finger in their apartment. But Geum-ja's 'crime' is not what it appears, as we will see later when Park revisits her trial when she recreates her crime for horrified observers. First, though, we meet Geum-ja's fellow inmates, one of whom will assist her on the outside and one of whom will really turn her into a killer. Geum-ja saves a woman from the big bull-dyke (Go Su-heui) who rules the roost (Park's flashback to this woman's crime - killing her husband and his mistress, then eating them - is abrupt and blackly humorous, like an outtake from "Kung Fu Hustle."). She cares for a North Korean spy with Alzheimers and befriends a bank robber (Kim Bu-seon, whose crime reenactment is a wildly imagined highlight) whose husband will design Lee's unique double-barrelled gun. Her target? A schoolteacher, Mr. Baek ("Oldboy" star, Min-sik Choi), whom she turned to as a pregnant schoolgirl. After a twisted interlude where Geum-ja gets her daughter, Jenny (Yea-young Kwon), back from Australian adoptive parents (Tony Barry, "Original Sin," and Anne Cordiner), Geum-ja reveals Baek's crimes (in a sequence parents may find very disturbing) and orchestrates her vengeance. Chan-wook Park and cowriter Seo-Gyeong Jeong weave common threads through the revenge trilogy. Vengeance is always on behalf of a child, the crimes more damning as the film's progress. Kidnapping is present in the first and third (we are told that there are 'good kidnappings and bad kidnappings' in both) and teenage pregnancies factor in the second and third. Religion and class are underlying themes in all three and the director uses different points of view in each, refusing, particularly in the first two, to paint his perpetrator and avenger in black and white. It is ironic that "Oldboy," the weakest of the trilogy, is its best known entry. "Lady Vengeance" is the most startlingly visualized (Cinematography by Jeong-hun Jeong "Oldboy," "Three... Extremes") and evokes all register of emotion in the viewer while "Sympathy for Mr. Vengeance" is the most political and despairing. See all three, but "Lady Vengeance" is a thing of humor and shadows, a unique and mind-blowing treat in and of itself.

A young woman, Geum-Ja Lee (Yeong-Ae Lee), was convicted of child abduction and murder, protecting her accomplice Mr. Baek (Min-Sik Choi), and, because of his betrayal, is sentenced to 13 years in prison. Once inside, she befriends all of the other inmates and takes on the lowliest tasks, securing her their friendship and loyalty as she plots revenge on her betrayer. When she is released, she sets her plan into motion, with the help of her friends, as she becomes Lady Vengeance.” This is the third installment in Korean director Chan-Wook Park’s trilogy of revenge, preceded by Sympathy for Mr. Vengeance” and the notorious Oldboy” (where the hero/anti-hero actually eats a live octopus). The helmer takes a feminist stance with his latest. Geum-Ja was an impressionable, easily manipulated 19-year old when she was arrested for the heinous murder of their little captive. When interrogated as to why she committed the crime – smothering the boy with a pillow – her only excuse was “I wanted to stop him crying!” The court throws the book at her while Mr. Baek, her former teacher, walks free. To keep her from turning him in for the crime, he has an ace in the hole: he holds Geum-Ja’s baby as a hostage in exchange for her silence about his complicity in the death of the six-year old child. Geum-Ja’s time in stir is used to good stead as she establishes herself as the “kind Ms. Geum-Ja,” showing compassion and the willingness to take on any job – including caring for an elderly, Alzheimer’s-suffering inmate who bestows a valuable document upon her caretaker. The document will prove to be an important tool in Geum-Ja’s plan for revenge. Once released from prison after 13 years confinement she starts the vengeance wheels turning, calling in favors from her friends released from prison. The inexorability of the plan is well told. Lady Vengeance” is a solid finale for Park’s trilogy but is a little confused with its rapid and frequent flash backs and flashes forwards. Without too much by way of linear storytelling I got a little muddled trying to keep the chronologies of the tale straight. But, a fine performance by Yeong-ai Lee as the title Lady keeps things together as the story, by the director and Seo-Gyeong Jeong, paints her plan for revenge in a complicated, compelling way. There is little by way of surprise in the final outcome but getting there is a ride. The poetic nature of the yarn, deftly handled by director Park, shows the Lady’s vengeance in a sentimental light as, while meting out her revenge, she comes to understand the love of those who help her. It took me a couple of times watching “Lady Vengeance” for this to sink in but the result is satisfying in its conclusion. I liked “Sympathy for Mr. Vengeance” a bit more, though the last chapter of that film was less than the rest. But, the final part of Park’s trilogy is the best rounded of the three. It’s not nearly as gut wrenching or darkly funny as Oldboy” but is also more appealing.