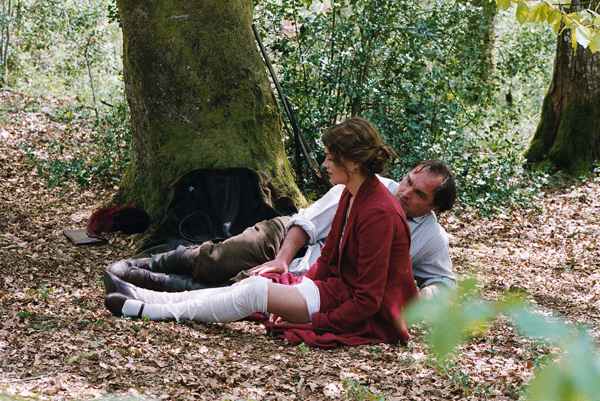 Cowriter (with Roger Bohbot, "Kings & Queen")/director Pascale Ferran adapts D.H. Lawrence's little known middle version of the novel most only know as the once-banned "Lady Chatterley's Lover." "John Thomas and Lady Jane" is regarded as the most tender of his three versions telling the tale of the roughly hewn gamekeeper who comes to love "Lady Chatterley."

Female director Ferran explains that she was drawn to this, second version of Lawrence's story because the characters were more obviously from different worlds and experienced, rather than talked about, their blossoming under each other's influence. She has dynamically yet lyrically evoked this in her beautiful film which illustrates the nurturing necessity of the natural and physical in addition to the societal and intellectual. Constance Chatterley (Marina Hands, "The Barbarian Invasions") is introduced as a young devoted and demure wife. Her husband, Clifford (Hippolyte Girardot, "The Moustache," "Paris, je t'aime") has returned from the war in a wheelchair. Their physical intimacy now consists of her giving him sponge baths. Clifford is content, but Connie begins to bristle and when her sister Hilda (Hélène Fillières, "Vendredi soir") threatens to remove her to London, Clifford relents and hires a nurse, Mrs. Bolton (Hélène Alexandridis, "They Came Back"). Her time now freer, Connie begins to explore the grounds of their estate, and is taken aback when, outside the gamekeeper's hut, she spies Parkin (Jean-Louis Coulloc'h, a kind of Gallic Klaus Maria Brandauer type) washing, naked from the waist up, and flees (note the sexual connection to her husband here). But, thankfully for us, she returns to the hut and begins a slow, initially nonverbal relationship with the man who chops wood and tends to birds. When, huddled over a group of newborn chicks, Connie becomes emotional over the little bird's innocent trust, Parkin is overcome and their relationship becomes physical. But there is always that issue of class which keeps him wary of her feelings, even as we see her discuss such things as the plight of miners employed by Lord Chatterley and the merits of socialism with her husband. Exposure to the natural world and the working people living within it expand Lady Chatterley's intellectual curiosity and make her want to experience more. She begins to yearn for a child. Ferran's film is a feminist awakening beautifully photographed by Julien Hirsch ("Notre musique"). Editors Yann Dedet and Mathilde Muyard frequently use cut to blacks between short scenes to enhance our perception of the senses in these little snippets and Hirsch's camera settles in quite close so that along with Parkin we observe a slight sheen of sweat on Connie's skin. The sex scenes are frank but not exploitative and begin very clothed, progressing gradually to nudity and exploration of the body (with flowers!). The actors are all very good, from Girardot's sense of entitlement to Alexandridis's disapproving air, but the film revolves around Hands, whose forthright eyes, happiness and sense of fairness ensure the character is always sympathetic. She has fortitude without ever losing femininity. Jean-Louis Coulloc'h is an able partner, rugged yet gentle, quiet but expressive. This winner of 5 Cesar awards, including Best Picture and Best Actress, runs almost three hours, yet never seems overlong. Ferran keeps the indoors domestic drama and its counterpointed outdoors romance engaging without tipping into melodrama and Hirsch keeps it a delight for the eyes with such visual wonders as a long shot of a silhouetted Constance suddenly exploding into red as she exits a gate and the light hits her. "Lady Chatterley" is a work of refined sensuality.