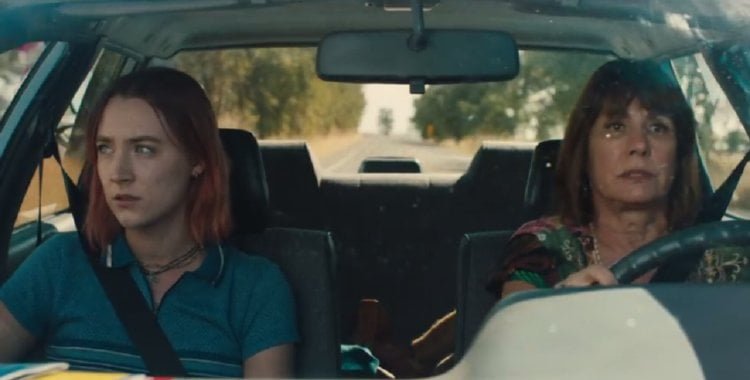 Christine McPherson (Saoirse Ronan, "Brooklyn") is in her senior year at a Catholic high school that tolerates her rebellious ways. It's 2002 and her dad Larry (Tracy Letts, "The Lovers") is suffering in the current economic climate. Christine's hatred of Sacramento and dream of a liberal arts college on the East Coast are just two of the things driving a wedge in her relationship with her mother, Marion (Laurie Metcalf, TV's 'Roseanne,' 'The Big Bang Theory'), and her attractions to the wrong boys alienates her best friend Julie (Beanie Feldstein, "Neighbors 2: Sorority Rising"). Trying to redefine herself, Christine insists that her name is now "Lady Bird."

Writer/director Greta Gerwig who cowrote and codirected "Nights and Weekends" with Joe Swanberg before collaborating with Noah Baumbach, makes her solo directorial debut with a film steeped in her own experience, Gerwig having left Sacramento for a NYC liberal arts education. Her intriguingly cast coming of age comedy gives many a setting to shine, none more so than star Ronan, the Brooklyn born, Irish bred actress Oscar nominated twice by her 21st birthday. Gerwig's manic energy is evident in her pacing, one scene barreling giddily into the next (editing by Nick Houy, HBO's 'The Night Of'). Lady Bird spends her days playing pranks on nuns, struggling through Mr. Bruno's (Jake McDorman, "American Sniper") math class and amusing her college counselor with her grand notions. On the way home from school, she and Julie admire the stately old homes on the right side of the tracks, choosing a sprawling blue colonial as her dream home. Advised to try drama, Lady Bird fits right in with Father Leviatch's (Stephen Henderson, "Fences") troop, immediately zeroing in on the musical production's star Danny (Lucas Hedges, "Manchester by the Sea"). Despite her costarring role, Julie cedes interest. Danny and Lady Bird become an item, Christine thrilled to learn that her invite to Danny's grandmother's Thanksgiving is in the very home she's coveted. Back on the wrong side of the tracks (Danny's delighted to learn there are actually railroad tracks separating their neighborhoods), Lady Bird enlists her dad's help filling out financial aid forms for colleges way outside her mom's comfort zone. A trip to the thrift store with mom for a date dress is a study in love and bickering, Marion tailoring their purchase as she frets over her daughter's holiday absence. But the after party for Danny and Lady Bird's musical dashes her hopes for their romance. She turns her attentions to hipster band leader Kyle (Timothée Chalamet, "Men, Women & Children"), ditching Julie for the sexually experienced Jenna (Odeya Rush, "The Giver"), an in to his circle. Gerwig's stuffed a lot of story into her 93 minute comedy, yet it never feels overpacked nor have any of her cast been given short shrift, a remarkable achievement. Letts, never better, and the always reliable Metcalf are fully fleshed, not just for their good cop/bad cop parenting but for their own anxieties and dashed dreams. The family is further defined by Lady Bird's older brother, Miguel (Jordan Rodrigues, TV's 'The Fosters') whose obvious adoption is never commented upon, and his girlfriend Shelly (Marielle Scott), a family member since her own parents disowned her over premarital sex. Sister Sarah Joan (Lois Smith, "The Nice Guys") is only in two or three scenes but her interactions with Lady Bird tell us much about them both. All the adults at school make an impression, only Father Walther (Bob Stephenson, "Battle of the Sexes") played for laughs as the Football Coach takes on Leviatch's drama duties. ("Patti Cake$'s" extraordinary Danielle Macdonald is oddly featured in a 'blink and you'll miss her' appearance.) Gerwig also mines comedy and drama in her details, making hay with Howard Zinn's 'A People's History of the United States,' a corner convenience store and Sacramento itself, which Lady Bird refers to as 'the Midwest of Northern California.' But is it the red-haired Ronan who pulls everything together as her hilarious self-centeredness gives way to maturing self awareness. "Lady Bird" is this year's "Edge of Seventeen." Grade: