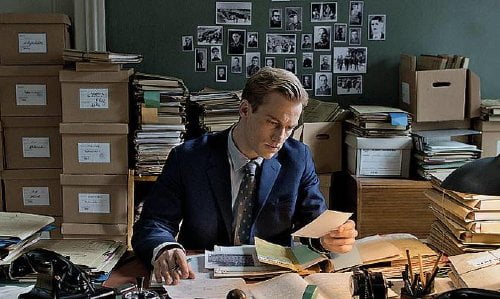 1958. A man, artist Simon Kirsch (Johannes Krisch), walks past a private school in Frankfurt and is stopped in his tracks when he comes face to face with the man responsible for the death of his wife and twin daughters fifteen years before at Auschwitz. This unexpected confrontation has repercussions that will resonate across West Germany and impact the lives of thousands in its “Labyrinth of Lies.”

When the Jewish friend of a Frankfurt reporter recognizes a schoolteacher as a former Auschwitz guard, young public prosecutor Johann Radmann's (Alexander Fehling, "Inglourious Basterds") off the books investigation lands him in hot water with his boss, Fritz Bauer (Gert Voss). But after Radmann secures a list of SS officers who served there, Bauer officially moves him from traffic violations to crimes committed at the camp. Although few in 1958 Germany had even heard of Auschwitz, powerful people were protecting perpetrators, leading Radmann into a "Labyrinth of Lies." Cowriter (with Elisabeth Bartel)/director Giulio Ricciarelli's feature film debut is based on a great story, one in which a country reveling in its economic resurgence is forced to face its recent, horrific past. The resulting film, though, which uses its fictional composite character of Radmann as an exhibit of bravery drowning in a sea of denial and coverup, suffers from building drama in fits and starts, losing steam when it should have come to a head. The love interest assigned to Radmann, Friederike Becht's ("The Reader," "Hannah Arendt") Marlene, is meant to symbolize the German mindset circa 1960, but the romance distracts from the central story, which ends just as the Auschwitz trials begin. Ending title credits do not have the same impact as seeing years of work which caused people to turn against the prosecutors bring so few to justice. After commissioning every phone book in Germany, the first man Radmann tracks down is a small town baker. But when he and the reporter Thomas Gnielka (André Szymanski) bring home the Jewish friend, Simon Kirsch (Johannes Krisch, "Revanche"), drunk from a party at Gnielka's home, Radmann learns about Simon's twin daughters, who he willingly handed off to Dr. Josef Mengele believing they'd be safe. From that point on Radmann's obsession with catching Mengele, who frequently returned to his home town of Günzburg from South America, leads him astray from Bauer's goal to try ordinary German people who had committed horrific crimes and, in fact, Radmann fails to issue a warrant in time to arrest the baker. Bauer, who was quietly working with Mossad, tells Radmann to leave Mengele to him, but Bauer is intent on catching Eichmann, the architect of the Final Solution. The film's entire theme can be summed up by one question posed to Radmann - 'Do you want every young man in this country to wonder whether his father was a murderer?' Marlene's father drowns his past in alcohol with war buddies. Radmann eventually is thunderstruck to learn that his own father was a member of the party, leading to nightmares that merge his dad with the twisted Auschwitz doctor. Soon Radmann has gone just about mad, believing everyone he sees is guilty. The film is at its best contrasting camp survivor's stories with the actions of those, like the police, who see no reason to press charges or criminals who exhibit arrogance rather than remorse. The banality of evil is on view everywhere, yet where is the line drawn? Even the Americans, represented here by Major Parker (Tim Williams, "Valkyrie," "The Apparition"), keeper of the SS files, appear to believe that Radmann's chasing shadows. That teacher who instigated the investigation? Radmann's able to identify him in a photo separating those who will live from those who will be sent to the gas chambers. But portraying him barking orders while separating schoolchildren into two lines right before he's arrested hits us over the head (a later bit of cringe worthy writing uses the repair of a suit jacket as a metaphor for fixing a relationship). Lead Fehling, whose character dives into the bottle before regaining his commitment, is less interesting than Johann von Bülow, who plays his more morally conflicted partner Otto Haller. The film is completely stolen by Hansi Jochmann ("Shining Through") as the secretary Schmittchen, whose reaction to witness testimony is stark evidence of how little the German public actually knew of the extent of Nazi war crimes. It may be surprising to many to learn that Germany was the first country to try its own war criminals, yet it continues to struggle with its past. Ricciarelli's feature film debut has been chosen as Germany's submission for the Foreign Language Oscar. Grade:

I am a World War II history buff and quite familiar the events that took place during the war. But, after seeing “Labyrinth of Lies,” I realized that the years after the war – what happened to all the Nazis not charged with war crimes? – are, for me, only vague recollections of the Wolverine vigilantes and Odessa, the post-war flight of high ranking Nazi. First time director Giulio Ricciarelli, using the screen story by Elisabeth Bartel, focuses on ambitious, newly-appointed state prosecutor, Johann Radmann (Alexander Fehling). He stumbles upon Simon Kirsch’s case against the teacher Schulz (Hartmut Volle) and, without official authority, looks into the charges. This moment of legal curiosity is the catalyst that will rock the West German government to its foundation. The investigation that brought ex-Nazis, some prominent in the government, to trial for the murders committed at the notorious death camp at Auschwitz during the war is done with serious earnestness. Radmann begins his investigation, approved by the Attorney General, first on Schulz. As more evidence and testimony comes to light, it snowballs beyond imagination. The question is not 'Who was a Nazi? but 'Who wasn’t?' The intensity and scope of the investigative side of “Labyrinth of Lies” reminded me of Alan J. Pakula’s 1976 “All the President’s Men,” with an attorney instead of reporters shaking the country’s political foundations. The side story in “Labyrinth of Lies” involves Johann and a pretty young seamstress, Marlene (Friederike Becht), who has ambitions, with Rodmann’s connections, to be a fashion designer. This relationship, while it is meant to show Johans’s sensitive side, is a distraction from the real meat of the film. The director shows enthusiasm but need more maturing in structure and focus. That said, “Labyrinth of Lies” is an ambitious first work and