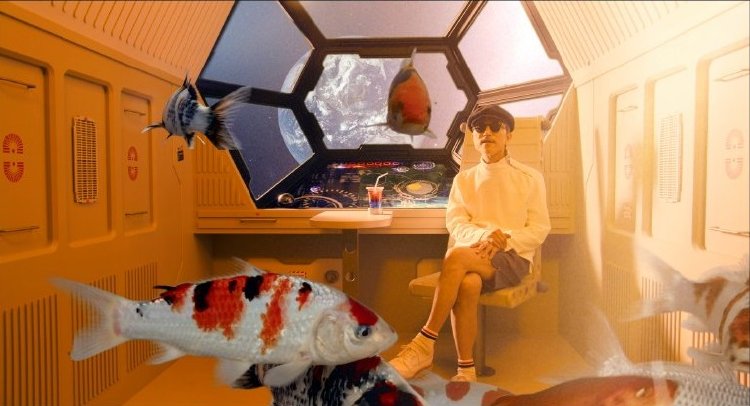 In a small cinema in the seaside town of Onomichi overseen by Auntie Pika, whose cigarettes and potatoes provide its distinctive odor, a full house gathers during a wild storm for a marathon of Japanese war cinema.  13 year-old Noriko (Rei Yoshida) greets Mario (Takuro Atsuki) outside and Shigeru (Yoshihiko Hosoda), a Yakuza in a bold floral suit, takes refuge inside, sitting right in front of bespectacled film historian Hosuke (Takahito Hosoyamada).  When a lightning bolt hits the theater, they will all find themselves transported into films which both reflect and influence Japan’s history in a psychedelic “Labyrinth of Cinema.”

Following the war trilogy that wrapped with “Hanagatami,” in his final film writer/director Nobuhiko Obayashi ("House/Hausu”) once again makes his strong anti-war sentiments very clear while being riotously entertaining – if you can keep up with it.  The first half of this three hour epic is so frenetically paced, one begins to wonder if it might induce seizures like that Pokemon cartoon back in 1997.  Obayashi appears to realize this, as just as we’re about to be left in the dust by his cinematic cyclone, he stops for an intermission, his pace slowing down considerably in his second half.

That’s not to say it isn’t worth your while to hang on for such bizarre delights as our guide, Fanta G (Yukihiro Takahashi), landing in his spaceship filled with floating koi, or Obayashi’s fantastical collage-like green screen assemblages of past and present, ‘reality’ and ‘film.’  His comic trio yanked from the audience skip across centuries, each fulfilling his own role – Mario saving and romancing Noriko (once as Tarzan!), Shigeru being the warrior who, as our observer Hosuke notes, masks his fear with bravado.  They find themselves as everything from samurai to soldiers, crossing paths with undercover princesses, Chinese spies and cruel brothel madams in films ranging from the silent era (‘What is this? I can hear my voice!’ proclaims one transitioning into talkies) through wartime propaganda (where we learn short ends of film are edited together due to a steel shortage, a process Obayashi cheekily informs us is called ‘streaming’) to the present. The film’s score, too, is wildly eccentric, comprised of everything from ahooga horns to corny pop jazz to out of tune piano, the latter contributed by the cinema’s 209 year-old pianist (Obayashi).

Obayashi softens depictions of extreme violence by presenting it cartoonishly, gushes of fake blood accompanied by characters screaming ‘ouch!’  But he doesn’t soften its emotional blow, one scene of his trio sharing watermelon with kids on a beach haunted by the ‘honorable floater’ (aka corpse) in its foreground.  Chuya Nakahara’s poetry comments throughout, never more poignantly than with ‘My Sadness Has Been Tainted.’  As we watch characters from across the ages all head towards Obayashi’s birthplace of Hiroshima, he startles with a quiet shot of Enola Gay passing overhead.

The film which begins with an exuberant tribute to Obayashi’s pal, Tony award winning tap dancer Hinton Battle, returns to him, but also, unfortunately, preaches for its last half hour when the filmmaker’s message has already come through loudly and clearly.  But the work of the late 82 year-old director is so bursting with imagination as it balances education with entertainment, that he can be forgiven his late breaking indulgence.  “Labyrinth of Cinema” is a worthy capper to the career of a true cinematic maverick.

Three strangers seek shelter from a raging storm in an old cinema in Hiroshima about to go out of business. It is the last night for the movie house and they are showing old war movies. A flash of lightning and a clap of thunder and the three are no longer observers of but participants in the “Labyrinth of Cinema.”

Nobuhiko Obayashi directed, and co-wrote with Kazuya Konaka and Tadashi Naito, this his last work while undergoing cancer treatment prior to his death, at 82, 2020. In it, he seems to be pulling out all the stops and throwing in, among many other things (like big musical dance numbers), the history of Japan from feudal times to the Japanese military expansion into China to that fateful event on 6 August 1945.

Obayashi does this by restaging old Japanese war movies, using the cinemagoers as characters in the several stories to be both observers and participants. His tale(s) puts on vivid display his strong anti-war sentiments that have been present for his long, 60+ year career. He has an awful lot to say and throws it all at you for a minute shy of three hours.

“Labyrinth of Cinema” is good film for us movie buffs out there but it may be too long a slog for the average movie lover, especially because the octogenarian spends the last hour preaching his philosophy and political stance. There is a two hour film buried in here and I wish Obayashi dug up that one.

"Labyrinth of Cinema" is available to stream on Mubi, is on blu-ray from Crescendo House and will be shown at the Brattle Cinema on 1/15/22.