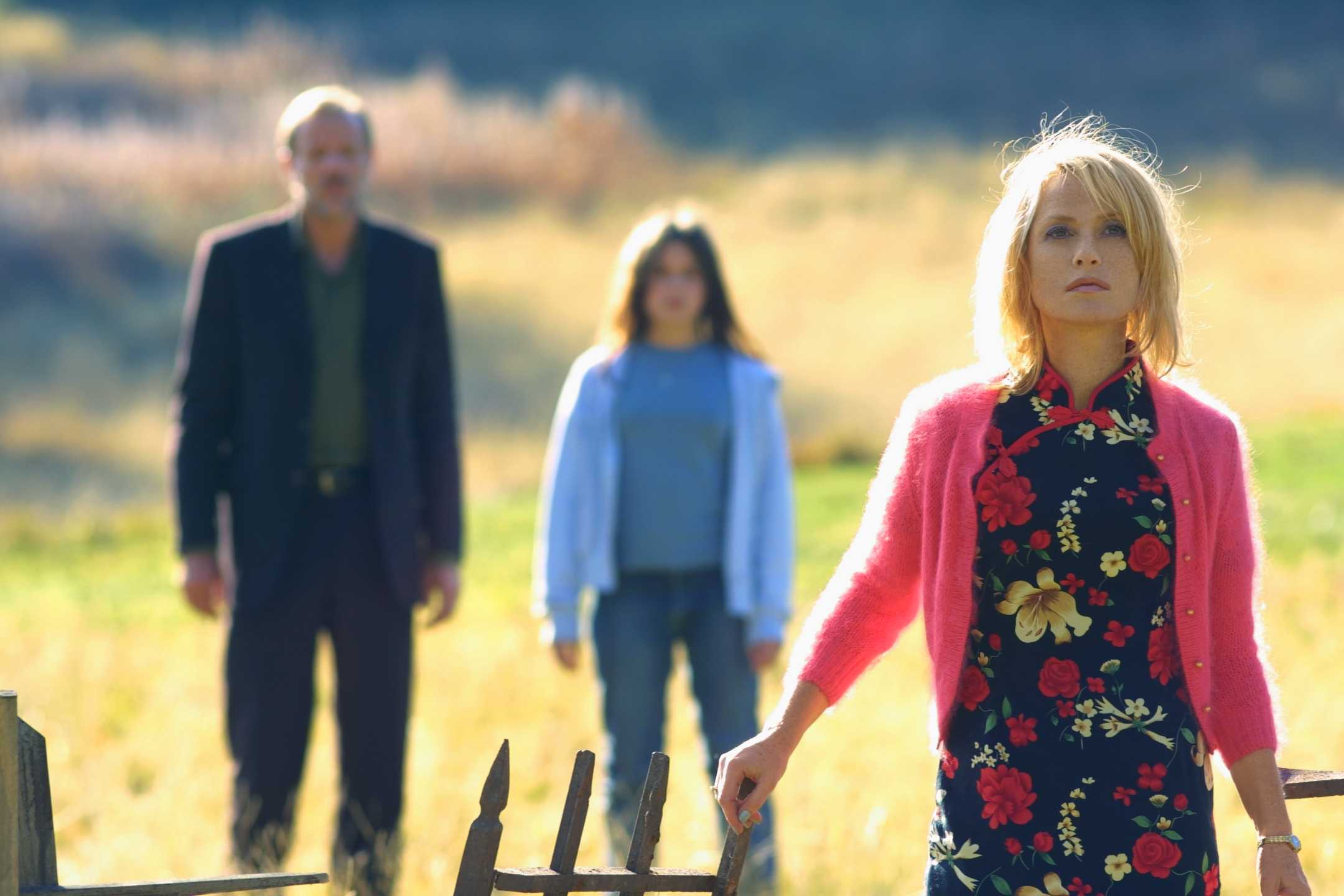 Thirteen year old Laurence (Maud Forget) is a foster child yearning to reconnect with her birth mother Sylvia (Isabelle Huppert, "Time of the Wolf"), a cold-hearted prostitute who rebuffs her. One day Laurence hides in Sylvia's apartment and overhears a menacing exchange between her mother and two pimps demanding money. Laurence suddenly appears and stabs one of the men to death while the other flees. Sylvia is forced to deal with her daughter on an unanticipated road trip during which she will find her past and "La Vie Promise."

Cowriter (with Agnès Fustier-Dahan) Olivier Dahan's ("Crimson Rivers 2") awkwardly pretentious direction is overcome by the fabulous performances of his three stars. Isabelle Huppert's arc of flinty survival to acceptance of maternal love and romantic possibilities pulls "La Vie Promise" above a forced, self-conscious attempt at art. After the Lana Turner/Johnny Stompanato-inspired intro, "La Vie Promise" turns into a crisscrossed road movie among three characters. Sylvia turns to ex-prostie Sandra (Fabienne Babe, "Les Voleurs"), since settled in the country, for help, but she cannot take the two in. Instead Sandra encourages Sylvia to seek out Piotr (André Marcon, "Les Destinées"), the man who Sylvia spurned for her current life in Nice. Laurence becomes fed up with her mother's inability to provide what she needs and takes off in the middle of nowhere. Sylvia continues hitching towards Piotr's last known whereabouts and has a run in with Joshua (Pascal Greggory, "The Messenger: The Story of Joan of Arc") when she tries to steal his car at a gas station. Joshua (ironically, a thief himself) gives Sylvia a ride, then later comes to Laurence's aid when she's being harassed by teenaged boys. Laurence recognizes the handbag her mother left behind in Joshua's car and the odd pair begin to search for Sylvia with the same vague directions Sylvia had for Piotr. Dahan jerkily jumps back and forth between his travelers, but when their paths meet, his film finally begins to gain coherence. 'I found my memory in a medical file' Sylvia tells us and once she, and we, have been given a reason for her emotional shutdown, Sylvia's ability to reconsider and reconnect to love feels natural and unfolds with a bittersweet visit to the past and hopeful look towards the future. Huppert is a great actress and "La vie Promise" gives her a character that moves from steely cold to blushing warmth. She makes Sylvia two completely different woman, from one who is ready to ditch a daughter in the throws of a seizure to one who almost shyly takes the girl's hand, without making the performance seem schizophrenic. Maud Forget has a strong debut as Laurence, self-reliant by necessity but yearning for a mother's love. Both are strongly supported by Greggory who remains always a little mysterious yet slowly and quietly builds trust. Dahan has tried to incorporate two themes upon which to lay Sylvia's story. A young girl's voice narrates the symbolic meaning of several flowers over the film's opening credits and Dahan ties flower imagery to Sylvia throughout. While not subtly handled, the flowers have meaning when Sylvia's past is revealed, although strangely, Dahan neglects to tie his flowers to their meaning within the story. Even less well integrated, no matter how relevant, are the ham handed "Wizard of Oz" references to Kansas-like farm scenes, rainbows, poppies (looping back to the first theme) and even a cringe-inducing line of dialogue ('I'm over the rainbow, just like in the song!') Technically the film has a split personality. Banal ballads played too loudly in the first half are replaced by effectively incorporated selections in the second. Jerky camera work used for no particular reason (one shot of Joshua is so violently unsteady it recalls the creepy vibrating heads of Lynch's "Lost Highway") is juxtaposed with stunningly framed widescreen landscapes. "La Vie Promise" is saved by a cast that bring its story to life despite the unsteady hand which guides them.

The voice of a young girl recites the name and colors of all kinds of flowers. On the screen is a scene of street hookers plying their trade along the side of the road in Nice. One of the prostitutes, Sylvia (Isabelle Huppert), heads home after a long night’s work to be met by her estranged, illegitimate daughter, Laurence (Maud Forget). When Sylvia’s pimp roughs her up over owed money, Laurence comes to her mother’s defense and stabs the man. Afraid of the retribution from her daughter’s act, Sylvia and Laurence must go on the lam in “La Vie Promise.” Sylvia hurriedly packs her few possessions in a bag as she tries to save her and Laurence form what will be, certainly, unmerciful retribution for the pimp’s stabbing and possible murder. She calls an old friend and former colleague, Sandra (Fabienne Babe), who sympathizes with their plight but has a new life of her own and a husband who doesn’t care to hear about her past. Sandra helps as much as she can but Sylvia and Laurence must fend for themselves to survive. They begin a journey across France as the memory challenged Sylvia tries to remember where her last true love, Piotr (Andre Marcon), raising their son, lives. She has some letters from Piotr that Sandra saved for her but the clues are scant. The quietly raging conflict over Sylvia’s past abandonment of her daughter comes to the surface and, after yet another fight, Sylvia storms out, abandoning Laurence once again. As their paths part Sylvia regrets her rash action and she begins a search for Laurence. Meanwhile, the daughter starts her own search for her mother. Laurence is the luckier of the two when she is given a ride by Joshua (Pascal Gregory), a taciturn man who has his own secrets. He is, Laurence learns, an escaped convict who makes his living stealing cars. He has his own places to go and people to see but continues to help Laurence search for her mother. The come tantalizingly close as mother and daughter keep crossing paths but never hooking up. Eventually (and inevitably as they almost fall over each other at times) mother and daughter are rejoined and they continue their mission to find Piotr and uncover more clues about Sylvia’s past. Joshua sticks by mother and daughter as they get to the bottom of Sylvia’s unremembered past life. Helmer Olivier Dahan, with co-writer Agnes Fustier Dahan, creates a thoughtful road movie that is made up by a series of events about a mother and daughter, estranged for many years, finding each other. The telling is a bit disjointed as the two are, suddenly, together, then split up, then together, split up and, finally, happily together ever after. There is little emotional development by and for the two as they endlessly bicker and accuse. The affection that develops, finally, between them feels forced and not genuine. This is more the fault of the script than the actors. The character Joshua feels more symbolic than real as he willing agrees to help Sylvia and Laurence as driver and protector. He is a good man, despite his past, and you hope that he stays with them to begin a new life. The character is so much the strong and silent type that it is hard to get your arms around the Joshua, despite his sad, seen-a-hard-life visage. “La Vie Promise” is a road movie that holds little of the hope of its title despite its almost upbeat ending.