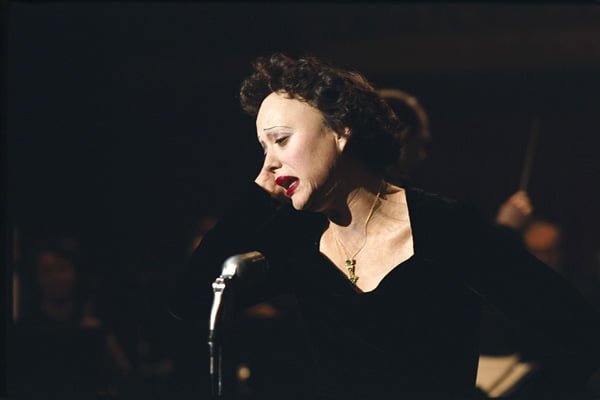 You are the darling of Paris!” says iconic movie star Marlene Dietrich to the lady once known as The Little Sparrow. Writer-director Olivier Dahan tells the story of France’s own music icon, Edith Piaf (Marian Cotillard), probably the most famous chanteuse that country ever produced, in “La Vie en Rose.”

The voice of Edith Piaf (Marion Cotillard, "A Very Long Engagement," "A Good Year") was once described by Marlene Dietrich (Caroline Silhol, "Tous les matins du monde") as 'the soul of Paris,' but the diminutive chanteuse who rose from the gutter endured many tragedies, drug addictions and an early death from cancer. For a time, though, the little sparrow flew high and lived just like the lyrics of her song "La Vie en Rose." If actress Marion Cotillard does not become one of the few actresses nominated for the Best Actress Oscar for a performance in a foreign language film, there is no justice in the Academy. Hers is an all-encompassing depiction of Piaf, from the cheeky street hustler to the battered and broken husk at life's early end. If only cowriter (with Isabelle Sobelman)/director Olivier Dahan's ("La Vie Promise") film were as good as his lead actress. "La Vie en Rose" is at once traditional rags to riches and back again musical biopic and a movie that disregards the rules of storytelling yet fails to innovate a successful alternative. Dahan begins at a traditional spot, the beginning of the end, when Piaf collapses during a 1959 appearance in New York City. He then travels back to her humble beginnings as a motherless child born in Belleville and left with her brothel keeping Grandmother Louise (Catherine Allégret, "Last Tango in Paris") when her father, Louis Gassion (Jean-Paul Rouve, "A Very Long Engagement"), goes off to fight the war. She goes blind for a time, but recovers her sight under the devoted care of prostitutes Titine (Emmanuelle Seigner, "Frantic") and Anetta (Clotilde Courau, "Almost Peaceful"). Then she's cruelly ripped away from them, into the world of street entertainment with her father, where her unique voice comes into its own. Dahan continually flashes forward and back again among the three distinct phases of Piaf's life - the pre-fame misery, the glory years and the decline, but he utterly fails to present how the quiet, cherubic little girl embodied by Manon Chevallier ("Palais royal!") at five and Pauline Burlet at ten evolves into a coarse, hard-drinking gutter rat. Nor does he explain the sudden existence of her alcoholic mother or the constant companion, Mômone (Sylvie Testud, "Fear and Trembling"), who may be a friend or may be a half-sister - who knows? Piaf had many men in her life and Dahan focuses on a few. First there is Louis Leplée (Gérard Depardieu, "The Closet," "Paris, je t'aime"), the cabaret owner who recognized her talent on the street and gave her her name. When he is murdered, the criminal element Piaf has hung with point the blame her way, but again Dahan does not clarify, just as he leaves us wondering why she seems to have a pimp but is not a prostitute. Next up is Raymond Asso (Marc Barbé, "Regular Lovers"), the man who shapes her stage presence with tough love and introduces her to Marguerite Monnot (Marie-Armelle Deguy, "Bon voyage"), Piaf's long time composer. Asso is apparently rudely dropped when Piaf gains fame, a fact we can only deduce via one tossed off comment, yet he reappears at a comeback concert with much affection - ? Louis Barrier (Pascal Greggory, "Gabrielle," "The Page Turner") is the put upon manager who may or may not have been Piaf's lover, and her last, enabling husband appears out of nowhere. For a film of this length (140 minutes), where other points can be made repeatedly, these lapses are frustrating, especially given the film's half-committed approach to its 'impressionistic' portrait. Piaf's famous affair with married boxer Marcel Cerdan (Jean-Pierre Martins) is, however, given its due, seeing as how his death in a plane crash, a journey Piaf had begged him to make, was the singer's undoing. Corporal Michel Emer (Aubert Fenoy), a composer, and American artist Doug Davis (Harry Hadden-Paton) are fleeting representations of Piaf's many young proteges. As the film climaxes, it becomes increasingly fragmented, particularly in its depiction of Piaf in California, but Dahan once again makes a traditional choice by ending with a triumphant performance of one of the singer's most famous songs, 'Non je ne regrette rien.' (His more unusual choice of showing her first concert hall performance in silence works to highlight the difference Asso's training has made.) The 5'6" Cotillard, who lip syncs to Piaf recordings, has physically shrunk into herself to portray the 4'8" little sparrow, capturing the brittle frailty of the woman, yet also projecting her fire, the very combination that made Piaf such a wonder. Kudos to the hair and makeup team who transform her from a gawky scarecrow to the look which most resembles a Kabuki Judy Garland (Dahan, at one point, foreshadows this when Louis presents his daughter with a Kabuki doll), and then to the ravages which follow (at one point Edith declares her age as 44 and we gasp - the woman looks 70). "La Vie en Rose" is a must for Cotillard's soul shredding performance alone, but Dahan's experiment in mixing an artistic approach with a more conventional biopic style is frustrating.

I have to admit that I knew very little about Edith Piaf, her life or her music – with the exception of the artist’s signature, and most famous, tune, Non, je ne regrette rien – until I sat through Olivier Dahan’s 140 minute take on her life and times. The result, originally titled “La Mome,” is an over long, unevenly executed work that has some interesting moments – particularly a fine, very physical performance by Marian Cotillard as dame Edith – but is, in the end, a kitchen sink film that just keeps on throwing stuff at you. La Vie en Rose” begins with her 1959 New York City concert as Edith takes center stage to an adoring audience. During a song, she collapses on stage. The action flashes back to 1918 and Edith is a street urchin whose mother has ambitions to be a great singer. She abandons the four-year old who first lives with her maternal grandmother then, after her father returns, with his mother – in a Normandy brothel. From here, the film jumps back and for the in time, traveling forth to Edith’s last years as a morphine addict wasting away. At 47, she looked more like 80. If “La Vie en Rose” had done these time shifts in a linear manner – chronologically following her life in flashback, always returning to her “present” – it might have been a tighter, less muddled biopic. Instead, Dahan plays loosy-goosey with the time shifts to confusing effect as he jumps between 1959, 1918, 1927, 1935, 1947, 1955, 1963 and other years in Piaf’s life, though not in this order. The seemingly random flashes back and forth make for a fragmented film at best. The best things in “La Vie en Rose” are, as I mentioned, Cotillard’s performance as the mature Edith and the actress’s stage performances dubbed with the Piaf’s actual recordings. However, the confused transitions, fragmented story and the sudden introduction, near the end of the film, of an incident (I will leave it as a surprise if you deign to go see it) that, if revealed earlier, would have gone far to explain why Edith was Edith. There is little reason, to me, for any film to be much over 90 minutes (well, an epic could push the 2-hour mark). The subject of “La Vie…,’ Edith Piaf, may be of interest in France but to me, she is not nearly compelling enough (besides her terrific, heartfelt songs) to warrant nearly two and a half hours. Tighter editing and a more conventional bit of story structure would have made it better.