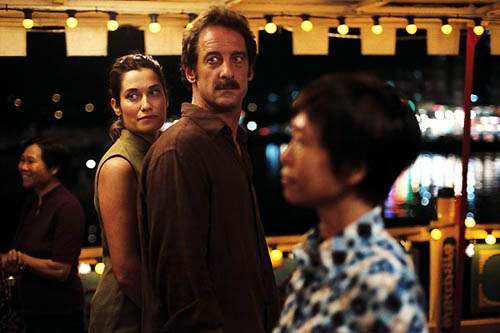 Preparing for an evening out, Marc Thiriez (Vincent Lindon, "Friday Night") asks his wife, Agnès (Emmanuelle Devos, "Kings and Queen"), what she thinks about his shaving off his moustache. 'I don't know you without it,' she replies, and when he decides to go through with the shave her words could just as easily be his as Marc loses himself into the depths of madness over the loss of "La Moustache."

Making his feature directorial debut, writer Emmanuel Carrère ("The Adversary") adapts his own novel (with Jérôme Beaujour, "Pas de scandale") with deliciously unsettling results. "La Moustache" is a movie about identity and marriage that raises many questions and supplies many answers without actually giving any. This is a well-acted, existential thriller with a twisty quick change ending that pulls the rug out from all that's come before. Marc is coy when Agnès returns, bending over a shoe ('my shoelace is broken'), hiding behind an extended towel as she gets out of the shower, playing peekaboo in front of a mirror. But when he finally shows his face, her only reaction is that although it is an appealing idea, they have no time for sex. Marc says nothing, not even when friends Serge (Mathieu Amalric, "Kings and Queen") and Nadia's (Macha Polikarpova, "Nathalie...") notice nothing either, even after his pointed remarks about Nadia's new hairstyle. He finally bursts on the car ride home, but to his astonishment Agnès acts like he's lost his mind, claiming he never had a moustache. When the same claim is made by coworkers, Marc begins to believe he may be losing his mind, but there is that nagging idea that the whole thing might be an elaborate joke Agnès has cooked up, an idea supported by her behavior in a funny story recounted the night before. Marc agrees to see a therapist and the marriage enters a weird neutral state, but when he hears Agnès discussing plans to have him committed, he bolts, travelling to Hong Kong where he spends his days riding ferries to and fro. Almost from the onset, Carrère casts a strange spell of foreboding, beginning with his effective use of Philip Glass's "Concerto pour violon et orchestre, 1987." When Marc shaves off his mustache, he washes away every trace of it, almost like he's obscuring evidence. Insult is added to injury when, arriving at their friends, Agnès asks her husband to comment on her appearance (a looks she dubs 'slutty' which she obviously delights in provoking their friends with). Marc begins to unravel remarkably quickly, rooting through trash for evidence of his facial hair, chain smoking after three years quit of the habit. The real quease-making begins when other aspects of Marc's life begin to disappear. Those pictures from Bali two years earlier where he may or may not have sported a 'stache are suddenly gone and his reference to them treated with suspicion. They have no friends named Serge and Nadia and his father has died several years earlier. 'Are you going to disappear, too?' Marc asks his wife. In his panic to find his parents' home, he breaks his shoelace and the making of truth from his former lie seems dire indeed. Lindon is an appealing performer and when he replaces his early playfulness (watch the 'what me?' look on his face, his mouth foaming toothpaste like a ghost of the titular subject, and try not to giggle) with paranoia, he's got us on his side. The actor must go through several other paces once he gains a sort of freedom only to find he's lost something else. The film's final shot on the actor's face is indeed a haunting one. And for every emotional pitch Lindon takes us through, Devos counters with ambiguity in a performance that allows her many motivations. The actress enthuses over her choice of a garish green jacket with the same easy offhandedness that she later dismisses it, yet makes the attitude feel different. Devos nails a tough role - the character she has to play reminded me of Bergman's direction in "Casablanca," where she did not know if Ilsa left with Rick or not until the scene was filmed, but Devos must keep herself off kilter. "La Moustache's" stunning resolution is every bit as haunting as its build, a reverse speculation perhaps more crazy-making when Marc grows his mustache back. If such a little thing wrecks such havoc upon memory, our identity is a very fragile thing.

Marc (Vincent Lindon) playfully wonders to his wife Agnes (Emmanuelle Devos) what he would look like without the moustache he has had his entire adult life. “I like your moustache,” she tells him as she heads out to run errands. On a whim, while she is out, he decides to shave his ‘stache and surprise her. But, when she returns, she doesn’t notice anything different in “La Moustache.” La Moustache” is a psychological drama that begins, in Marc’s mind, as a harmless prank aimed at Agnes. But, when he shaves off the title character and she doesn’t notice, he thinks that she is simply turning the tables on him and his joke. That’s OK until they join their friends, Bruno and Nadia (Hippolyte Girardot and Macha Polikarpova), for a dinner party and they don’t notice, either. At first, Marc is amused over being had by his wife and friends but when the missing moustache continues to go unnoticed to others, too, his amusement turns to anger. Marc confronts Agnes as they drive home and is shocked when she tells him, with apparent honesty, that he never had a moustache. He begins to search for proof of his long time lip fur, finding a packet of vacation photos that prove him correct. When he tries to show her the pics, they disappear and Agnes doesn’t know what he’s talking about. Is Marc the butt of an elaborate joke or is the man going mad? This is the meat of “La Moustache” but don’t expect the question to be answered by the end of this deftly weaved mystery. La Moustache” has a fairy tale quality where one man’s whimsical act has profound effect on his life. The subject face hair, when removed, radically alters his life and everything about it. This is a fine character study by Vincent Lindon as he moves from anger over his backfired joke to being on the verge of madness as the evidence builds that his former moustache may be a figment of his imagination and that he may well be mad. Lindon performs mostly through facial expressions that turn from amusement to bemusement to anger and confusion as he begins to doubt himself and his mind. This is Lindon’s film as Emmanuelle Devos gives a straightforward performance as a wife who, suddenly, faces a man she no longer knows. We are made privy to all aspects of Marc’s life, the people he meets and the conversations, on the phones and in person, which he has. But, we see Agnes mostly through his eyes only and Devos plays her as the concerned wife as she presses Marc to get help, all the while thinking that he has gone mad. La Moustache” is a solid psychological drama that leaves you with more questions than it even tries to answer. It is a gorgeously shot film (by cinematographer Patrick Blossier) that moves from Paris to Hong Kong and captures both cities expertly. Philip Glass, whose music I usually find pretentious, creates a score that is perfectly balanced with filmmaker Emmanuel Carrere’s first feature effort. The Hitchcock-style story, by Carrere and Jerome Beaujour (from Carrere’s novel), is intriguing from start to finish, despite the lack of answers to the many questions it raises. And, that ain’t shabby.