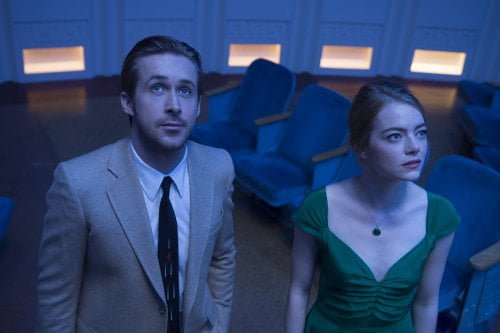 Mia (Emma Stone) works as a Barista on the Warner Brothers lot as she strives to land the interrupt-free audition that will get her noticed. Sebastian (Ryan Gosling) is a struggling musician who hopes to revive traditional jazz in his own club. The two keep crossing paths at their worst moments, but when they finally talk about their dreams, sparks fly in "La La Land."

Writer/director Damien Chazelle broke big in 2014 with "Whiplash," but back in 2009 he made a little Indie in Boston, a musical called "Guy and Madeline on a Park Bench" about a musician and grad student whose connection is real, but who drift apart. As it turns out, it was an auspicious dry run for "La La Land," a musical so in love with love - and the movies - that only a stone cold heart will fail to get swept up in its glorious romance. Shooting in 35mm Cinemascope (2.55:1), cinematographer Linus Sandgren's ("Joy") camera first rests on the crammed Century City overpass leading into L.A. during a morning commute. A woman gets out of her car and begins to sing. Others join her, dancing through and leaping onto cars, accompanied by the band playing in a box truck as the camera swirls through the action in one unbroken take. It's a dazzling opener brought back to earth when an annoyed Sebastian honks at the preoccupied Mia to get moving. It's Mia we follow as she dashes to one audition after another, her fine work ignored by multi-tasking casting directors. Leaving a party one night, Mia realizes her car has been towed and begins to walk, music from a restaurant drawing her in. She's mesmerized by the pianist's passion, but when she tries to tell him so, he rudely brushes past her. Chazelle resets, picking up with Sebastian heading to work where restaurant owner Bill (J.K. Simmons, "Whiplash") gives him one last chance to stick to Christmas standards. That piece he was playing when Mia walked in (original music by "Whiplash's" Justin Hurwitz), which returns throughout as the couple's theme, had just gotten him fired. The movie begins in Winter. Spring brings change and Summer finds the romance in full bloom. But just as Mia's begun to write her own play at Sebastian's urging and he's taken a full time position in Keith's (John Legend) modern jazz pop band The Messengers, Autumn arrives and the relationship strains. Five years later, we're back in Winter in L.A. and Chazelle delivers one of the most moving romantic finales to ever grace a movie screen. This is Stone and Gosling's third romantic pairing (after "Crazy. Stupid. Love" and "Gangster Squad") and while both are pitch perfect, this is Stone's movie. She's the Hollywood hopeful and the actress projects all the pain of constant rejection while shifting through a battery of characters from tough inspirational teachers to jargon-spouting medics. Stone shines, her dancing is exquisitely fluid and while her voice may not be the strongest, its full of emotion, never more so than in her literal 'Audition' piece. Gosling's character is more cantankerous, a jazz devotee who chafes against the infidels. He sings and dances as well, but its his piano playing that impresses most (Chazelle's three for three with lead actors doubling as musicians). The production is a marvel, harkening back to the bright, primary color schemes of Jacques Demy and the lush sweep of Minelli. Chazelle's love letter to L.A. features a constant stream of movie 'back drops' from an orange grove billboard, to classic movie locations ("Rebel Without a Cause's" Griffith Observatory), to the literal one used in a match cut. Chazelle's elegant script repeats motifs, that opening traffic jam revisited in his final scene, the Rialto theater repurposed after it closes, the fabricated Paris of Mia's one woman play prophetic. Camera work is fluid, even heady, like the swish pans used in a jazz club or the spinning point of view from the middle of a swimming pool, right out of a Esther Williams film. Peachy lavender sunsets and lilac nights have never looked more beautiful. Costume designer Mary Zophres ("Hail, Caesar!") attires Stone in high necked vintage styles, Gosling in jazz inspired retro, Mia and her roommates in popping yellow, red, green and blue for the early party scene. Hurwitz's compositions, like 'City of Stars' linger. Choreographer Mandy Moore ('Glee,' 'So You Think You Can Dance') floats her stars on wires for a dance across the cosmos. This is a film about story telling, about following dreams, about the cradling support of real love and the personal paths which separate us. There are a myriad of moments to cherish here. "La La Land" is that rare thing - an instant classic. Grade:

I have seen the three feature films by Damien Chazzelle, beginning with his Academy Award winner, “Whiplash (2014),” then his debut feature, “Guy and Madeline on a Park Bench (2009),” and, now, “La La Land.” What struck me most in seeing his films is how the director/writer has evolved remarkably from one project to the next. There is the spark of potential genius in his first but that spark has turned into a real fire with both “Whiplash” and “La La Land.” “La La Land” is, by far, the young filmmaker’s best and biggest work to date with its lavish musical numbers, many being throwbacks to the musicals of the 1930s and 50s. The film’s opening, on an LA freeway, turns a traffic jam into camera-swooping dance as all of the drivers and passengers exit their vehicles and break out in song and dance, setting the tempo for this wall to wall musical. Ryan Gosling and Emma Stone, while not singers and hoofers, do a fine job in getting you to empathize with the ambitious young couple trying to make a life in the titular town. While neither will likely be invited to sing at the Met, both give their all with their everyman characters trying to get a break in the entertainment biz – she as a star actress, he as jazz nightclub owner. Techs are first rate from choreography to production design that creates the perceived fantasy of what LA represents to the young and eager. This has already had huge awards buzz with its feel good story and sympathetic personae, and great look. Expect more.