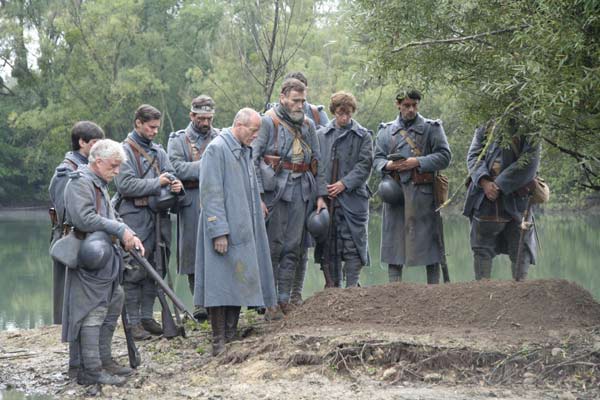 Camille Robin (Sylvie Testude) is just recently married when her husband, Francoise (Guillaume Depardieu), marches off to fight the Boche in World War I. After many months away, she receives a terse letter from Francoise telling Camille “you’ll never see me again.” Undaunted, the young newlywed cuts her hair, dons men’s clothes and sets off for the front to find her husband in “La France.”

Director Serge Bozon, with a script co-written with Axelle Ropert, tells a story that is reminiscent of two other French WWI movies of recent vintage, “A Very Long Engagement” and “Joyeux Noel.” The former was also about a young wife (Audrey Tautou) search for her husband across a war torn land. The latter, like “La France,” uses songs to bridge the action. However, these are the only similarities. “La France” is much simpler than its predecessors and less complex in story. As Camille heads to the front in search of Francoise, she meets a troupe of 11 French soldiers heading back to the war. Having cut her hair and changed into men’s clothes, she convinces the soldiers that she is a young man who wants to fight the Germans. The Lieutenant (Pascal Greggory) and his men resist the request, at first, but when the all fall ill, Camille nurses them back to health. They relent and allow the teenager to join them, providing a makeshift uniform to disguise “him.” There are four songs, used as chapter bridges, interspersed through the film. They all begin with “I, the blind girl…” then each goes its separate way as musical instruments magically appear in the hands of the soldiers. It is a whimsical device that helps move the well-trod story about a woman searching for her missing husband while war rages around them. The players, Sylvie Testude’s Camille plus the eleven French soldiers, are not given much chance to develop their characters beyond two-dimensional. There is a problem, too, with the film’s finale. You can guess how it ends and, when proved right, the result fails to satisfy. I would rather have Camille stay with the soldiers. The music keeps “La France” from being merely average.