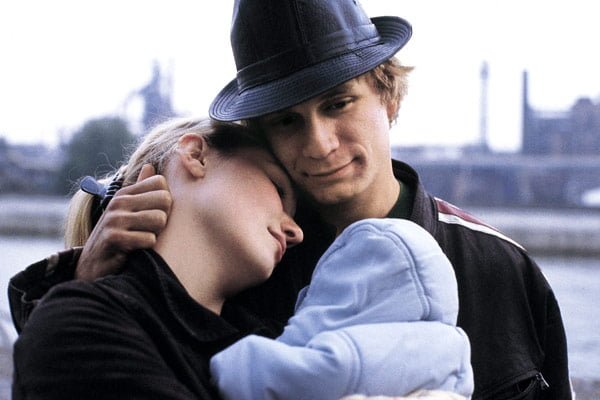 Bruno (Jérémie Renier, "Brotherhood of the Wolf," "Work Hard, Play Hard") is a petty thief who lives hand to mouth and makes a Euro just about any way that presents itself, but the rich deal he makes for himself and girlfriend Sonia (Déborah François) crosses a line so far he may never make it back in the 2006 Cannes Palmes d'Or winner, "L'Enfant."

Belgian writing/directing brothers Jean-Pierre and Luc Dardenne ("La Promesse," "Rosetta") have made a specialty of shaky hand held observation of people living on the edge of humanity. Their first Cannes winner, "Rosetta," followed a young girl who would do anything to hold down a job, even betray the only one who helped her. Like Rosetta, Bruno is fighting for survival on the streets, but his life is marked by impulsiveness. Where Rosetta might find security in a cache of a few hundred Euros, Bruno is more likely to impoverish himself for the lure of a leather jacket. The Dardennes introduce their audience first to Sonia, but in so doing we learn everything we need to know about Bruno. The extremely girlish looking Sonia hitches a ride on the back of a scooter, a baby cradled in her arms. She returns to her flat only to discover that Bruno has sublet it. She calls around looking for him and visits a riverbank site where he stashes his clothes. She finally finds him, panhandling on a busy street. Bruno is happy to see her, in a way that resembles a puppy with short attention span disorder. Incredibly, Sonia does not rebuke him for giving away her home or spending the remains of her cash on a leather hat and jacket nor for not visiting her when she gave birth to their son who he is now meeting for the first time. Who is the titular child here? Bruno secures them beds in a shelter, but he's no sooner bedded down when his cell phone rings, another deal in the making. He slips into the night, trades his hot goods for a serious sum, then turns that into a one day rental of a convertible that's caught his eye. He fits the rear seat with a baby carrier. But later, when Sonia is determined to wait in a social services line, Bruno takes off with baby Jimmy in his carriage and a suggestion from the night before lodges in his consciousness. Bruno makes a deal to sell his baby. The charismatic Jérémie Renier has made it clear that Bruno's not the type to brood over any of his actions, but this is clearly different and the Dardennes mark the significance with the use of Bruno's defining leather jacket, used first as the swaddling as he leaves his son on the floor of an assigned meeting place, then as the carrier of the cash he finds left in Jimmy's place. From this moment on, everything turns bad for Bruno. Sonia's reaction is so physical it lands her in the hospital where her ravings about her lost baby attract the attentions of the police. Bruno desperately and immediately engineers the return of his son, but the baby traders demand double payment. Bruno tries to score some fast cash with is preteen accomplice, Steve (Jérémie Segard), but the job goes horribly wrong and yet it presents an opportunity for redemption, ironically in the form of a dependent young boy. Newcomer Déborah François makes Sonia's fury a thing of magnificence. She's dynamic to watch, clearly emotionally adolescent and yet downright feral when it comes to her child. Jérémie Segard shows this same type of dualism in reverse. Steve is obviously tough in the way of the streets albeit weakened by his deference to Bruno, Bruno's seniority obscuring any judgement of his character. But faced with a situation outside of his urban experience, Segard shows Steve as just a young child. The Dardennes make watching Bruno compelling throughout, and yet when their film is over things stand a little too simplistically. Bruno makes a mistake he cannot fix with his shaggy dog charm and at the next opportunity redeems himself by doing the right thing. Still, "L'Enfant" intrigues with its small observations of what makes people tick.. When he's still too dim to realize that Jimmy is his ancestral imprint, Bruno bides his time by running up a wall in mud-caked sneakers. He's so obviously pleased with the marks he's left, that the carriage nearby is all but an afterthought.