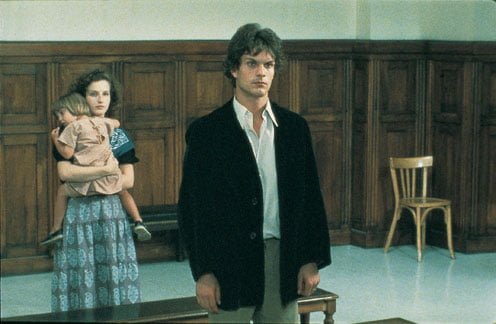 Well a well off young Parisian cannot talk his parents into giving him more spending cash than they already have, he passes a counterfeit 500 franc note in a photographer's shop to get it. This frivolous act by an upper middle class teenager will reverberate, causing untold tragedy to the oil delivery man, Yvon Targe (Christian Patey), who's left holding bad "L'Argent."

This was the great French writer/director Robert Bresson's last film, adapted from Leo Tolstoy's short story "Faux Billet" yet reconfirming Bresson's themes. If one is only familiar with Bresson's films from the 50's and 60's, seeing his expressionless acting style shot in color can be a bit jarring - in fact, a few of the characters here, particularly the female clerk in the photographer's shop - come off as automatons, but Patey is affecting in the central role and his tale is compelling. Norbert and his counterfeiter friend Matrial buy an inexpensive picture frame in order to get change in real French francs (these opening scenes are less than convincing, the boys' behavior clearly suspicious). When the shop owner discovers the bad note, he's furious, but decides to pass it on - the unlucky recipient is Yvon, who is turned in when he tries to pay for his lunch with it. He has the police escort him back to the shop where he knows the note came from but shop assistant Lucien (Vincent Risterucci) has been coerced into denying recognizing him. Yvon loses his job over the incident and gets involved as the driver on a bank robbery in order to support his wife (Caroline Lang) and young daughter. He's caught and sentenced to three years. During that time he receives first a letter informing him that his daughter has died of diphtheria then later that his wife has met someone else. When Yvon emerges from prison, he is a very different man and his subsequent choices are shocking. In a somewhat offhand subplot, the shop keepers get their just rewards after firing Lucien, but apparently Norbert and Matrial get off scot free. And so we see Bresson's themes of sin, albeit without the overt Catholicism of his earlier works, and of economic social injustice. We even have the innocent and loyal animal observing human depravity in the Alsatian owned by the woman who gives Yvon shelter. The director continues his device of focusing on peoples' hands and feet as they conduct business and daily chores. The film has an almost metronomic beat built into its pacing which, along with the odd ATM machinery (they look like automated bread boxes) of the time, evoke a bit of Tati, a director who couldn't be tonally more different. And yet within this same film, we can see Bresson's influence on Polish director Krzysztof Kieslowski, Yvon's curtly procedural trial and subsequent acts a precursor to "A Short Film About Killing." "L'Argent" is a fascinating account of cause and effect and how the wealthy can walk away from crimes for which hard working innocents can pay.