Kurt Cobain About a Son 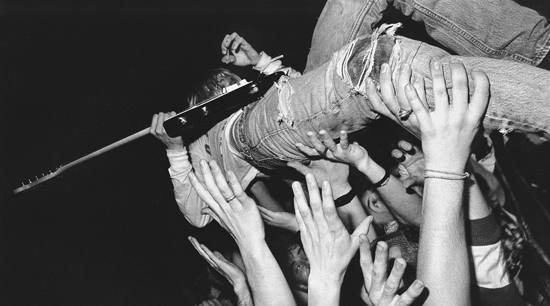 Documentary filmmaker Al Schnack delves into the life of grunge rock legend Kurt Cobain in a unique biography that is anything but conventional. Gleaning from over 25 hours of Cobain’s audiotape interviews with music journo Michael Azerrad, Schnack takes us through the life of the young singer/songwriter/musician whose life was tragically snuffed out far too soon. The result is the visually striking and compelling docu, “Kurt Cobain About a Son.”

Director A.J. Schnack, whose They Might Be Giants documentary "Gigantic: A Tale of Two Johns" was a refreshing departure from the standard musical biopic, proves a knack for unique approaches once again with this visual diary he has set to audio interviews of Kurt Cobain. In what would seem a hugely contrary approach, Schnack uses no Nirvana music, nor does he reveal an image of his subject until the film's closing credits. Instead, he organizes Cobain's words into a linear autobiography and sets them to vivid images of Cobain's environments - the lumber yard where he spent countless hours as his father worked, school, the bridge underpass he once called home, the more opulent grounds of his Seattle manse. What emerges is a portrait of a man who has carefully considered the impact of adult action on children both good and bad, one whose physical pain led him towards drugs and one who was determined to create art without being pigeon-holed. Cobain sometimes contradicts himself, humanity's complexity's in evidence. Schnack intercuts his beautiful 35mm images with arty cutaways of dolls, food, buttons and artful overlays, such as a swimmer over a classroom, evoking Nirvana's Nevermind album cover. Later some artful editing puts the anatomical In Utero into context with Cobain's physical ailments. Some other choices, such as montages of random faces, are jarring in context, more in keeping with advertising than Cobain's life story. Overall, though, Schnack's instincts serve strong material well. "Kurt Cobain About a Son" is essential viewing for any real fan of the man and his music and an artfully unique take on the musical biographical documentary genre. At times its downright mesmerizing.

Schnack, with cinematographer Wyatt Troll, compiles a rich collection of expressionist video of the three cities where Kurt Cobain became, well, Kurt Cobain. The film begins with its images of Aberdeen, Washington where he is born to a nurturing mother and an uncaring lumberyard worker father. (The images of the lumber industry play prominent through the first third of the film.) The interviews follow the loose chronology of Cobain’s life: his childhood, his need and desire to fit in during his adolescence, the aimlessness of his teens. As the beautiful photographic imagery moves to Olympia, then Seattle, Kurt’s story progresses through his interest in music and its influences on him, from David Bowie to Iggy Pop to Scratch Acid. Their music (and that of other rock and R&B stars such as Arlo Guthrie, Queen, Cheap Trick, Leadbelly, Bruce Springsteen and Creedance Clearwater Revival) accompanies music vid-style montages and stills that blend quite nicely with the familiar tunes. The interviews with Cobain are also given the music video treatment, with archival footage and shots from the time when he was being influenced by, and influencing, the music – plus the day-to-day images of life in the two cities. Al Schnack does justice in telling us about Kurt Cobain’s life through the musician's own words. Cobain talks about the difficulties of growing up in a divorced home where his problematic nature was tamed with Ritalin and sedatives; the music that influenced him; his passion to play his music and the cost to it that fame paid; his marriage to Courtney Love and its tribulations; the birth of his daughter; and, his constant bout with stomach pain and his fall into addiction to morphine and heroin. Kurt Cobain never lived to see his 28th year on earth. His life ended in an apparent suicide – a gunshot wound to the head – so, as with Hendrix, Joplin and Morrison, we will never know if Cobain had reached his full potential or was destined for greater things in his music. “About a Son” is a tightly woven documentary with a terrific, interesting subject that is handled deftly by the filmmakers. The unique style of the film makes it a music and art house fan’s must and, if you are a fan of Kurt Cobain, yours too.