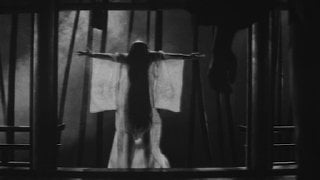 Japan is in the midst of a civil war and roving gangs of ronin are pillaging the countryside. Two woman, a mother and daughter living alone while their son/husband fights in battle, are made victims by one such band of outlaw samurai who repeatedly rape them both, kill them and burn their house to the ground. Flash forward and lone samurai are found murdered with their throats torn out and the governor sends his best warrior to investigate the mystery in “Kuroneko.

In a secluded clearing of a forest, over a dozen Samurai appear out of the bushes. They enter a home where an older and younger woman are eating rice. The Samurai begin to help themselves, not only to the food, but to the women, and slip away leaving two corpses in a burning cottage. From that time on, Samurai begin to disappear and rumors of a ghost at Rajomon Gate may be the cause. The Samurai Hachi, whom his lord Raiko (Kei Satô, "Onibaba") has named Gintoki of the Grove (Kichiemon Nakamura, "47 Samurai"), is sent to vanquish them, but he discovers, to his horror, that the women are his mother, Yone (Nobuko Otowa, the mother in "Onibaba"), and his wife. Shige (Kiwako Taichi), still living with their "Kuroneko (Black Cat)." Writer/director Kaneto Shindô followed up his superb ghost story, "Onibaba," with another tale of a mother and her daughter-in-law, this time as the victims. Cinematographer Kiyomi Kuroda's silvery atmospheric camerawork in "Onibaba" has taken a turn for the theatrical here, with deep shadows and dramatic lighting that serve this story as beautifully as his more naturalistic work in the prior film. Shindô's two moody ghost stories from the mid to late 60's aren't the least bit dated. Both are period pieces featuring a daughter-in-law in jeopardy, Samurai of the less than heroic sort, and revenge. "Kuroneko" is a film in two main parts. The first part catalogs Yone and Shige's revenge on the Samurais. The beautiful and ethereal Shige stands at the Gate at an unseemly hour and passing Samurai offer to escort her home. Once there, they are offered rest and the strange Kabuki-like mother brings refreshment. All sense something is not right (is that the Saki or did a cat's paw just pour more?) but not in time to fend off Shige's vampiric attacks. Dawn finds their corpses lying in the ruins of the burned down house, just as the black cat found Yone and Shige. The second part involves Hachi's mission to kill the ghosts and the horrible realization he makes. Yone and Shige have made a pact with the devil to kill Samurai, but while Yone sadly faces her fate, Shige is too overjoyed to see her husband again and makes a terrible deal. "Kuroneko" astonishes with its stunning black and white images and effects. The film even features wire work in a bamboo forest, shades of "Crouching Tiger, Hidden Dragon." Shige's first ghostly appearance is simply beautiful, a phantasmorgic somersault through the air.

This 1968 ghost story, by Japanese writer/director Kaneto Shindo, is a spooky yarn of revenge and murder. After the prologue, the brutal rapes and deaths of the isolated Yone (Nobuko Otawa) and Shige (Kiwako Taichi), time jumps ahead and a solitary samurai rides his horse in the dark, dozing in the night. The black cat of the title watches the warrior as he enters a deserted town. Suddenly, out of the darkness, a mysterious woman appears. She asks him to escort her home across a night-shrouded grove. Once there, she invites him inside where he meets the young woman’s mother. The ladies show their thanks to the samurai, who finds them familiar, with dinner and sake, lots of sake, getting the man very drunk. He seduces Shige and, in the throws of his passion, she attacks the samurai and rips his throat out. This is the first we see of what becomes a long string of dead samurai warriors, all killed in the same vicious way. Reports of these deaths come to the attention of the governor of the province and he orders his bravest samurai, Intake (Ichneumon Nakamura), to the scene of the crimes. The governor believes that the warrior-killers are ghosts and wants it proven or not by his loyal vassal. The brilliant use of black and white film gives “Kuroneko” a high contrast look with little grey shading present. This is a classic-looking film that evolves from a ghost story about revenge to a story of familial love. It is both spooky and thoughtful, not an easy combination to pull off.