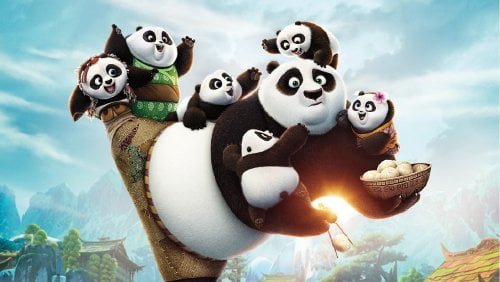 Master Oogway (Randal Duk Kim) is challenged by his former disciple, the centuries-banished General Kai (J.K. Simmons), and they do epic battle. The kind and wise tortoise is bested by the renegade Kai, opening a window for him to return to earth from the spirit world. The general begins his evil plans to collect the power, the chi, of all kung fu masters across China and enslave the country. It is up to Po (Jack Black), Shifu (Dustin Hoffman) and the Furious Five, and someone special to the pudgy panda, to stop Kai and bring peace back to the land in “Kung Fu Panda 3.”

Loveable Po (voice of Jack Black), the unlikely Dragon Warrior is back to face another challenge, defeat more enemies and find another family in the balance. When red panda Master Shifu (voice of Dustin Hoffman) says that Po will replace him to train the Furious Five - Tigress (voice of Angelina Jolie), Monkey (voice of Jackie Chan), Mantis (voice of Seth Rogen), Viper (voice of Lucy Liu) and Crane (voice of David Cross) - he loses some of his hard won confidence and his first day on the job proves disastrous. But Shifu knows Po must continue to grow, and not just in dumpling-aided girth. Two things occur which will force Po to face his new challenge. Kai (voice of J.K. Simmons), the yak who once fought alongside Shifu's Master, the ancient turtle Oogway (voice of Randall Duk Kim), has been simmering in the Spirit Realm ever since being banished there by his former friend. The duo had discovered the power of chi, the energy of life, but where Oogway sought to use it for good, Kai was corrupted by it. He's been stealing the chi of kung fu masters to return and defeat them all. Meanwhile, Po returns to his adoptive dad Mr. Ping's (James Hong) noodle shop and is horrified to find his dumpling eating record about to be broken - by another panda. Li (voice of Bryan Cranston) tells Po he is looking for his son. Po tells Li he's long been looking for his dad. Ping, who's just gotten over losing his son to kung fu, is not happy. But Li's return is seemingly written in the stars as he takes Po to the secret Panda Village of his childhood, a place where Po realizes something important and finds his inner teacher training his kind to fight the evil Kai. (He'll also meet his first female panda, the assertive ribbon dancer Mei Mei (voice of Kate Hudson)). "Kung Fu Panda 3" continues the fun while completing a circle, but it fails to reach the trilogy's artistic pinnacle, "Kung Fu Panda 2." The third film, written by the series' Jonathan Aibel & Glenn Berger and directed by the 2nd's Jennifer Yuh with Alessandro Carloni (stepping up from the animation department as Yuh did), focuses more on roly-poly pandas than peacock feathers and shadow puppetry, Kai's impressively translucent jade zombies this one's most startling effect. Grade:

Anyone familiar with the lucrative “Kung Fu Panda” franchise knows Po and his friends’ story. As such, the filmmakers get right to the task of telling the next episode in Po’s life. This time around, Po’s dumpling eating record is in danger of being broken. Everyone gathers around to witness the shattering event, the winner of which is a larger, fatter version of Po. Though everyone else sees the resemblance, it takes Po and the mysterious stranger a while to come to the realization: he is Po’s long-lost father Li (Bryan Cranston). The joyful reunion is interrupted, though, when alarms ring throughout the valley, warning of the approach of the minions of General Kai. I will leave it at that as the amusing story unfolds and Po and his comrades do battle against evil. This brings us back to Li, who wants to bring his son to the secret village of pandas and teach him how to act like a panda – learn to sleep, roll down a hill, sigh and use a hot tub. In return, Po trains his extended new family in the art of kung fu and recruits them all to fight Kai and the martial arts masters he enslaved. “Kung Fu Panda 3” fits and wears like an old and comfortable pair of shoes. This, I think, is mainly due to the screenwriting duo of Jonathan Aibel and Glenn Berger who have been with the franchise from the start. As well is director Jennifer Yuh, who helmed “KFP2” and co-directs the latest installment with Allesandro Carloni. This continuity of talents – including the vocal cast, all of whom return from “KFP” and “KFP2,” plus some new voice talents – makes for a familiarity that definitely does not breed contempt. Unlike the “Shrek” franchise, which to me diminished with each subsequent sequel, “Kung Fu Panda 3” maintains the energy and humor of the original and leaves the viewer, especially the kids, with positive attitudes, mainly because of our plump Dragon Warrior, Po. Jack Black maintains the charm and cuddly good nature of his now-iconic character, as do all of the vocal talents, including Bryan Cranston as Po’s dad. Those who love the exploits of Po and his super comrades will not be disappointed. “Kung Fu Panda 3” continues the Po saga, setting up for the next installment, of course, but in a way that makes you want more.