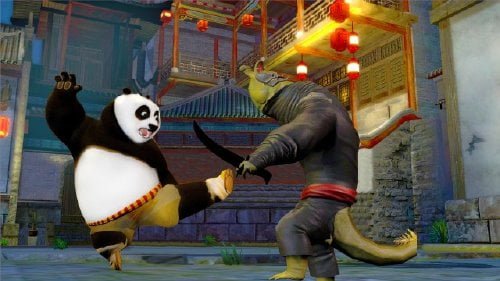 When we last saw pudgy, dumpling-eating Po (Jack Black), he had been anointed the Dragon Warrior and teamed up with the Furious Five to project the Valley of Peace. But, there is danger on the horizon in the form of an evil peacock named Lord Shen (Gary Oldman). Shen wants to conquer all of China with his wolf army and Po must find the strength, with the help of his five friends, to face his greatest challenge in “Kung Fu Panda 2.”

After attaining his unlikely dream of becoming The Dragon Warrior, Po's (voice of Jack Black) newest lesson from Master Shifu (voice of Dustin Hoffman) is to find his inner peace. Soon after, the Valley of Peace is attacked by the wolf henchmen of Lord Shen (voice of Gary Oldman), looking for metal to fuel the weapon that will end Kung Fu. But Shen's men also bear a symbol which sends Po spinning back to fragmented memories of his childhood and so his inner peace will depend on his own self-discovery in "Kung Fu Panda 2." Here's a rarity - the sequel that surpasses the original. "Kung Fu Panda" had its charms, but with new director Jennifer Yuh (moving up from the story, art and animation departments), and a script by the original's team of Jonathan Aibel & Glenn Berger, this story is more artistically inventive, less reliant on slapstick. There's still plenty of humor, but it is also mixed with poignancy and a neat parallel which finds both hero and villain dealing with long ago parental issues. Opening minutes give us a shadow puppet play, albeit in color (and 3D), which tell Shen's story of banishment by his sorrowful parents after he sees the destructive potential in their celebratory fireworks. During the wolf attack, Po remembers, in traditional looking hand drawn animation vs. the framework's computer generated imagery, his real parents and finally realizes he was adopted and that Shen had something to do with this. When he confronts the goose he's been calling dad, noodle shop owner Mr. Ping (voice of James Hong) narrates an adorable account of how the voracious panda cub arrived in a radish basket (the first Biblical reference in Po's past). In figuring out what he must do, Po wonders just 'How can Kung Fu stop something that stops Kung Fu?' but he and the Furious Five - Tigress (voice of Angelina Jolie), Mantis (voice of Seth Rogen), Monkey (voice of Jackie Chan), Crane (voice David Cross) and Viper (voice of Lucy Liu) - set sail for Shen's Gongmen City. Meanwhile Shen, disarmed by his Soothsayer's (voice of Michelle Yeoh) prophecy that paints Po as his destruction, has armed his city with fearsome cannons. While the 3D is not essential to enjoying "Fu 2," the filmmakers have really made this sequel stunning to look at. Shen is an unusual peacock - black and white with hints of red, a color partner with the panda - and the feathers are so beautifully rendered, that Shen's tail cascading down the stairs is breathtaking. The film's climatic battle is so grand, it appears to have been inspired by the epic Asian period film "Red Cliff." There is also humor worked into the visuals, such as an overhead shot of Po and companions taking out wolves from within a Chinese Dragon costume like a Pac-Man game. When Po talks to his dad, Ping chops vegetables, which the 3D make 'dance' in the lower frame. Shadow is used not only for puppetry, but to suggest evil, such as when a cannon carved with a crocodile head appears to 'eat' a baby bunny. Sound and music are also integral. When the wolves attack, Po breaks the fourth wall, yelling 'Tell those musicians to start playing action music!' Their instruments are then incorporated into the resulting fight scene, all timed to the film's score (original music by John Powell & Hans Zimmer). A great climatic gag exposes an oft-used yet illogical film device which often uses sight, but here employs sound. The original voice cast return and are joined by Gary Oldman with Danny McBride as his Wolf Boss and Jean-Claude Van Damme, Dennis Haysbert and Victor Garber as Kung Fu Masters. The celebrity voices are still an embarrassment of riches, but there is no denying that Jack Black is perfectly cast as the roly-poly panda and Dustin Hoffman and James Hong are wonderful father figures. The film's finale may even bring a tear to the eye as one laughs at Mr. Ping's cheesy marketing ploys, but the oddly tossed on epilogue just screams sequel. Still, "Kung Fu Panda 2" is evidently a labor of love.

I was less than thrilled as I watched “Kung Fu Panda 2” unfolds with a cookie cutter story of a reluctant hero called upon to face down a dangerous and deadly opponent and save his country. He is joined by other superhero types and they combine their forces and defeat evil. That is pretty much what “Panda 2” is all about and I have been there before. Thus, I was less than thrilled. The good news is: “Kung Fu Panda 2” looks great! The CGI is brilliantly conceived and is the main reason to see the movie. Of course, the target audience is, foremost, the many fans of the original and that mostly young demographic will likely love “Panda 2.” The characters are mostly well-known, with some new faces/voices added. Joining Po and the Furious Five – Tigress (Angelina Jolie), Monkey (Jackie Chan), Mantis (Seth Rogen), Viper (Lucy Liu) and Crane (David Cross) – are Michelle Yeoh (The Soothsayer), Dennis Haysbert (Master Storming Ox), Danny McBride (Wolf Boss) and Jean-Claude Van Damme (Master Croc). This makes for a huge cast and each has to get some sort of story line and this waters down the 91-minute adventure yarn. The story follows the clichéd thread and intersperses the many set fight scenes and comic pratfalls at a regular rapid rate. This makes “Kung Fu Panda 2” familiar and it relies on this familiarity to use slick visuals and one-liners in place of intelligent writing. Familiarity does bread contempt, for me, and I think “Panda 2” dumbs down too much. I think that the filmmakers cheaped out and gave us a great looking, technically deft animation with lots of action but little story substance.