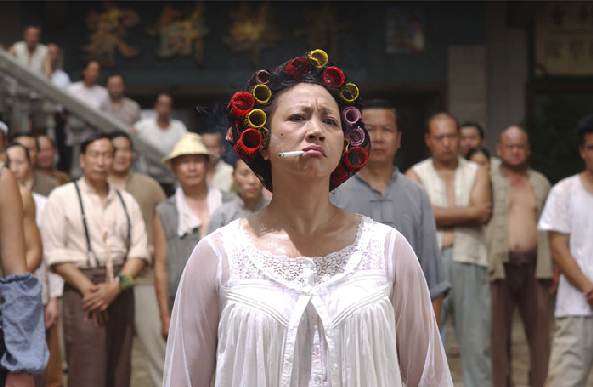 Members of the 1940s Hong Kong tong, the Crocodile Gang, try to strong arm a group of shop owners, threatening the honest citizens with violence if they don’t pay extortion, but their plan is thwarted when a flare is shot into the sky and explodes. Suddenly, phalanxes of the black-clad Axe Gang arrive on the scene and the would-be interlopers are dispatched in a fury of stylish, choreographed violence. This begins the action-packed, CGI-laden comedy spectacle that is director Stephen Chow’s “Kung Fu Hustle.” Robin: The story for “Kung Fu Hustle” is a complex weaving of characters, action and comedy that combines genres and styles to keep the eye moving and the mind racing. The Pennies from Heaven” opening sequence has the head of the Axe Gang, Brother Sum (Kwok Kuen Chan), lead his men in a dance that is reminiscent of old Hollywood musicals and Michael Jackson music videos like “Beat It” and “Thriller” as they dispatch the clueless intruders with gusto. Things shift to a pair of ne’er-do-wells, Sing (Stephen Chow) and his chubby sidekick (Chi Chung Lam), who saunter into an apartment block under the control of the Landlord (Wah Yuen), or, should I say, his mean-tempered, chain-smoking wife, Landlady (Qui Yuen). The two conmen declare themselves members of the Axe Gang and proceed to try to extort money from a fey hairdresser. The Landlady intervenes and the pair of hustlers is hustled out but not before they come to the attention of the real Axe Gang. Sing grovels to be made a member because being a bad guy is cool. There is a heck of a lot more going on in “Kung Fu Hustle” that spans movie genres from hard-boiled 1930’s and 40’s American gangster flicks to Westerns to Akira Kurasawa films (Sing and his sidekick reflect that master’s signature comic-relief buffoons). Of course, first and foremost in Chow’s panoply of film homage is his absolute devotion to Hong Kong Kung Fu flicks. And, as one might guess from the film’s title, there is a whole bunch of martial arts whoop ass from beginning to end in “Kung Fu Hustle.” It’s in the copious Kung Fu that Stephen Chow excels in his comic book style action comedy. He embraces the audacious fight scenes with the same fervor that Quentin Tarantino displayed with the Bride (Uma Thurman) in her one-woman stand against the formidable yakuza gang, the Crazy 88, in “Kill Bill: Vol.1.” Unlike the typical one against many Kung Fu fights usually shown in films – where the gang of bad guys obligingly go after the hero one man at a time – Chow has his several good guys take on the baddies en masse and kick butt. Couple this action with a load of tricky wire work, outrageous CGI that seems straight from a “Roadrunner” cartoon and fight choreography gleaned from “Crouching Tiger, Hidden Dragon” and Zhang Yimou’s “Hero” and we get a crowd-pleaser of a movie. The cast is populated with some of the most colorful characters that have graced an action flick. Stephen Chow is amusingly inept as conman Sing but turns into a powerhouse dynamo when he becomes The One (homage to Jet Li?). The other superheroes get full shrift, especially the Landlady and the Landlord as they take on the Axe Gang and their hired “gun,” the Beast (Siu Lung Leung), the World’s Best Killer. The other good guy heroes - the Coolie (Xing Yu), baker Donut (Dong Zhi Hua), and the effeminate-acting but deadly Tailor (Chiu Chi Ling) – are larger than life when their real selves come to the fore as they battle a pair of supernatural musician hit men. The story, by Chow, Tsang Kan Cheong, Xin Huo and Chan Man Keung, is an amusing hodge podge of action, beautifully choreographed fights and slapstick comedy that seems all over the place but, with manic editing by Angie Lam and dead on cinematography by Hang-Sang Poon, it works surprisingly well. Sets by Oliver Wong and costume design by Shirley Chan help complete the production package. Score by Raymond Wong frequently sounds like something straight out of the old “Peter Gun” TV series (which was memorably composed by Henry Mancini). Multi-hyphenate filmmaker Stephen Chow puts heart and soul into a production that will easily appeal to the Kung Fu genre fans. But there is so much slapstick humor, so many comic book like characters and outrageous special effects that “Kung Fu Hustle” should easily cross demographics. The only real false not is the side story between Sing and a deaf mute girl that pulls you away from the action and comedy. Not too shabby, I say, and give it a B+.

Sing (cowriter/producer/director Stephen Chow, "Shaolin Soccer") is a petty thief who yearns to be a member of the notorious, but smartly suited, Axe Gang, so he has his sidekick (Lam Tze Chung , "Shaolin Soccer") impersonate their mob boss at Pig Sty Alley's barbershop hoping to blackmail the barber for some petty cash. Although it is well known that real gangsters never bother with the poor, the denizens of Pig Sty Alley include some well hidden martial arts masters and when Sing's shenanigans draw forth Brother Sum (Chan Kwok Kwan, "Shaolin Soccer") and the real Axe gang, it is the beginning of a major "Kung Fu Hustle." With "Kung Fu Hustle," Stephen Chow gives the history of kung fu and myriad film genres the 'Abrahams, Zucker & Zucker' treatment. This laugh til your sides hurt flick pays comical homage to movies as disparate as "West Side Story," spaghetti westerns, 1940's dance musicals, "Spider-Man," "The Matrix," "The Mask," "The Shining," Bruce Lee movies, "The Seven samurai," film noir and Warner Brothers cartoons. It's inspired silliness at 100 mph. The film begins with moody violence, as Stetson-hatted Crocodile Gang Boss (Xiaogang Feng, "Big Shot's Funeral") breaks his sultry wife out of an impotent police station, but he and his men are stylishly taken out by the dancing Axe Gang. The orchestral score gives way to traditional Chinese music (original music by Raymond Wong, non-original music by Pablo de Sarasate from various works) and the three sided tenement known as Pig Sty Alley, run by a sleazy, aluminum hair-clipped Landlord (Yuen Wah, "Enter the Dragon") and his battle axe of a wife, the indomitable Landlady (Yuen Qiu, "The Man With the Golden Gun"). The Landlord visit's Donut's (Dong Zhi Hua) cafe for a gratis meal and steals a kiss from Jane, the buck toothed whore, while Landlady, cigarette permanently installed in the corner of her mouth and coifed in her ever present curlers, verbally abuses her tenants for late rent payments. When the Axe gang descend, Pig Sty's effeminate Tailor (Chiu Chi Ling) and laborer Coolie (Xing Yu) are revealed as formidable fighters, but the ante is upped when the magical Harpists are sent in under cover of night. Pig Sty has more surprises up its alley, but the Axes counter by recruiting the hapless Sing to spring the world's top killer (Leung Siu Lung, The Beast, an old man in plastic bath sandals) from a menacing asylum. A final showdown literally takes to the skies, yielding yet another revelation from a most unlikely source. Chow, who cowrote with Tsang Kan Cheong, Xin Huo and Chan Man Keung, excels with slapstick humor, referential ribbing and his artful yet hilarious action (choreographed by Yuen Wo Ping ("Crouching Tiger, Hidden Dragon," "The Matrix") and frequent Jackie Chan collaborator Sammo Hung). Outlandish kung fu 'moves,' like the lion's roar or toad style, come from various training schools. Special effects are used to apply cartoonish flourishes like the exaggerations of "The Mask." Timing is exquisite. Chow waits just the right number of beats after Landlord's been flung off a balcony by Landlady to have a flowerpot land on his head. Ofttimes, the impossible isn't shown, but cut to, the feat having been too extraordinary for the human eye to catch. Chow's use of romance, though, is an unsatisfying distraction that bogs down the action. Fong (Huang Sheng Yi) is a mute ice cream vendor from Sing's past. Her sentimental saving of an all day sucker may equate to true love, but the lollipop's no match for the tossed off sight gag of an ill-fated kitten's shadow. "Kung Fu Hustle" bustles with playful genre bending while its creator revels in the martial arts movies he grew up with. Chow seems sparked with a touch of divine madness.

Kumiko (Rinko Kikuchi) is a lonely 29-year old Tokyo Office Lady working at a job that she hates. When she finds an old discarded VHS tape of the American film classic, “Fargo,” she believes it is real and her destiny is to travel to that titular land and find the money that was buried in the snow. Her journey will be thousands of miles but that will not deter “Kumiko, the Treasure Hunter.” This is yet another “based on a true story” but in this case, fact is crazier than fiction and director David Zellner (with co-scribe Nathan Zellner) brings the story to the big screen. Oscar-nominated actress (“Babel (2006)”) Rinko Kikuchi is the titular hunter and she gives life to her tragic character. As she faces the increasing pressures from her boss and her mother – she constantly insists her daughter get married - Kumiko sinks deeper and deeper into the fantasy that she created in her mind. Kumiko studies the “Fargo” video tape so many times that she wears it out, jamming the play deck. She buys the DVD of the movie and uses it to pinpoint, in her delusional mind, the exact place where Steve Buscemi’s crook, Carl Showalter, buried the loot and marked the spot. She uses the images from the DVD to create a needle point map that pinpoints the location of the money and leaves her troubled life for one of the search for buried treasure and freedom. Kumiko endures all the obstacles she faces trying to get to her treasure and, along the way, is helped by kind strangers. In particular, a policeman (David Zellner) tries to make her understand that “Fargo” is a fiction film, not a documentary; and, an older woman (Shirley Venard) takes Kumiko into her home and helps her in her expedition. Kumiko steadfastly refuses to be deterred from her plan and makes her way, alone, into the wilderness to find her destiny. What should be a tragic story has so many upbeat turns that it charming and affective. It is obvious, to us the audience, that Kumiko has some deep psychological issues, among them obsession and delusion. Still, we root for her and really want her to succeed, making us as delusional as she. This is a good thing because we get to go with her on her quest and share fantasy.