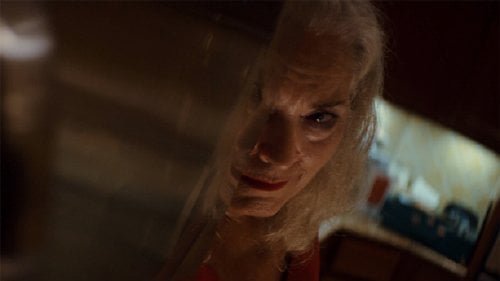 When she's reunited on Thanksgiving with the extended family she hasn't seen in years, she's greeted warmly, but there's also a sense of walking on eggshells around the outsider who is "Krisha."

The film begins with a long take as Krisha (writer/director Trey's aunt Krisha Fairchild, "The Killing of John Lennon") disembarks a rental, her skirt caught in the door a la "Three Women's" Shelley Duvall, muttering and swearing to herself as she first rolls her bag to the wrong house, crosses a lawn and steps in a puddle. We watch as she's warmly but gingerly greeted by three generations of family, many grown almost beyond recognition. As one of the gathering, Krisha is obviously out of place. Led to her room by sister Robyn (writer/director Trey's mother Robyn Fairchild), we see Krisha regroup, revealing that her bandaged finger hides the missing top joint of an index finger. She removes her crucifix necklace to begin her pill popping ritual, one which will be repeated throughout the day. Writer/director/editor Trey Edward Shults recently won the John Cassavetes Award at the Independent Spirits for his first film, a very fitting honor given his film's shared DNA with "A Woman Under the Influence." But Shults, who began his career as an intern on a couple of Terrence Malick films, has his own, very distinct voice. His third iteration of his original short was shot using his own family (with a few professional actors, of which his starring aunt is one) in his parents' home but bears no resemblance to a home movie. His from-the-inside-out, humanistic look at an addict confidently veers in tone from drama to comedy to outright horror, aided by cinematography (Drew Daniels) which claustrophobically shifts aspect ratios and lenses, a sound design that amplifies jarring noises, Brian McOmber’s unsettling score and Krisha's own ability to alter her appearance to fit the mood, an effect in and of itself. The home, with its two story height living area, upper rooms reached by a staircase to a balcony/hall, gives the impression of an amphitheater, the Roman/Greco association intensified by the strapping young males frequently engaged in arm and body wrestling and Robyn's pack of rescue dogs. Krisha is thrown into a spotlight of sorts when Robyn informs her she's leaving on a lengthy errand to pick up their mother, leaving her sister to prepare the meal. The sound of chopping, the enormous size of the bird, the sight of its gizzards are turned into horrors by Shults, alleviated by cuts to scenes of Krisha relaxing outside with Uncle Doyle (Bill Wise, "Boyhood"), engaging in an improvised conversation which begins jovially before turning inappropriate then harshly bullying ('You are heartbreak incarnate, a leaver, an abandoner..'). The arrival of Grandma (Trey's grandma, Billie Fairchild, who suffers from dementia), brings the family together again, but Krisha's attempt to reconcile with her son, Trey (Shults), has gone poorly and the ease with which the rest of the family interacts around her in the kitchen drives Krisha to a secret bottle of wine. The film ends with parallel scenes depicting what Krisha needs and what really happens - or is it what really happens and what she expects? Shults has an uncanny grasp of how to push the tools of his trade in imaginative ways, his "Krisha" a reinvention of the character study. Grade: