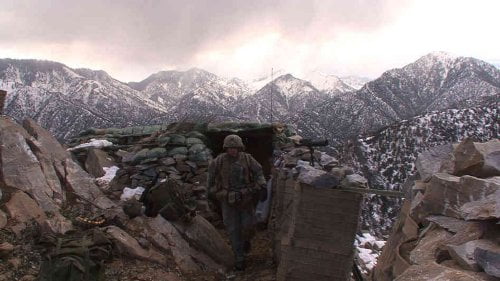 In 2010, Sebastian Junger (with the late Tim Hetherington) - embedded for a year with a platoon of American soldiers in the deadliest valley in Afghanistan - brought out the Oscar-nominated documentary “Restrepo.” Four years later, the filmmaker returns us to the same men in the same place facing the same dangers in the valley named “Korengal.”

Now that Company B has departed the Korengal Valley, detonating their Restrepo base on the way out, Sebastian Junger revisits the men who survived it. If one has seen his Oscar-nominated "Restrepo," "Korengal" plays like outtakes mixed with talking head reflections. No disrepect to his subjects, but this is simply more of the same - we don't really need to see one soldier after another define bravery as putting one's life on the line for another. For those who have not seen "Restrepo," "Korengal" will provide a good picture of just what Company B was up against (not to mention the villagers caught between factions) and the much loved soldier the base was named after. For those who have it feels like Junger decided to make use of footage he didn't in the first film.

If you saw Junger’s “Restrepo” you can pretty much say you saw “Korengal,” too. As said, it is the same men as before but with recently recorded talking head interviews with the survivors of Battle Company. Their story is one of violence, life and death, boredom, adrenalin rush and loss. They do not put their lives on the line for God and country. They do it, as one young soldier said, “for the guy on your right and left.” “Korengal” is an earnest work that makes you feel for those soldiers that Junger follows and interviews. They are the ones who bore the brunt of inept US decisions made post 9/11 and are the ones who died because of these decisions. But, I see little reason for simply rehashing the material and presenting it in a slightly different package.