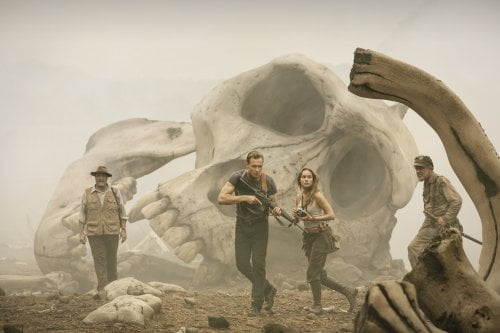 It's 1973 and NASA has just launched Landsat 1 which detects something unknown in a South Pacific area known for missing ships and planes. Monarch operative Bill Randa (John Goodman) convinces Senator Willis (Richard Jenkins) to allow his team to piggyback onto Landsat's mission in order to beat the Russians to this uncharted land mass, but he also requests military support for a reason he keeps close to the vest in "Kong: Skull Island."

What do you get when you mash up "Apocalypse Now," "Jurassic Park" and the legendary "King Kong?" With a story by John Gatins ("Need for Speed"), screenwriters Dan Gilroy ("Nightcrawler"), Max Borenstein (2014's "Godzilla") and Derek Connolly ("Jurassic World") have reimagined Kong as a Vietnam era anti-war movie, the film's real villain Lt. Colonel Preston Packard (Samuel L. Jackson), itching to kill after having 'abandoned' the war in Vietnam. While this was a good idea, bolstered by the marooned WWII pilot Hank Marlow (John C. Reilly) whose twenty-eight years on the island have made him deeply appreciate the 100 foot ape, the film's characters, principally former British Black Ops Captain James Conrad (Tom Hiddleston), are underwritten. Director Jordan Vogt-Roberts makes a huge leap from his indie “The Kings of Summer" to blockbuster popcorn fare and he doesn't waste any time unveiling his M.U.T.O.s (Massive Unidentified Terrestrial Organisms). Skull Island is surrounded by a perpetual storm system, something Packard believes his Sky Devils will be able to penetrate in their military choppers, even when Landsat's Victor Nieves (John Ortiz, "A Dog's Purpose") votes no. After a hairy ride through swirling dark clouds and lightning bolts, a gorgeous view appears, war photojournalist Mason Weaver (Brie Larson) clicking away. After dropping 'seismic charges' Randa claims will help them determine the island's underground mass (Weaver and Conrad appear unconvinced), they fly right into the territorial Kong's path. The fleet of choppers are dashed to the ground, survivors scattered over a 4-5 mile radius. Conrad and Randa's group decide their best option is to head north in hopes of signaling their ship. Packard, clutching his downed men's dog tags, is hell bent on revenge. Sky Devil Chapman (Toby Kebbell, "Dawn of the Planet of the Apes," who also portrays Kong in motion capture) is on his own. When Conrad's group comes across man made gates, Weaver focuses her camera and is startled by the eyes of a camouflaged native. As they're surrounded, Hank makes his entrance, ensuring the group that the natives are peaceful. As he comes up to speed on what's happened since 1944 ('Did the Cubs win?'), he tells them that Kong is the last of his kind, the island's protector from the far more lethal creatures he's dubbed skullcrawlers. When this group eventually meets up with Packard's, he'll insist they head west to save a man we already know is dead, the very direction these lizard-like beasts emerge from. There are all kinds of beasties on display. Birds which look lovely in flight are actually horrifying, skeletal things which attack. Enormous water buffalo are benign. A huge spider (a tip of the hat to the 1933 original) has terrifying modes of attack and Chapman is unwittingly saved from a tentacled sea creature by Kong himself. Kong himself is massive, his head and maw impressive in its detail, but his walking backside looks more human than ape. The comparisons to "Apocalypse Now" are apt, from its boat (fashioned from Hank's old plane) heading upriver to choppers against an orange sun to the napalm Packard deploys to the film's vintage rock 'n roll soundtrack. The film's lead is even named after the author of its genesis, 'Heart of Darkness.' The "Jurassic Park" influence is evident from Randa's Hammond-like character to its benevolent beasts and the modes of attack of its man eaters. One of the film's more inspired ideas is how it homages the Empire State Building climax of the original with Kong's apocalyptic introduction. The film's ensemble is a real mixed bag, several, like "The Great Wall's" Jing Tian, barely registering. Hiddleston is a stick figure hero, Sam L. Jackson a parody of himself. Best is John C. Reilly, the film's comic relief and true heart. Brie Larson as a feminist Fay Wray has presence, but her connection to Kong is weak. Shea Whigham and Thomas Mann are the most notable of Packard's Sky Devils. "Kong: Skull Island" is a fun ride, but one comes away wishing the filmmakers had dug a little deeper. Its characters have too many different motivations to see them become monster chum without sufficiently exploring their conflicts. Then again, the movie's close leaves little doubt that most of those left standing will be back. Grade: