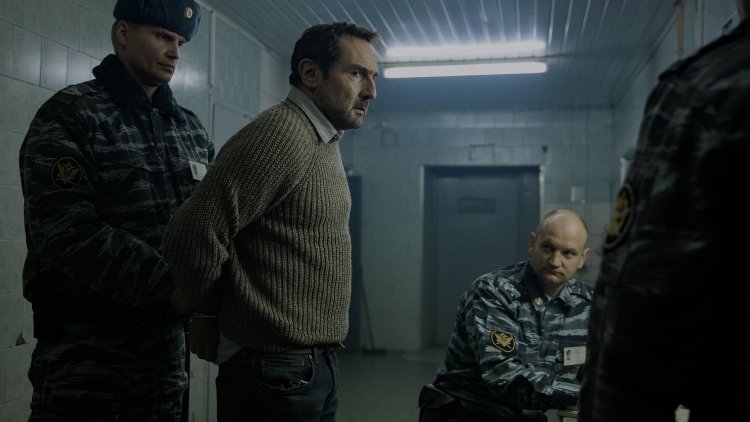 Mathieu Roussel (Gilles Lellouche, "Tell No One") has spent six months in Irkutsk with his wife Alice (Elisa Lasowski) and young daughter Rose (Olivia Malahieude) as the director of the Alliance Francaise, yet he fails to see the move hasn’t helped his marriage and that most Russians regard the French as weak and morally depraved.  After being observed dressing as a princess to amuse Rose at home and staging a homoerotic ballet for work that results in Russian walkouts, Mathieu is arrested in his home and charged with disseminating child pornography and molesting his daughter.  Even with Irkutsk’s best lawyer and the French Embassy on his side, there is little Roussel can do to fight Russian “Kompromat.”

Cowriter (with Caryl Ferey,)/director Jérôme Salle (writer, "The Tourist") traveled to Russia promoting prior films and noted its climate of constant danger, so when he heard about a fellow Frenchman who was framed with kompromat, he decided to ‘very loosely base’ a film on the incident.  But while “Kompromat” is a popcorn political thriller with some genuinely tense moments, it suffers from believability issues with its two main characters.

We have to accept that Roussel is incredibly naïve, a tough obstacle to overcome for a diplomat taking a post in Siberia.  While we can dismiss his Russian nanny Julia’s (Larisa Kalpokaite) frosty response to his playful indulgence of his daughter, once two male dancers begin simulating lovemaking on stage we have to wonder why those of us who are not career diplomats recognize a dangerous line where Roussel does not.

After the dance, Roussel meets a beautiful blonde, Svetlana (Joanna Kulig, "The Cold War"), at the reception.  She tells him she loved the ballet, but she disappears like Cinderella after they dance.  He’s warned that the man standing at the bar observing, Rostov (Mikhail Gorevoy), is FSB.  Soon after, his house is raided and he’s taken away, a hood placed over his head.  When he rejects the accusations made against him, he’s told Russian authorities have a deposition from his wife, who had left the country with their daughter (a flashback will reveal the marriage was on very shaky ground, Matthieu jealous of a former lover, Alice already having threatened to leave).

Salle creates a palpable sense of hopelessness, Roussel’s lawyer Borodin (Aleksey Gorbunov), the ‘best in Irkutsk!,’ genuinely sympathetic but realistic, the French Ambassador (Louis-Do de Lencquesaing) and embassy’s Michèle (Judith Henry) supportive but distressingly impotent.  It is up to Mathieu to rescue himself, first having to journey from Irkutsk to Moscow, then through the woods to the Estonian border, all with the imposing Ivanovich (Mikhail Safronov) on his tail.  Yet once again, we observe him continually texting Svetlana, despite the danger she’s warned him of, and she inexplicably comes to his aid, despite their almost nonexistent relationship and the unfathomable consequences for her should she be caught.  She is the wife of Chechnyan war vet Sasha Rostov (Danila Vorobyev), a character deftly employed to showcase how Russian authorities mistreat their own, and the daughter-in-law of that FSB chief.

Salle and his production designer use Lithuania as a convincing stand-in for their Russian locations, the atmosphere one of exotic otherness whether in hunter’s woods, checkpoints or cramped Soviet era apartments.  But Salle’s screenplay, while illustrating Russia’s oppressive regime and the regressive mindset it fosters, has his protagonist rely more on luck than capable know how to overcome them.

Mathieu (Gilles Lelouche), a career French diplomat, has taken the challenging job in Irkutsk, Siberia as head of the cultural Alliance Francaise. He hosts an avant garde LGTBQ+ ballet performance and some patrons walk out. He is later arrested for child molestation and is jailed. Realizing he was framed, he hatches a desperate plan to escape his captors in “Kompromat.”

According to Merriam-Webster dictionary, the word “kompromat” means: “compromising information that is used to blackmail or discredit a person or group usually for political purposes.” This defines the tone of this thriller, by director Jerome Salle, that pits confused and frightened Mathieu against a secret police service that has been around, in various guises, since Czarist Russia - from the Cheka to NKVD to KGB and finally to its latest alphabet soup, the FSB.

When the diplomat is arrested, he is only told, vaguely, what the charges are and why. He is told “child molestation” and a kangaroo court sentences Mathieu to prison – in Russia. You know it is not going to go well for the Frenchman and, when the prison population finds out his charges, it is going to get worse. And, it does.

As the film begins, there is a declaration that it is “very loosely based on real events.” Apparently, the filmmakers could not acquire the rights to the real story and created a fabrication that actually touches on Yoann Barbereau’s true story elements of survival and escape. The result is a political thriller that is more of a personal journey of redemption and freedom.

"Kompromat" will be available in select theaters and on VOD from Magnet Releasing on 1/27/23.