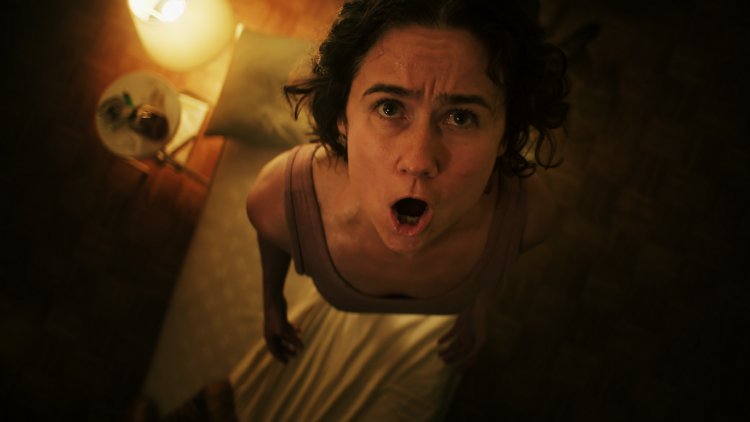 When we first meet Molly (Cecilia Milocco, "Britt-Marie Was Here") she’s being kissed by her partner who leaves her to fall asleep on a beach, but when she awakens she’s in the common room of a psychiatric hospital.  Interviewed by her doctor, Kristoffer, she is calm and says she is now ready to go home.  That she does, alone, lugging a suitcase from a bus up a hill, but ‘home’ is a new apartment which quickly becomes unsettling because of the insistent “Knocking.”

Director Frida Kempff spins Emma Broström’s adaptation of Johan Theorin’s novella into not only a paranoiac horror thriller heavily indebted to Roman Polanski’s “Repulsion” and “The Tenant,” but a stand for the voices of the marginalized.  Featuring a performance from Milocco which straddles the line of sanity, one which is both meek in characteristics and brave in action, as well as psychologically attuned cinematography from Hannes Krantz ("The Unthinkable"), “Knocking” is a smart and artful genre film.

From the film’s opening moments through Molly’s unpacking in her new apartment, we surmise that she suffered a breakdown when her partner drowned as she slept on that beach.  The filmmakers’ keep our perspective off kilter along with Molly’s from the very beginning, as each time she glances outside her new apartment window, we’re thrown back to that beach (later, Molly will begin to see a woman who looks exactly like her in another apartment in a building across the way).  She’s greeted by the building super, Peter (Krister Kern, "Border"), who seems pleasant enough and tells her he’ll be by to put her name on her apartment’s door.

Molly seems capable and rational as she quietly goes about her business, assuring Kristoffer that she is OK when he calls to check in with her.  But that night as she lies in bed, the distinct sound of knocking comes from overhead.  Molly ventures upstairs to the apartment above hers and asks its resident, Kaj (Ville Virtanen), if it is him.  He denies any knowledge of it quite abruptly and closes his door.  That he looks like someone from another movie about a Nazi war criminal carrying on secret abominations in the present adds to the oppressive atmosphere.  As does the heat visualized by Molly’s hair fanned out over her pillow, her bedclothes barely covering her sweaty limbs, and overripe fruit’s jammy flesh bursting out of its skin.

The situation escalates with other neighbors, Per (Albin Grenholm), and Atif (Alexander Salzberger), whose threatening behavior towards his wife compels Molly to call the police (Emil Almén and Karin de Frumerie).  The filmmakers continually make us question Molly’s sanity along with her, as every time she explains why she’s troubled, she does indeed sound crazy (interestingly and perhaps pointedly, the male policeman is a lot more solicitous of her than the female).  Then the female moaning begins to emanate from a vent in Molly’s bathroom.

Everything about the production contributes to the film’s unsettling, hothouse atmosphere.  Sound, is, of course, essential, annoying knocking sounds beginning to form patterns which Molly begins to interpret as Morse code (most amusingly, the Swedish word for ‘knocking’ actually sounds like knocking).  Camerawork is rarely still, capturing Molly from extreme angles, rotating around her, shooting above her and even at one point incorporating the mounted camera trick from the 1982 freak-out “Angst.”  And speaking of Polanski, another above-and-below-the-waves shot feels ripped right out of Rosemary’s rape ‘nightmare.’  Martin Dirkov’s ("Border") score ranges from quiet woodwinds to the full orchestra which pulls Molly out of slumber, later featuring anxious drumbeats prodded with plucked strings.

The film eventually finds itself entering the classic territory of the psychiatric patient no one will believe (Soderbergh’s “Unsane” and 2020’s “The Invisible Man” are two recent examples) as even facts we believe to be established are moorings stripped away.  Above all, though, Kempff’s compassion for her protagonist prevails.