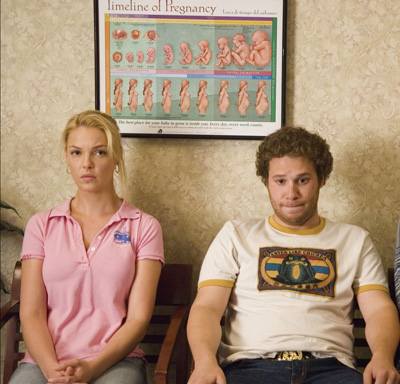 Entertainment TV production assistant Allison Scott (Katherine Heigl) gets a big break when asked to be an onscreen personality. She and her sister hit the town to celebrate her new job and she meets ambition-deprived Ben Stone (Seth Rogen) at a local watering hole. She and Ben have a fun, meaningless, drink-sodden one-night fling, never expecting to see each other again. Fate takes a hand, however, when they learn that Allison done got herself “Knocked Up.”

Much to her surprise, Alison Scott (Katherine Heigl, "The Ringer," TV's "Grey's Anatomy") is promoted from production assistant to on-air talent at the entertainment news show she works for. When she goes clubbing to celebrate with her older, married sister Debbie (Apatow's wife, Leslie Mann, "The 40-Year-Old Virgin"), Alison meets sweet geeky stoner Ben Stone (Seth Rogen, "The 40-Year-Old Virgin"), then is horrified to find him in her bed the next morning. Even worse, eight weeks later, Alison discovers she is "Knocked Up." With his latest, writer/director Judd Apatow ("The 40-Year-Old Virgin," TV's "Freaks and Geeks") proves he has a very unique talent - he can create a male arrested adolescent gross-out comedy while playing to and understanding the emotions of women. Just as in his "40-Year-Old Virgin," it is good fun to observe men shirking responsibility and behaving like overgrown kids while the women in their lives are at turns nurturing and exasperated. In both, Apatow's hero is an unlikely romantic choice whose innate sweetness ensures the love of a good, if over-matched, woman. Ben's world is comprised of a bunker of buddies all living on his meager accident settlement as they plot to take the world by storm with their Internet site that will provide pointers to celebrity nude scenes, an idea they do not know has preceded them, but which they delight in developing. There is both camaraderie and competition among the group who include the mouthy Jonah (Jonah Hill, "10 Items or Less," "Accepted"), Jason (Jason Segel, TV's "How I Met Your Mother"), a lothario who continually hits on Debbie, hyperactive Jay (Jay Baruchel, "Million Dollar Baby") and Martin (Martin Starr, TV's "Freaks and Geeks"), who grows body hair on a bet while literally 'wasting' through the days. Alison's world may separate home and family, but she also has doses of friendship and friction. As her male boss challenges and supports her, his female compatriot obviously (and humorously) drips with jealousy. Alison lives next door to her sister, whose fears about the state of her marriage come through as possessive nagging. When Alison tries to make things work with Ben, Debbie disapproves completely, but Pete (Paul Rudd, "The 40-Year-Old Virgin," "Diggers"), Alison's brother-in-law, embraces him. Seth Rogen broke out as Steve Carrell's counterpoint in "Virgin" and he really proves himself here as a nice schlub who tries to do the right thing, a trait that casts him heroic when labor kicks in (supported by great character work by Ken Jeong as the controlling Dr. Kuni). Heigl certainly looks like an out-of-reach prospect and while she leans towards bland, the actress does convey comedic quandary over her predicament. Paul Rudd is always a welcome addition and his hen-pecked husband is endearingly sympathetic while Mann does a great job twisting internal insecurities into outward antagonism. Of Ben's buddies, Segel's oily perf is a complete 180 from his television character. Watch for Ryan Seacrest taking the piss out of himself and Steve Carrell making funny as themselves. Carrell's "Office" costar, B.J. Novak, also appears as a young doctor. Pete observes that marriage is just like 'Everybody Loves Raymond,' but not funny. with the warmly amusing, if not outright hilarious "Knocked Up," Apatow has made a natural progression from exploring sex and love in "Virgin" to the complications of creating a family. He's the Farrelly Brothers filtered through their wives and mother.

Allison, a 24-year old entertainment journalist, is on a career fast track. Ben, on the other hand, is a pot-smoking slacker whose idea of a good time is to get whacked with his equally slack buddies. When Allison learns about her unexpected bun in the oven, she decides to tell Ben. He may be an irresponsible overgrown kid whose “job,” with his unemployed buds, is trying to get a nude actress movie stars web site online. He does have a sense of right and wrong, though. When Allison delivers him the unexpected news he declares, “I’m on board!” Those three little words will irrevocably change their lives. Allison may be in a family way but neither is remotely ready for a committed, monogamous relationship. They need to get to know each other, first, and the experience strikes home the huge differences in the lifestyles and ambitions of Ben and Allison. He is a slob, she’s not. She has career ambitions while he likes to spark up a joint first thing in the morning. This gap and the couple’s attempts to reconcile their obvious differences for the sake of their baby are the dramatic” meat of “Knocked Up.” The comedy is served up by Ben and his bevy of buddies and their crazy antics. They made me remember, well, what it was like to hang out and tie one on with the guys back in my youth. Director Judd Apatow, producers Shauna Robertson and Clayton Townsend and many of the behind-the-camera crew of “The 40 Year Old Virgin” hope that box office lightning strikes twice with their follow up work. Knocked Up” has the good nature, goofy humor and likable performances to make it a success, though I don’t think it is going to be quite the B.O. phenomenon of its predecessor. It should do well enough and attract more than the typical 18 to 24 male demographic – though there is enough very funny slacker humor to satisfy that crowd. Knocked” Up” is a story about taking responsibility for your actions cloaked in the slapstick humor of guys being guys. There is nice chemistry between Katherine Heigl and Seth Rogen as the star- crossed parents-to-be, showing their diametrically opposite personalities but such nice people that it makes you root for them to make it as a couple and, in nine months, a family. As likeable as their story is, though, it is the notable comedic contributions from Ben’s friends that is the ha-ha out loud substance of KU.” Things like a bet that one of the roomies not shave or cut his hair for year for free rent is carried through amusingly. There are a lot of these guyisms” throughout and they are funny. There is a degree of cliché in “Knocked Up” when Allison and her sister, Debbie (Leslie Mann), frantically sweep the pharmacy shelves of all the home pregnancy testers available, and I am talking scores of them. But, this bit of divisive overkill (wouldn’t 10 or 20 have been sufficient?) can be forgiven because of the overall sweet nature and goofiness of the film. If you compare “Knocked Up” with the similar, though far inferior, “Nine Months” of several years ago, it would be the sublime to the ridiculous. Apatow and company’s latest endeavor has a lot going for it, including heart and intelligence.