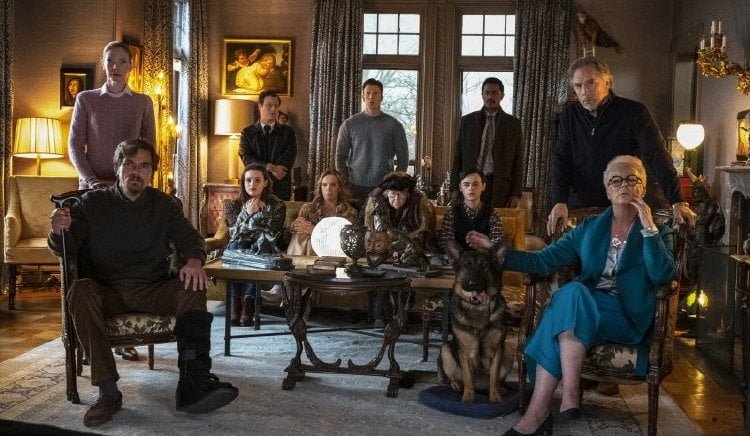 When housekeeper Fran (Edi Patterson) delivers breakfast to famous mystery writer Harlan Thrombey (Christopher Plummer) the morning after he celebrated his 85th birthday with his family, she finds him with his throat cut. Lieutenant Elliott (LaKeith Stanfield) and Trooper Wagner (Noah Segan, "Brick") arrive on the scene to interview Harlan’s three children and assorted spouses, children and employees. Behind them sits famous private investigator Benoit Blanc (Daniel Craig), who will make use of the fact that Harlan’s devoted nurse Marta Cabrera (Ana de Armas, "Blade Runner 2049") vomits if she tells a lie in “Knives Out.”

Writer/director Rian Johnson ("Brick," Star Wars: Episode VIII") takes a break from the Star Wars universe to get back to his roots. This murder mystery, which tips its hat to Sherlock Holmes, Edgar Allan Poe, Agatha Christie and Clue, features a sprawling cast of characters, almost all of whom are pegged as up to no good within the film’s first twenty minutes. So while the proceedings are always fun, it is disappointing that Johnson focuses suspicion on only two of them, the large eccentric family used more for color than mounting plot twists.

The film’s opening shot features two hounds bounding across the grounds of the shrouded-in-mist Thrombey estate, a red brick gothic revival beauty. Inside, the house is full of the eccentric tchotchkes one might expect in the home of a murder mystery writer, but the giant starburst of an inward pointing collection of knives is not only notable, but prominently positioned behind the interview subjects. Remember Chekhov’s rule of showing a gun in Act 1…

Linda Drysdale (Jamie Lee Curtis), Harlan’s eldest daughter, is the first in the hot seat and quick to point out she is a self made woman, the owner of a Boston real estate firm. Her husband, Richard (Don Johnson), panders in the direction of ‘good kid’ Marta, whose family is ‘from Paraguay’ (or Ecuador, or Brazil, depending upon whom you are speaking to). Son Walt Thrombey (Michael Shannon) runs the family publishing company and is quick to dish, telling Elliott that Linda and Richard’s son Ransom (Chris Evans), who has made nothing of himself, was inexplicably supported by Harlan. He is married to Donna (Riki Lindhome) and their son Jacob (Jaeden Martell), who spends the entire movie staring at his phone, is labeled a creepy, alt-right Nazi by the rest of the family. Joni (Toni Collette) is Harlan’s widowed daughter-in-law, a spacey peddler of facial creams whose daughter Meg’s (Katherine Langford) college tuition was – you guessed it – paid by Harlan. Harlan’s mother, Greatnana Wanetta (K Callan), is still alive but no one has any idea how old she is.

As flashbacks paint a picture of the night before, Blanc begins to lean on Marta who is desperate to hold on to secrets of her own (like the fact that her mother is undocumented) while literally barfing up others, like Richard’s affair. Then the will is read, shocking everyone but Ransom who seems unduly amused.