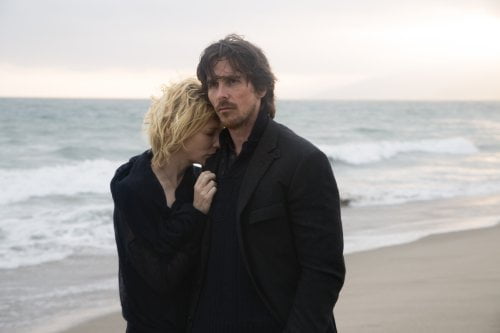 Rick (Christian Bale) is a filmmaker whose fractured family life has hobbled his ability to connect. Always searching, his travels around L.A. and Las Vegas are defined by the six woman who try to love him and the tarot reading which turns up the card "Knight of Cups."

Writer/director Terrence Malick returned to peak form in 2011 with "The Tree of Life" only to stumble the following year with "To the Wonder." The latter film was marred by its star, Ben Affleck, as well as Malick's multi-pronged point of view, neither of which suited his methods. With his latest, Malick's impressionistic, consciousness-melding-into-the-cosmos style serves his subject, Bale much more in tune with his vision than Affleck was, but his repetitive themes of bad fathers, faithless men, parental responsibility and Christianity are beginning to feel like therapy sessions gone on too long. It is also difficult to relate to a protagonist who treats women so shabbily, abandoning a wife (Cate Blanchett), a lovely free spirit (Imogen Poots) and a pregnant, married lover (Natalie Portman) to end up with the least defined of the six (Isabel Lucas, 2012's "Red Dawn"). It is Rick the hedonist we first meet, attending a party with three Asian women, drinking too excess. There is little direct dialogue, voice over narration giving us snippets of 'The Pilgrim's Progress' or Rick's thoughts and memories. A pink-wigged Poots gains Rick's attention, asking that they 'live life like no one's ever done it,' but he moves on. A sprawling garden party at the home of a Hollywood heavyweight (Antonio Banderas), a man himself used to gathering honey, leads Rick to Helen (Freida Pinto, "Slumdog Millionaire") as we wonder why such actors as Ryan O'Neal, Jason Clarke, Joe Manganiello, Thomas Lennon, Joe Lo Truglio and too many more too mention showed up for this shoot (there are actors listed in the credits I didn't even catch while watching the film - how does one miss Fabio other than ensemble overload?). An extended mid section charts Rick's marriage, another woman left for no apparent reason, Blanchett making her mark as a successful physician plunged into romantic grief. Cherry Jones appears happy as Rick's mom for what must be the sum total of twenty seconds. A stripper (Teresa Palmer, 2015's "Point Break") advises that Rick can be whoever he wishes, hanging around long enough to trail Kevin Corrigan in her wake. Portman visits Japanese gardens and splashes by the seashore (ah water, there's plenty of that here in the form of oceans, pools, aquariums), her love for Rick costing her dearly but not enough for him to stay. In addition to Rick's women, Malick introduces a brother, Barry (Wes Bentley), the more outwardly damaged son of their father (Brian Dennehy). There was a third son, lost to suicide, and a family priest (Armin Mueller-Stahl) advising that love has been shown by the suffering sent. Once again we're treated to the striking visuals of Emmanuel “Chivo” Lubezki ("The Tree of Life," "The Revenant"), shooting in L.A. minimalist glass abodes, back lots and gritty downtown streets. The dreamy visuals are set against Debussy, Corelli, Chopin and the more modern soundscapes of Serbian composer Arsenije Jovanovic. "Knight of Cups" is unlikely to win new converts to Malick's distinct realm of cinema, but despite its repetitive preoccupations, it has a spiritual power. Grade: