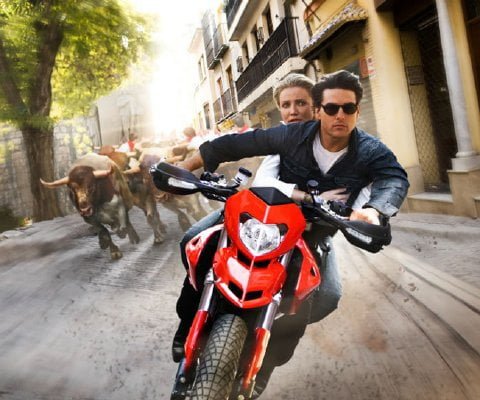 June Havens (Cameron Diaz) is charmed when Roy Miller (Tom Cruise) literally bumps into her at the Wichita airport. She's bumped from the plane for overbooking, then let on to discover it practically empty, an oddity she overlooks for the opportunity to flirt with Roy. But when the pilots and every passenger except for him end up dead, June's before and after perception of Roy is "Knight and Day."

Director James Mangold ("Walk the Line," "3:10 to Yuma") throws his hat into the action adventure romcom genre working with two of Hollywood's most daring stars and delivers a pleasurable lightweight summer movie that showcases what makes Cruise and Diaz appealing on screen. "Knight and Day" is like a global "Six Days and Seven Nights" crossed with "Charade." The film suffers from an unconvincing (and incomplete) final act, one that is ludicrous even within the film's own wonky workings, but Cruise and Diaz, who costarred before in "Vanilla Sky," make a surprisingly effective and likable team. After Roy lands the commercial jetliner in a cornfield somewhere in the Midwest, June awakens to find herself in her own Boston apartment. She'd been drugged and grabs onto her ex-boyfriend, firefighter Rodney (Marc Blucas, "Mother and Child"), and her sister April's (Maggie Grace, "Taken," TV's "Lost") wedding preparations, for some normalcy. She makes it to a fitting, but she's far from over her involvement with Roy. As he'd warned her, she's picked up by F.B.I agent Fitzgerald (Peter Sarsgaard, "Orphan," "An Education"), told Roy's gone rogue and that she's being taken in for 'safekeeping.' Next thing she knows, Roy's commandeered the car from its roof and she's driving from the back seat in a chase through the tunnels of Boston. Next stop, Brooklyn, is where June learns what all the fuss is about, a battery called the 'zephyr' which can be held in the hand but power a whole city. Its very young inventor, Simon Feck (Paul Dano, "There Will Be Blood") has left coded forwarding information behind for Roy. June will find herself on an Austrian train, a Caribbean island and in the middle of a Spanish running of the bulls, but it is not until she visits an innocuous address she's spied on Roy's phone that she will learn whether or not she can trust him. The first feature script by actor Patrick O'Neill has some snappy dialogue (Roy's reverie that sweeps June off her feet, some great back story delivered by suburban seniors Frank Jenkins (Dale Dye, "The Great Raid") and his wife Molly (Celia Weston, "Observe and Report," "The Box")) and repeating riffs. The 'Roy drugs June to get her out of harm's way' bit is repeated and is an economical and visually interesting way to move the action forward, little blurry glimpse montages that can be quite amusing, but it is this device that sinks the film's ending, screaming out 'screenwriting device' every step of the way. There is also the problem that April's wedding, the reason for June's return to Boston, is completely forgotten after having been used to put her on the run in a bridesmaid dress. Still Mangold stages a couple of really trippy chase scenes and Cruise and Diaz perform their own stunts. Cruise is cooly unironic, a Jack Bauer level uber agent whose facade slips ever so slightly as he gets to know June ("That hurt more than I thought it would," a great line well delivered when she doubts him). Diaz, whose character is introduced as a vintage car restorer, has more mettle than the average female but also is enough of an ordinary citizen to panic in extreme situations. She's never been more appealing than she is here, strong but falling at the same time. Jordi Mollà ("Elizabeth: The Golden Age") is a sleek villain as an arms dealer looking to buy zephyr and Falk Hentschel makes an impression as an Austrian hit man, but in the 'are they or aren't they' roles of F.B.I. agent Fitzgerald and his superior Director George, Sarsgaard and Viola Davis ("Doubt") are better than their roles demand. Blucas is a nice romantic foil as the regular vs. super man and Dye and Weston charm. Original Music by John Powell (The Bourne trilogy, "Jonah Hex") is offbeat for this type of film. Cinematography by Phedon Papamichael ("3:10 to Yuma") complements the wildly different locations. Action sequences are aces, although that motorcycle chase through running bulls bit occasionally looks unreal, pulling one out of its giddy insanity. "Knight and Day" (the title clumsily refers to an airport gift shop figurine Roy uses to house the zephyr) is an entertaining summer romp with a genuine romantic vibe running through it. If good will is seriously compromised but an unbelievable ending, at least there's a cute little bump at the tail end that helps restore positive feelings.