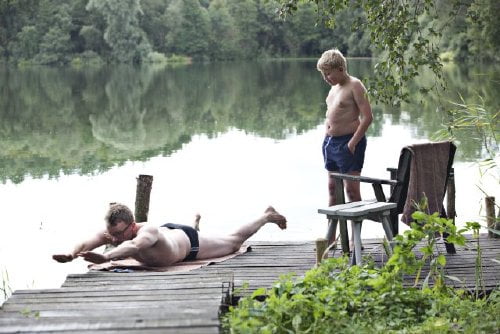 Frank’s (Frank Hvam) pregnant girlfriend, Mia (Mia Lyhne) is nervous that her fiancé is not father material. So, to prove how good a dad he wil be, he “borrows” his 12-year old nephew, Bo (Marcus Jess Petersen), to take the boy on a canoe trip with his debauched best friend Casper (Casper Christensen) in “Klown.”

On the one hand, Frank (Frank Hvam, Danish TV's 'Klovn') is trying to convince his pregnant girlfriend Mia (Mia Lyhne, "The Boss of It All") that he really is father material. On the other, his married best buddy Casper (writer Casper Christensen, Danish TV's 'Klovn') is gleeful about their upcoming canoe trip which Casper's dubbed 'The P&**y Tour.' Both things come together in unexpected ways when Frank's given charge of Mia's 13 year-old nephew Bo (Marcuz Jess Petersen), an awkward, bullied boy who pees sitting down in "Klown." This Danish TV-series-to-film is already slated for an American remake by Todd Phillips and Danny McBride, fitting, perhaps, as Phillips' "The Hangover" appears to have influenced the "Klown" guys (there's more than a bit of "Bad Santa" in the air as well). As far as its laugh factor, though, "Klown's" makers often mistakes shock tactics and socially unacceptable behavior for funny and frequently throw logic out the window to make their setups work. Oddly, its sweet side is far more successful than its raunchy one, perhaps because Frank is just as awkward as his charge. Frank is honest and uncomfortable in his own skin whereas Casper is a rule breaker and a classic horndog (the film's animated title credits are accompanied by a musical homage to "The Odd Couple"). Mia is considering an abortion(!) if Frank cannot convince her he could be a dad. Casper's wife Iben (Iben Hjejle, "High Fidelity, Danish TV's 'Klovn') alternates between indulgent sweet nothings and barking commands. Casper takes the latter behavior out on his friend. The guys' mentality is epitomized by the group behavior of their book club, stocked with all kinds of well known Danish people, like director Jørgen Leth ("The Five Obstructions") and producer/composer Bent Fabricius-Bjerre playing themselves. Before they convene, Frank asks for advise about his situation with Mia and is told to make her feel loved more than anything else in the world and the way to express this is to give her a 'pearl necklace' (and they're not talking jewelry). The club commences. Casper hasn't read the book in question, but lies and sucks up. Frank is honest and is told he can only remain if he submits to a 'schnozzle,' which he refuses to do, but we at least know that advise is a ticking time bomb. Before that canoe has even launched, Frank gets himself into hot water on several fronts. He ends up technically kidnapping Bo and Bo gets his first heaping of adult insensitivity when Casper lays eyes on the unexpected addition. Iben, unaware that Mia doesn't know Frank took the boy, sets Casper straight and the trio are off on a journey Casper plans to end at the Castle Alleycat, the best bordello in Europe. The guys make a stop at Papa Bear's Camp where Casper intends to cozy up to high school girls. Bo gets bullied for having a small penis and Frank's retaliation brands him a pedophile. Frank's thrown out of camp. Casper's accused of rape and it's not the misunderstanding he claims it to be. A capsizing incident finds them receiving the hospitality of Ronja (Marie Mondrup), a heavyset pancake maker who ends up in an enthusiastic three-way only to claim abuse the next day (a jaw droppingly nonsensical development). There's pot, hookers, gay sex and child pornography. Frank finally submits to his schnozzle. Bo is so traumatized by the end of the trip that Mia dumps Frank, but Frank wins back the boy's affections with a quest that involves underaged drinking and guns. The whole thing wraps with inappropriate photos being projected for the wrong audience. There are a couple of amusing moments - Casper's coercion of Frank's 'involvement' in sex with Ronja is amusing before they let the air out of the gag - but mostly the comedy is obvious and of the 'how far can we go' variety. Hvam is a funny bumbler and his attempts to bond with Bo are genuine. Young Petersen, not a vet of the TV show, is a natural as the shy, bulled kid who keeps hearing things he shouldn't hear and seeing things he shouldn't see. Her character might be written as a naive shrew, but Iben Hjejle is hilarious taking Casper to task. "Klown" is not any kind of laugh riot nor is it in any way original. It's an OK comedy about guys being really stupid. This may be one of the rare foreign films which could be improved upon being remade by Hollywood.

This has been touted by various shills in the US as the “funniest comedy of the year” and “better than ‘The Hangover.” It is not. It is about immature men behaving badly with Frank woefully failing at his planned bonding (until the end, of course) with Bo as he bumbles every opportunity to show Mia that he is dad material. Slap stick, bad taste, gross out and genital jokes make up the humor in “Klown” and it is all heavy handed and only occasional funny. The cast of “Klown” is a who’s who in Danish entertainment and the actors use their own names to name their characters. It is very clever, but only to those familiar with Danish TV and cinema, making this a hit in Denmark, but not here.