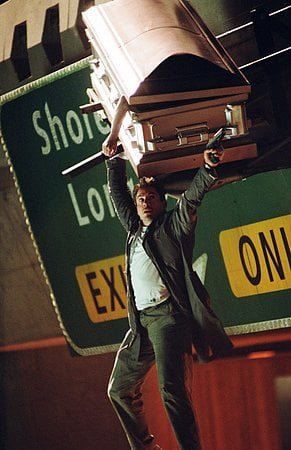 Harry Lockhart (Robert Downey Jr.) is a perpetually unlucky petty thief. When the alarm goes of while he is doing some after hours Christmas shopping, he goes on the lam, narrowly escaping arrest when he slips into a movie audition. Harry is hired on the spot to screen test for a private eye flick and heads out to LA-LA Land in “Kiss Kiss, Bang Bang.”

Petty thief Harry Lockhart (Robert Downey Jr., "Gothika") makes an unusual foray into Hollywood when he stumbles into a pre-Christmas casting call during a toy store robbery getaway. In LaLa Land, Harry's teamed with real life private eye "Gay" Perry Van Shrike (Val Kilmer, "Alexander") to do his research. Harry's playacting gets him a real case with love interest Harmony Faith Lane (Michelle Monaghan, "Mr. & Mrs. Smith") and into real trouble with Gay Perry. As in most things Hollywood, the make believe merges with the real as the cases cross in "Kiss, Kiss, Bang, Bang." Wunderkind screenwriter Shane Black (the "Lethal Weapon" series, "The Long Kiss Goodnight"), makes his directorial debut with this intermittently funny, self-aware film noir adaptation (from the novel "Bodies Are Where You Find Them" by Brett Halliday) that seems tailor-made for the DVD era and its audience versed both in the ways of filmmaking from disk extras and accustomed to thinking of box offices grosses as news. Black takes a screenplay approach, chaptering his acts (Day One Trouble Is My Business, Day Two The Lady in the Lake etc.), that has his main character addressing the audience to comment upon the film's progression when he's not making jokey film reference during the action. While Downey Jr. and Kilmer come through this exercise unscathed, the whole think is just too busy, too pleased with its own bratty hipness, and these faults help cover up another - the parallel mysteries being solved just aren't all that interesting. Still, "Kiss, Kiss, Bang, Bang" goes down easily while you're watching it, the empty calories of concession stand treats that are forgotten when the next real meal comes around. A prologue establishes Harry and Harmony's characters as young kids in Embrey, Indiana, a place which features prominently in the current day because it also has ties with Harlan Dexter (Corbin Bernsen, TV's "L.A. Law"), the man who played their favorite detective, Jonny Gossamer, and who visited their home town at a crucial point in time. In 'How Harry Got to the Party,' Harry is unaware that the girl he's instantly smitten with, the one he describes theoretically as 'that girl from high school,' is his childhood friend, another case of fantasy and reality merging. (Oh, and Dexter's present once again too as the party's host who has just publicly and prominently reconciled with his daughter.) After playing a flirtatious game of Hollywood lookalike (Harry trumps her Brazilian Billy Bob Thornton with a Native American Joe Pesci) with Harmony, Harry stops the film, directs some extras to step aside, then joins Perry for a stakeout that goes disturbingly wrong, leaving them with a body that circumstance forces them to dispose of. Things just keep escalating when said body shows up in Harry's bathroom right after they've learned that Harmony's sister committed suicide. While one can shoot holes in Black's intertwined murder mystery (the presumed identity of the corpse in the last act makes no sense given a major player's ability to determine otherwise earlier), his dialogue can be rat-a-tat, especially as delivered by Downey Jr. and Kilmer, whose exchanges crackle even from opposite ends of a telephone. Downey Jr. siphons his boyishly charming yet jumpy intelligence into Harry's persona while Kilmer goes into third gear, treating his unwanted tagalong with quiet, sarcastic disdain. Downey Jr. is never funnier than when riffing off Kilmer's uncomprehending insults as he tries to explain why he peed on a dead body and Kilmer's 'straight' face while responding to his "I Will Survive" phone ring is priceless. Black's situational fun also includes Downey Jr. losing, recovering and relosing part of his finger and his humor extends right into his character names, airline stewardess Flicka (Angela Lindvall, "CQ") giving Harry the chance to say 'Your friend Flicka,' and a pair of thugs named Mr. Frying Pan (Dash Mihok, "The Day After Tomorrow") and Mr. Fire (Rockmond Dunbar, TV's "Soul Food") providing a more generic form of wordplay. Unfortunately, many of the supporting cast are unable to stand out amidst a cluttered background and Michelle Monaghan works up little real heat with Downey Jr., at least not as much as Kilmer does. Shannyn Sossamon ("The Order") fares better in one specific scene with him as the ill-fated, pink-haired girl, Mia Frey. The screenplay with more style than substance is matched in the visuals, beginning with great retro opening credits that play like "The Pink Panther" crossed with the work of Saul Bass, all set to a jazzy score. L.A. architecture is featured at its neon coolest and the production and art designers make a hilarious statement with one trendy nightclub all decked out in gothic decadence for the holidays. And that about sums up "Kiss, Kiss, Bang, Bang," as glitzy as an aluminum Christmas tree with none of the holiday's meaning or warmth. Shine some pretty lights on it and it looks cool, but in essence it's just a hollow substitute for the real thing.

Scribe Shane Black has had a pretty lucrative career writing buddy/action screenplays for his “Lethal Weapon” franchise and adapts, in part, the 1959 novel by Brett Halliday, Bodies Are Where You Find Them, for his feature film-directing debut. Not having read Halliday’s original work, I’m not sure if the adaptation is faithful to its source material or just a mess at the hands of Black. Kiss Kiss, Bang Bang” is a mishmash of genres – action, comedy, thriller, private eye, noir and buddy films – that is so fragmented as to be almost unintelligible. Game performances by Downey and costar Val Kilmer, as LA private sleuth, Perry Van Shrike (AKA Gay Perry for obvious reason), try to make “KK, BB” a throwback to the hard-boiled detective films of the 1940’s and 50’s. But, the scattershot screenplay is too much for these likable actors to overcome and the film trudges to its confused finale. The story follows Harry as he heads west for his change of careers from unsuccessful thief to movie star. The studio teams him with Gay Perry to give the budding actor exposure to the life of a private dick to prepare Harry for his upcoming screen test. Lockhart takes the role a bit too seriously and tries to pass himself off as a real private detective. He meets a pretty actress, Harmony Faith Lane (Michelle Monaghan), who has her share of troubles and enlists Harry to help her. He doesn’t realize that they knew each other as kids. Harmony’s sister committed suicide, something she does not believe, and she wants Harry prove the so-called fact wrong. At the same time, the actor/faux detective and Gay Perry get involved in a real murder that will uncover deception, lies, buried family secrets and, maybe, a trip to the morgue for Harry. This all seems straightforward enough but throw into the mix Lockhart and Harmony’s shared passion for old Jonny Gossamer detective novels, an unscrupulous movie producer (Corbin Bernsen), lots of gun play and a severed finger stolen by a dog and we get a kitchen sink movie that is more confused than coherent. There are a couple of things that sparks some initial interest in “Kiss Kiss, Bang Bang.” It starts out with a clever credit sequence that smacks of such 50’s icons like “Peter Gunn” with cool graphics and a Henry Mancini-type score. Robert Downey Jr. provides voice-over narration throughout the film that is wrought with hard-boiled dialogue. I tend to dislike excessive use of such narrative but Downey does it well enough to make it acceptable. Finally, the chemistry between Harry and Gay Perry is palpable but, unfortunately, not enough to raise the film above its quagmire of a story. Shane Black should have chosen to direct or to write KK, BB” but not do both. He’s lucky to have a pair of stars that elevate things above what it should be, though not nearly enough to make it worth your while.