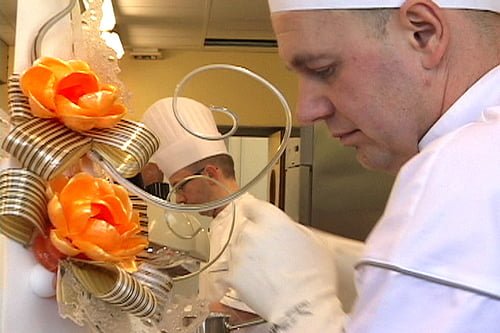 When documentarian codirectors Chris Hegedus and D.A. Pennebaker ("The War Room") met chef Jacquy Pfeiffer, they learned about Frances extraordinary pastry competition. The Meilleurs Ouvriers de France is only held every four years and being anointed an M.O.F., complete with the signifying red, white and blue collar that comes with it is so prestigious, President Nicolas Sarkozy announces the winners. They are the "Kings of Pastry."' Laura: Cooking competitions have become one of the mainstays of the every burgeoning genre known as reality television. But "Kings of Pastry" apart is set apart by many things, including a long historical tradition. It's also not really a competition - anybody who takes part can obtain his M.O.F. if he passes the incredibly difficult tests. Pfeiffer is an interesting subject in that he runs a pastry shop and school in Chicago partnered with M.O.F. chef Sebastianne Canonne. His family is American, but they travel with him to Lyon to support him in this extremely tough professional challenge and Canonne comes along to coach. A total of sixteen chefs have entered. The theme is marriage and Pfeiffer must end with a buffet table that features an elaborate sugar sculpture (Jacquy plans on making a wedding couple) as well as many other elements including cream puffs, a wedding cake and, most surprisingly, lollipops! The most spectacular element is the sugar sculpture and Hegedus and Pennebaker spend the most time documenting the building and transportation of these creations. Roll carts are apparently not allowed and the most dramatic parts of 'Kings of Pastry" involve the sculptures which do not make it to judging intact. And as Jacquy tells us, mistakes cannot be hidden - the judges even check the chef's garbage. While the filmmakers do a great job of showing just how stressful the M.O.F. is - these chefs are not only bakers but chemical and structural engineers and artists - they're a little lax in laying out the rules of the game. When they're not using Django Reinhardt guitar music, the film's sound has that tinny, hollow quality of home video. But they do get their cameras in up close and personal, the footage edited for maximum suspense. The end of the film brings many surprises, not least of which are the five chosen as new M.O.F.s. The emotion on display, from the experienced chefs judging the competition, to Sarkozy's tears at not being able to award all sixteen, shows just how passionate the French are about their pastries and the artistry of the craft. Jacquy Pfeiffer's personal capper back home in Chicago is a celebration of a different kind for having walked through the fire. It's a sweet and traditional ending to a film about traditional sweets. B

Cowriter (with Roger Bohbot, "The Dreamlife of Angels")/director Arnaud Desplechin's ("Esther Kahn") film is overstuffed with characters and ideas and literary references and musical styles and the diametrically opposed dramas of tragedy and comedy, and yet it is vibrant and alive and he's made it work. This is a totally unique portrait of one woman's tragedy and her ex-lover's comical rise from the ashes that encompasses themes of parental favor and sibling rivalries, sex vs. love, emotional neediness and mental stability. Throw in a couple of robberies, a breakdance and two haunting visits from beyond the grave and you have the richly chaotic tapestry that is "Kings and Queen." There are many parallels between the two story strands that Desplechin weaves around each other. Nora chooses a provocative print of "Leda and the Swan" as a birthday gift for her father while Ismaël informs psychiatric evaluator Mme Vasset (Catherine Deneuve, "8 Women") that women have no souls as she sits beneath a reproduction of Botticelli's "The Birth of Venus". He claims a fine relationship with his sister Elizabeth (Noémie Lvovsky, "My Wife Is an Actress") before a flashback reveals their last contentious meeting involving a cash gift. Nora receives a phone call from sister Chloe (Nathalie Boutefeu, "Son frère") looking for money from their dad. Nora's calm, responsible exterior masks a turbulent emotional background while Ismaël is manic and eccentric on the outside but also turns out to be compassionate and sensible in his reasoning. Their closest friends appear to be employees - Nora is aided in crisis by her assistant Claude (Geoffrey Carey, "Cousin Bette") while Ismaël has great affection for his pill-popping lawyer Maître Marc Mamanne (Hippolyte Girardot, "Jump Tomorrow") (the duo's robbery of the hospital pharmacy set to klezmer music is a comic highlight). "Kings and Queen" has so much content, no description is likely to do it justice. So many things about it usually constitute negative criticism, yet Desplechin pulls his elements together like some kind of grand symphony. Even his musical choices, beginning with Henry Macini's bookending "Moon River" (annoyingly loud in the sound mix at first), then careening through film genres and pop styles, seem thoroughly disparate yet achieve a crazy cohesion within the director's framework. The film is broken into two chapters, "Nora" and "Cruel Releases," and an epilogue, but neither chapter ignores one of the storylines and there is a beautiful balance, even shifting from comedy to tragedy. The actors are all superb. The sublime face of Emmanuelle Devos reflects an incredible array of our own perceptions as she moves from caring daughter to some kind of mythic monster and back. Cesar winner Mathieu Amalric keeps us guessing as to whether he's comically indignant or a crazy clown, but his humanity is never in doubt. Maurice Garrel ("Son frère") delivers a shocking soliloquy with Shakespearean weight after his frail representation of Nora's father which precedes it. Ismaël's father is played by Jean-Paul Roussillon ("Baxter") with hearty health and optimism. A scene where he takes out three would-be thieves is sure to be a crowd pleaser. Noémie Lvovsky makes a strong impression as Ismaël's grasping and spiteful sister whereas than Nathalie Boutefeu pales in scenes with Devos. Joachim Salinger plays two very different Pierres - the one immortalized by Nora and the real one we see in flashback - without making them seem like different people. Deneuve's usual cool beauty makes her an ideal sparring partner for Amalric and an amusing contrast to Elsa Wolliaston, the large, black poetess who is his calm and nurturing shrink. Newcomer Magalie Woch creates a suicidal sprite as Arielle, the inmate out to seduce Ismaël, but she and Amalric don't have strong enough chemistry to put over one of the film's final wrap ups, perhaps the film's only falter. "Kings and Queen" offers constant surprise without ever compromising its characters in servitude to plot. It leaves us with a little mystery too, as Nora proclaims that she's loved four men, only identifying two out of the five in her life.

Every four years, craftsmen throughout France compete for the prestigious Meilleur Ouvrier de France (Best Craftsman in France). Every craft competes and documakers Chris Hegedus and D.A. Pennebaker took an interest in the Best Pastry Chef competition, following three participants in their quest for the coveted red, white and blue collar that will signify they are “Kings of Pastry.” Unlike the reality cooking contest shows, like “Top Chef” and “Master Chef,” “Kings of Pastry” does not manufacture the drama of its competition. “Kings of Pastry” is real drama, more like the Olympics than a Betty Crocker cook off. The crème de la crème of the French pastry-making world spend years preparing to enter the competition with over 60 chefs selected to participate in a semi-final contest that will winnow their number to just 16 for the grueling three-day final. Master pastry chefs serve as judges and, unlike most contests, scrutinize every detail in the contestants’ painstaking preparations, even checking the trash for signs of waste. The finalists are given a theme to follow: for this M.O.F. it is weddings, and they must design and create a buffet table full of eye-pleasing, beautifully presented confections – an array of goodies including puff pastries, three kinds of chocolate candies, a three-tiered wedding cake, a brioche for the bride and groom’s breakfast, three types of tea time creations, a chocolate sculpture and, at the centerpiece of this display, an elaborate sculpture made entirely out of sugar. Plus, each contestant has to create a bijou, a small masterpiece of craftsmanship presented in a display case. The tension begins immediately as we meet three of the entrants for the 2008 M.O.F as they prepare, months, even years, before, their strategies for the three day cooking and baking marathon. Like athletes in training the contestants give everything to prepare for the big bout, leaving friends and family behind with single-minded purpose. Filmmakers Chris Hegedus and P.A Pennebaker explore the physical and psychological stress the M.O.F. contest puts on the competing chefs. The ups and downs during the three day cook off bring some actual “oh, s**t!” moments and nothing goes as expect. Well, for me, anyway. If you are addicted to the Food Channel and cannot get enough of Gordon Ramsey, “Kings of Pastry” is a must see. If you appreciate a good documentary, this is for you. And, if you have a sweet tooth, your mouth will water and your mind whirl with this carefully balanced ballet of culinary delight.