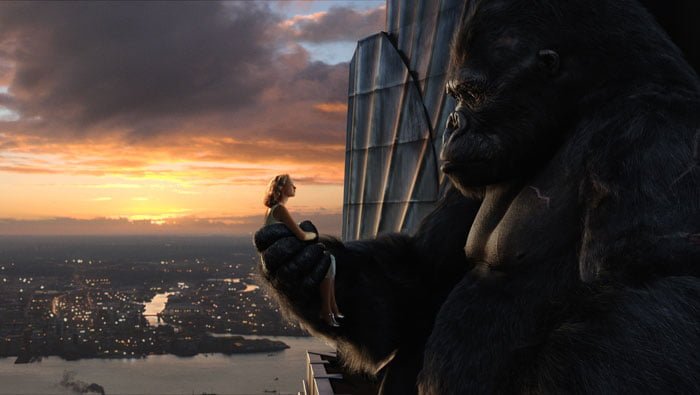 It is the midst of the Great Depression and struggling actress Ann Darrow (Naomi Watts) is at the end of her rope when the theater she works at unceremoniously closes. Hungry and desperate she attempts to steal and apple but is caught red handed. To her rescue comes filmmaker Carl Denham (Jack Black) who makes the pretty size four a proposition: come with him to the South Seas and star in his latest for fame, fortune and adventure. She finally agrees and takes the first step, aboard the tramp steamer Venture, to her new destiny in Peter Jackson’s remake of the classic, King Kong.”

Hollywood, since its undeserved high praise for helmer Scott’s Oscar-winning “Gladiator,” has been on the sword and sandal” bandwagon with such other ancient and medieval-set pics as “Troy,” “Alexander” and “King Arthur.” On the surface, “Kingdom of Heaven” would seem to fall in with the same clichéd crowd. But Kingdom of Heaven” is significantly different from its recent predecessors in that it deals with a time of political, social and religious intolerance that parallels the extremist views permeating the world today. It’s Muslim versus Christian as the fanatical Knights Templar-dominated forces of the newly crowned King Guy (Martin Csokas) oppose the far larger Muslim force led by master strategist Saladin (Ghassan Massoud). Guy is the successor to the more reasonable, moderate King Baldwin (Edward Norton in mask, sounding like he’s doing a Marlon Brando impersonation) who died, young, of leprosy before he could secure a lasting peace with the Muslim leader. The subsequent defeat of Guy and his hawkish followers is handled in a style reminiscent of Akira Kurasawa’s Kagemusha,” where the battle proper is not shown, but briefly, and the aftermath of that history-altering conflict reflects the horror and carnage of war. This leaves the real, big action sequence of the battle for Jerusalem as “Kingdom’s” significant moment. The battle is as stylish and energized as Scott’s opener for “Gladiator” where the Romans fight and defeat the barbarian Germanic hordes (the best scene in the movie to me). But, this time around, Scott puts the money shot where it belongs, at the finale, and does it well indeed. Techs are superb with the filmmakers eschewing much (not all) of the CGI work that has gone into making its kindred epics epic. It’s nice to see stuntmen actually doing stunts (an art form that is sorely missing in computer-created action) and huge sets being, in fact, huge elaborate sets. The craftsmanship of the filmmaking process is up there on the screen with production design (Arthur Max), costume (Janty Yates), camera work (John Mathieson) and editing (Dody Dorn). Stunt coordination and fight choreography are first rate. While the veteran team of thespians is unlikely to garner kudos come year’s end, the actors acquit themselves well enough. Orlando Bloom, as everyman turned hero Balian (there is a hero in every on of us), while not great, does a solid job portraying a man who meets his destiny directly and with a cool head. Liam Neeson, as Balian’s illegitimate father, Godfrey, is the best thing in the film though, unfortunately, out of the picture far too soon. Jeremy Irons, as King Baldwin’s strong right hand man, Tiberias, and David Thewlis, as the knights’ spiritual adviser (and warrior), the Hospitaler, give full dimension to their capable, compassionate characters. Ghassan Massoud gives the Muslim viewpoint good shrift with a full-bodied performance as the enlightened, wise and compassionate Saladin. The bad guys, and they are depicted on both sides just to make sure things stay balanced, are most prominent in the guise of Martin Csokas as Guy de Lasagnan, the power hungry and uncompassionate husband to King Baldwin’s beautiful sister Sybilla (Eva Green, The Dreamers).” Guy is the vainglorious type who knows it all and refuses Balian’s good-intentioned advice, courting disaster because of his conceit. Brendan Gleeson, as Guy’s wicked lieutenant, Reynald, chews the scenery and gets his just desserts. Eva Green, the least experienced of the cast, is used effectively in an almost diaphanous way as Balian love interest. William Monahan’s well-crafted script keeps the politico-socio side of things well balanced as Baldwin and Saladin stand for the voices of reason during a turbulent and explosive time. The two leaders moderate stance, with peace and tolerance at its epicenter, is the hopeful side of the story. This parallel to our current world situation is not done in a heavy-handed manner as Scott and company immerse you in their story. That the filmmakers both entertain and provoke thought, rather than mindless displays of carnage more typically used, making “Kingdom of Heaven” a cut above its “peers.” My hope is that “Kingdom of Heaven” gets enough good buzz to give it the shoulders of Ridley Scott’s Gladiator.” His latest is a better film with more heart and soul.