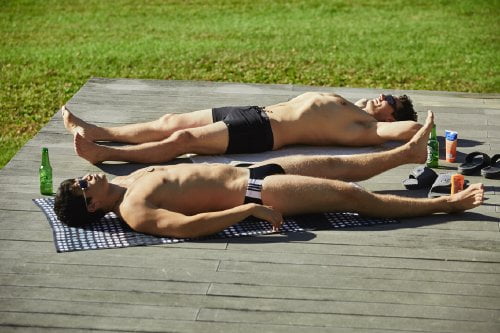 The Hollywood Wonderland murders are the most well known true crime story involving the porn industry ("Boogie Nights" featured a fictionalized account), but writer/director Justin Kelly's ("I Am Michael") film is based on a lesser known story from the opposite coast, told here with only the victim's name changed ('Stephen' was Bryan Kocis). It's a stylish presentation of a sleazy story of the exploitation of a willingly corrupted youth and desperate hustlers. Sean's quite willing to 'go all the way' for $1K, Kelly illustrating his rise with a music video montage, the gold name necklace gifted by Stephen swinging into the frame as he lunges forward accented with a musical flourish. He tells mom Janette (Alicia Silverstone, "Clueless") back home he's the only 'intern' asked to stay on, getting her approval to remain for a summer. Stephen also has a maternal figure worrying about his lifestyle, but his sister Amy (Molly Ringwald, "The Breakfast Club") has a better idea of what he's up to. Stephen also has a nosey neighbor (Rosemary Howard, "True Story") who questions Sean about all the young men coming and going from Stephen's suburban home. Meanwhile Joe's star Harlow (Keegan Allen, TV's 'Pretty Little Liars') brings Brent Corrigan to his attention just before his car is repossessed. Joe admits the severity of his financial situation and thinks Brent may be the answer to their problems. Stephen and Joe are both jealous predators looking to hang onto their mates, but Stephen loses when Sean decides to return home after Stephen won't meet his demands. Harlow suffers an abuse memory during a shoot, but while Joe is capable of comforting him, his attempt to deal with Stephen is inept, even holding the trump card - Sean lied about his age, only seventeen in his first few videos. After Jannette learns what her son's summer was really all about, the two have an epic blowout. Sean admits that he liked what he was doing and contacts Stephen to renegotiate, but Joe's already sent Harlow on an undercover 'audition' to free Brent the only way he knows how. For some reason, Franco seems drawn to these kind of roles, but he's never better than when he's reveling in sleaze. He's intense, a personification of rage so over the top, it's borderline comedic (Joe was a former Christian youth pastor, adding another layer of psychological conflict). Slater creates a more controlled (and controlling) character, a guy who is good at what he does if not ethical in his sharing of the wealth. Clayton's a good looking kid, the perfect 'twink,' who can engage in numerous sex scenes and still come across as innocent. Allen creates a sympathetic character in Harlow, damaged goods damaged further. (The film also stars "Unbroken's" Spencer LoFranco as Mikey, Sean's sympathetic costar, and TV's 'Scream's' Sean Grandillo as Stephen's new recruit). The film is full of sex and violence, yet Kelly still finds humor in his sordid tale. He wraps with the ironic achievement of Sean's dream, Stephen having taught his protegee perhaps too well. Grade: