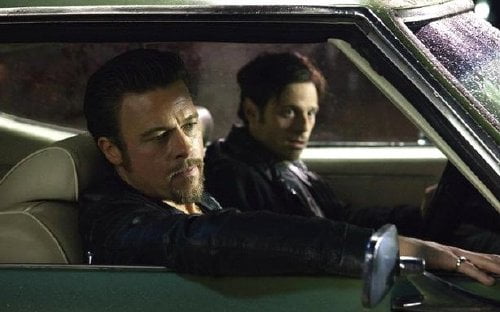 Johnny “Squirrel” Amato (Vincent Curatola) has big plans. He hires two young thugs, Frankie (Scoot McNairy) and heroin addict Russell (Ben Mendelsohn), to rob a big mob-controlled card game. The game was hit, once before, by its manager Markie (Ray Liotta), who later admitted the crime and got away with it. Squirrel’s logic is that Markie will be blamed if the game is hit again and the perpetrators will go Scott free – or so he thinks – in “Killing Them Softly.”

Johnny 'the squirrel' Amato (Vincent Curatola, HBO's 'The Sopranos') thinks he's got the perfect job and calls in Frankie (Scoot McNairy, "Monsters," "Argo") to pull it off. Seems Markie Trattman (Ray Liotta, "Goodfellas") arranged to have his own card game robbed, then bragged about it, so Johnny's sure Markie will take the heat if it happens again. But Frankie's not so smart and neither is his new recruit, Aussie junkie Russell (Ben Mendelsohn, "Animal Kingdom"), and fingers are pointing everywhere. That's when Driver (Richard Jenkins, "The Cabin in the Woods") calls in Jackie Cogan (Brad Pitt), a no nonsense hit man who nonetheless prefers to get the job done "Killing Them Softly." Writer/director Andrew Dominik ("The Assassination of Jesse James by the Coward Robert Ford") adapted George V. 'Friends of Eddie Coyle' Higgins' novel “Cogan’s Trade” with a view to satirizing these Boston mobsters by equating them with 2008's American financial meltdown. But while the comedy works, Dominik's film works more as a funny B picture than a condemnation of corporate culture, despite Pitt's terrific final speech. The grafting of TV and radio news blurbs featuring George W and Obama into action background is heavy handed and the connections are tenuous at best. Dominik's obviously done his homework watching Scorcese movies as he lays his groundwork with Amato's telling of Markie's doublecross with "Goodfellas" like flashbacks. The squirrel is a low level guy hoping to make a fairly low level hit to tide over his dry cleaning business into retirement and he's not impressed when Frankie brings Russell to meet him. Russell's been surviving by dog napping and dreams of saving up seven grand to buy enough heroin to seed a drug trafficking business, but he's mouthy and too fond of his own product. Why Johnny backs Frankie is anybody's guess. The bumbling crooks are amusing to watch and the dynamics of Jackie's negotiations with Driver intrigue when it's disclosed the 'client' represented is squeamish. Jackie has qualms of his own, too, not wishing to take out anyone he knows - too much 'emotion.' So Jackie calls in Mickey (James Gandolfini, HBO's 'The Sopranos') to do one of the hits only to learn Mickey's got another set of problems involving booze and hookers. Some aspects of corporate America do ring through - the surface politeness and attendance to rules covering (literal) back stabbing and anarchic greed - but the film would have worked better without wearing this agenda on its sleeve. Watching these Boston mobsters (and Mickey 'from the South') walk into and decide their fates is more than enough. Ben Mendelsohn is the first among equals in a terrific cast which also includes Sam Shepard ("Fair Game," "Safe House") as legendary enforcer Dillon, Hal Holbrook in a brief cameo and "The Town's" Slaine as dumb-as-a-box-of-rocks Kenny Gil. Director of photography Greig Fraser ("Let Me In," "Snow White and the Huntsman") follows the cast through tight, twisty and dimly lit spaces and indulges in some flash with an ultra-slo-motion hit through a car window. Russell's slides into drug stupors are comically transitioned. New Orleans locations in no way resemble Boston's south shore where the action is purportedly taking place. Musical choices are off the wall in just the right way with a Petula Clark cover of 'Windmills of My Mind,' the Velvet Underground's 'Heroin' and Johnny Cash's 'The Man Comes Around.' Dominkiks 2007's Pitt starring Western was a great film. "Killing Them Softly" is minor and disjointed, but fun underneath its pretensions.

This is the third film by writer-director Andrew Dominik who gave us an extraordinary sophomore work with “The Killing of Jesse James by the Coward Robert Ford.” This time, he adapts George V. Higgins novel Killing Them Softly and leads a huge ensemble cast to the task of bringing it to the big screen. Heading the cast is Brad Pit as hit man Jackie Cogan who is called in to clean up the mess, the robbery and its perps that has shaken the very foundation of mob control in the area. The real focus of the film, though, is McNairy’s Frankie, a nervous sort who goes along with the Squirrel’s risky plan. He and Russell, a wacked Aussie druggie, actually pull off the heist and, at first, it looks like they may pull it off without repercussions. When the mob’s lawyer (Richard Jenkins) calls in Jackie, things really begin to crumble. There are hit men everywhere with Dillon (Sam Shepard) initially called in to find out who did it. Jackie is then hired but the hired gun prefers to kill his victims softly – at a distance. Since the job requires close in work, Jackie brings in an old friend Mickey (James Gandolfini), but he is having his own problems – a broken heart, alcoholism and a penchant for prostitutes. Jackie cannot count on this loose cannon and must do the job himself. There is copious violence in “Killing Them Softly” with mob hits, vicious beatings and generally bad behavior by all the players. However, the essence of the film, which takes place during the 2008 presidential campaign and the economic meltdown that would plague us for years to come, is an allegory to the money and leadership crisis of the time, seen through the eyes and economy of the mob. Andrew Dominik tends to beat us over the head with his comparison of the characters and their plight to the much bigger picture of a faltering national economy. For a film about gangsters, there is an awful lot of talking, mainly between Pitt and Jenkins, that are used to push forward the story. As such, the many underdeveloped characters are more caricature with dumb people doing obvious dumb things – like robbing the mob. There is dark humor galore – a scene where one particularly dumb mobster torches a car gets my laugh every time I see it – mixed in with the violence and Dominik is not quite up to juggling it all into a solid film. “Killing Them Softly” tries to do too much. The director’s original intent was a two and a half hour film, so lots must have been lost in translation to its 97-minutes.