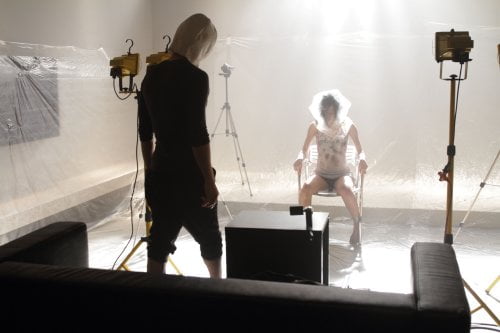 In Tokyo, a serial killer preys on young women, beating and murdering them to the all seeing eyes of his video cameras. He posts his heinous crimes on the Internet and comes to the attention of a rogue reporter in Jakarta who is inspired to copy the crimes but for him it is an act of revenge, not pleasure, in “Killers.”

The Mo Brothers (Kimo Stamboel and Timo Tjahjanto, "Macabre") taking on dueling serial killers, one a twisted sicko who preys on women in Tokyo ("The Raid 2's" Kazuki Kitamura as Nimura), the other Jakarta journalist Bayu who finds his snuff films online and, inspired, begins a string of vigilante killings (Oka Antara, also of "The Raid 2") is certainly stylish, but its central conceit never fully meshes. Although the murders are brutal, the harsher aspects are implied rather than shown, although even children are fair game here. Technology, an endangered flower shop girl ("Like Someone in Love's" Rin Takanashi) and an abusive child pornographer ("The Raid's" Ray Sahetapy) all come in to play, but the film goes on too longer than it can sustain itself. Still Stamboel and Tjahjanto have a flair for visuals and a great ear for music. Grade:

First thing, this is not a film for the squeamish. The graphic depiction of torture and brutal murder is meant for the hard core fan, not the faint at heart. For the fans of Asian Extreme cinema, though, you get a gripping cat and mouse murder game as the Tokyo killer, Nomura (Kazuki Kitamura), treats Bayu (Oka Antara), as his student, grooming the volatile journalist to be his long distance hand for more murder. Bayu, though, has his plans for revenge against Jakarta gangster, Dharma (Ray Sahetapy), who did the young man wrong and continues to do so, ordering his thugs to beat and even attempt to kill him. Namura’s on line videos draw Bayu’s murderous side out (we see the beginning of his growing psychosis as he imagines slaughtering his annoying family). That Namura and Bayu will meet is a given early in the film. The jumps from Tokyo and Jakarta are seamlessly handled by directing team, Kimo Stamboel and Timo Tjahjanto, as the paths of the killers eventually cross. How they cross, though, is what makes “Killers” an exciting, if gruesome, thriller. It is definitely not for everyone but those it does aim at hits a bull’s-eye.