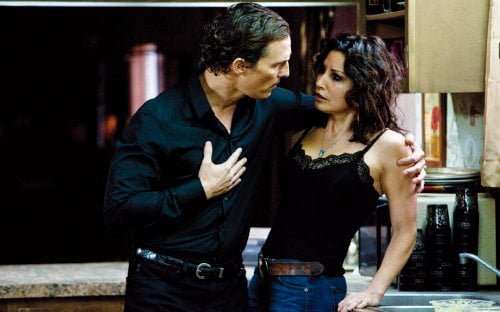 Chris (Emile Hirsch) screwed up badly. He saw a chance to make a quick buck dealing in cocaine but his girlfriend stole his stash. He is in to mobster Digger Soames (Marc Macauly) for $6000 and Digger wants his money. In desperation, Chris devises a reckless plan to get the dough: have his wayward mother killed and collect her insurance money. First, though, he needs someone to do the dastardly dead and seeks out the services of “Killer Joe.”

Chris Smith (Emile Hirsch, "Into the Wild," "Savages") has a dangerous debt and a threatening warning from Digger Soames's (Marc Macaulay, "Monster," TV's 'Burn Notice') biker boys. Trailer park dad Ansel (Thomas Haden Church, " We Bought a Zoo") and slutty stepmom Sharla (Gina Gershon, "Showgirls") can't help, but his pill-popping, alcoholic mom has a 50K insurance policy set aside for his little sister Dottie (Juno Temple, "Kaboom," "The Dark Knight Rises") and he's heard about a corrupt cop who can take care of such things, a man called "Killer Joe." The second collaboration between director William Friedkin ("The Exorcist") and playwright Tracy Letts after 2006's "Bug" is a much starrier, slicker affair featuring a career best performance from Matthew McConaughey as a cooly creepy sadist with a gentleman's veneer, yet this dark comedy seems all rather pointless, a hundred minute build up to a single punch line. The Coen brothers did this better years ago with their debut "Blood Simple." This NC-17 release will have notoriety to spare due to a queasy-making climax that must have Colonel Sanders rolling over in his grave. We can immediately determine that Chris is lacking in role models as his mom stole his last two grams of coke and his stepmom opens the door to him pantless and proud of it. In fact, he's incensed at the latter behavior as his virginal sister could be exposed to it. But when Chris and his dad meet with Killer Joe Cooper to discuss their deal and learn that $25K is expected up front when they had planned on using the insurance money, neither of them reject the idea of using Dottie as collateral (nor of splitting the remainder of her inheritance four ways, with 25% going to Sharla who happens to be cheating on Ansel). In fact, Chris wants someone to 'prepare' Dottie for what her date will entail and dear old dad takes her to buy a dress she feels uncomfortable in. Dottie's left alone in the Smith trailer for a tuna noodle casserole courtship of the corrupt cop, who assures the young girl she doesn't even have to come out of her room if she doesn't want to. She does, appearing in cutoffs, and immediately asks him about killing her mom, a concept she has surprisingly little qualms about. Joe coaxes her into her little black dress. Once that obstacle's overcome, the floodgates open. Friedkin smartly sets the tone with T-Bone, the Smiths chained up pit bull whose pitiful existence weighs heavily throughout the whole film. "Killer Joe" is a movie without a single redeemable character, most behaving stupidly and getting twisty comeuppances. The smart character is a psychopath and the unknown quantity is possibly a budding one. The film's last line of dialogue (the film abruptly cuts to black to punch it) takes that idea to new heights. "Blood Simple" at least had a character at its core that we could care about amidst all the dirty dealing and murderous double crossing and its black-edged humor had wit. "Killer Joe," on the other hand, takes our hand and invites us to roll in the muck with it, its humor derived from its outrageousness. The violence is extreme, and yet even here, it's fumbled, Friedkin holding back on effects which should have been far more grievous given the cause. He also holds back in casting, Dottie cited as twelve years old sporting the body of twenty-two year old Juno Temple (also in a career best performance). The situation would have been just about as shocking and far more believable had the character been sixteen.

Director William Friedkin has been making movies for 45 years and, in that time, has created some of the greatest films, “The French Connection” and “The Exorcist,” and some of the worst (“Cruising (1980)”) and a whole bunch in between. “Killer Joe” starts off well enough with Chris’s dilemma coming to a head when he sustains a beating by Digger’s thugs – a warning that things will get worse, much worse, if he does not produce the owed money. Chris discusses the problem with his working-class slob parents, Ansel (Thomas Hayden Church) and Sharla (Gina Gershon), and, with the prospect of splitting tens of thousands of dollars, the killing is set in motion.. Matthew McConaughey is on a roll this year with his well-defined and acted co-starring role in “Magic Mike” and, with “Killer Joe,” he shows his capability as a charismatic actor. Joe is the epitome of cool. A police detective by day, Joe supplements his income on the right side of the law with an even bigger paycheck on the wrong side as a hit man for hire. Chris sets a meet with the killer but does not have the money to pay for Joe’s services. He asks Joe to do the job on spec and the cop/criminal almost walks out – until he meets Dottie (Juno Temple), Chris’s young and comely sister. Joe agrees to the terms but only on one condition: he wants Dottie as a “retainer.” Things start to get pretty sordid from here on in. This is a case of good actors given earthy characters but, as with Thomas Hayden Church and Gina Gershon as Chris’s sleazy, alcoholic ne’er-do-well mom and dad, they are really caricatures and not much more. Chris and his family, excluding Dottie (who is sweet and innocent), have little dimension or redemption. Such talented actors really deserve a better film. Tracy Letts, adapting his stage play, keeps the claustrophobic feel of the stage. This is apparent in a scene that simulates fellatio and in keeping with the unsavory nature of “Killer Joe.” This might explain why it took over a year to get distribution. Not Friedkin’s best effort.