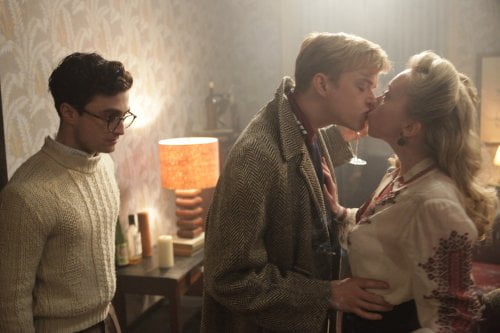 “In writing, you must kill all your darlings.” William Faulkner

In his late teens, Allen Ginsberg (Daniel Radcliffe, the Harry Potter series) thought his acceptance into Columbia University would open the door from his stifling life at home in Patterson, New Jersey with his working class poet dad Louis (David Cross, TV's 'Arrested Development') and his beloved, mentally ill mother Naomi (Jennifer Jason Leigh, "The Spectacular Now"). During a freshman tour of the campus, his guide is horrified but Allen is enthralled by the spectacle of Lucien Carr (Dane DeHaan, "Chronicle," "Lawless") standing on a table quoting a prurient Henry Miller passage. Carr's interest is likewise ignited when Ginsberg challenges Professor Steeves' (John Cullum, "All Good Things," TV's 'The Middle') adherence to rhyme and meter in poetry, but their mutual attraction will not prove the first time Carr backs away from his own seduction in "Kill Your Darlings." Cowriter (with Austin Bunn)/director John Krokidas announces his feature debut is going to be something a bit different from the get-go, an English language version of the German WWII song 'Lily Marlene' leading into a provocative late scene of Lucien Carr, jailed for murder, screaming 'You sent him to me!' to the departing Allen Ginsberg. The title slams onto the screen one word at a time with the sound of a closing prison door. The film does settle into a more traditional narrative, but those well married yet seemingly disparate opening components set the stage for ongoing cinematic jazz riffs. Unlike Walter Salles' 2012 thinly veiled account of the Beat writers "On the Road," Krokidas zeroes in on the genesis of their movement in 1944, before any were published, with the least known Lucien Carr the match that sparked the others' flame. The story is told from Ginsberg's point of view and he thrills when Carr takes him to a party in the Sheridan Square area, well known as a gathering place for gays. Carr makes his entrance by sweeping a woman into his arms and kissing her deeply, telling Ginsberg 'She tasted like imported sophistication and domestic cigarettes.' The ambiguity of his sexual identity is further muddled when Ginsberg meets his host, the intellectual David Kammerer (Michael C. Hall, Showtime's 'Dexter'), now working as a janitor in order to be near Carr. It soon becomes clear Carr is playing off his long time admirer against his new one. Added to the mix is Kammerer associate William Burroughs (Ben Foster, "The Messenger"), found in the bathtub wearing a gas mask. After verbally sparring with Kammerer, Carr becomes hell bent on forming a new literary movement by breaking all the rules, but it's Ginsberg who comes up with its name, 'The New Vision,' inspired by Walt Whitman, and it is Ginsberg whom Carr challenges to write its first work. When Carr's pickup cycle begins to spiral after meeting Jack Kerouac (Jack Huston, "Not Fade Away," HBO's 'Boardwalk Empire'), Kerouac admires Ginsberg's work, but Carr wants to head to France with the man via the Merchant Marines, leaving Ginsberg behind ('We both know why you can't come'). Before the night is over, though, a tragedy will find Carr asking Ginsberg to write again, this time a devastatingly ironic deposition statement which will test his friend's loyalty. f anyone's doubted Radcliffe's ability to move into adult roles and leave Harry Potter behind him, this should convince. Beneath a forelock of curls and large, square framed glasses, Radcliffe is a well of tentative emotion, distraught at leaving his mother behind but excited to experience life - and art - in the big city. The actor easily passes the test of one who's associated with an iconic role as we relate to his character and not the celebrity embodying him - he's well cast here. The showy role, of course, belongs to the terrifically talented DeHaan, who wraps himself in mystery while indulging in the most rebellious and hedonistic behavior - he's a knockout. Hall mixes longing and resentment and Jason Leigh is touching as Ginsberg's disturbed mother. In a small role, Foster, who began his career vigorously chewing scenery, does something unexpected and it works - he underplays one of literature's most outrageous figures as a contemplative, if high-wire, eccentric. As Kerouac, Houston never quite convinces, but he's buoyed by his castmates. Elizabeth Olsen ("Martha Marcy May Marlene") is tart and sharp as Kerouac's first wife Edie. When we meet Carr's mother, Kyra Sedgewick (TV's 'The Closer') makes us recall his witty party quote. Krokidas and director of photography Reed Morano ("Frozen River") give the film the flavor of its time period while also incorporating more modern tricks - scenes replayed in reverse, a jazz club's patrons frozen as Ginsberg and Carr explore. The complementary soundtrack features the Brahms which drew Ginsberg to Carr's dorm door, popular music of the day and the edgy anachronistic use of TV on the Radio's 'Wolf Like Me.' End titles reveal how Carr disassociated himself from the Beats, having the dedication on Ginsberg's 'Howl' removed, going on to marry and have three children.

Allen Ginsberg (Daniel Radcliffe), along with Jack Kerouac (Jack Huston) and William S. Burroughs (Ben Foster), spearheaded the beginning of the Beat generation that would influence young intellectuals through the 1950s and 60s. These iconic figures, though, had to find themselves and their evolution unfolds in “Kill Your Darlings.” John Krokidas makes his feature film debut as director and co-writer (with Austin Bunn) to tell the story of the birth of the Beat generation. It is the 1940s and the war in Europe is still raging. Young Allen Ginsberg is torn between staying at home with his father, Louis (David Cross), and caring for his mentally disturbed mother, Naomi (Jennifer Jason Leigh) or going to Columbia University. When his acceptance letter arrives, Allen get encouragement from his dad to pursue his dreams and get the education he desires. Ginsberg arrives on campus and meets his definitely non-intellectual and bigoted roommate, Luke (Zach Appelman). Soon, though, he crosses paths with Lucien Carr (Dane DeHaan), the scion of a socially prominent family. The self-assured Lucien takes the naïve Ginsberg under his wing and introduces Allen to other young intellectuals, including Burroughs and Kerouac. However, there is more to “Kill Your Darlings” than the birth of the Beat generation. Lucien had moved from one city to another while growing up and was shadowed by an older man, David Kammerer (Michael C. Hall), who is still obsessed with younger man. Carr kept Kammerer at arms length for years and, when Allen Ginsberg arrives at Columbia, Lucien embraces his new found friend and disdains David. The relationship between Carr and Kammerer will reach a deadly crescendo that will have serious repercussions. A splendid ensemble cast is what makes “Kill Your Darlings” a cut above the rest. The 2010 biopic, “Howl,” also focused on Allen Ginsberg’s life but from the perspective of his poem, Howl, and the legal battles it spawned. Krokidas delves into the formative years in college for Ginsberg and the rest when they founded the New Vision movement that would expand to the Beat generation. The cast, led by first among equals, Daniel Radcliffe, do a terrific job in giving life to their budding literary figures. One thinks of Ginsberg, Kerouac and Burroughs in their full blown intellect as they matured in body and spirit. Krokidas tells their story from the time of their formative years. These young men have not matured to their later levels but the seeds of those personalities are planted during the last years of World War II. Radcliffe is quite good in his role as Allen Ginsberg and Dane DeHaan gives his Lucien real dimension and life. Jack Huston, as larger-than-life Kerouac, and Ben Foster, as bland sophisticato Burroughs, give their roles real personality. The production captures the look and feel of the ivory towers intellects of New York during World War II. The natty clothes of the protagonists, with their ever-present cigarettes, is of the day, “Kill Your Darlings” is an exercise of intellect about the intellectuals that shaped our thinking with their ground-breaking works.