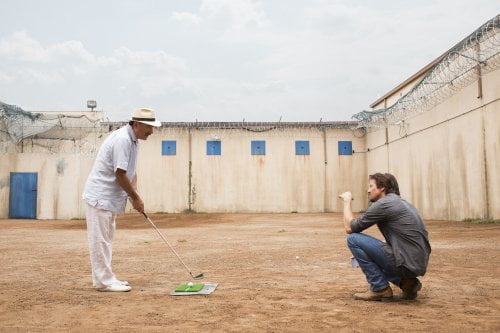 In 1994, Gary Webb (Jeremy Renner) was a reporter on the San Jose Mercury News covering local stories from around the town. When he receives a phone tip about the drug cartels selling tons of cocaine to the US government, he uncovers an operation that goes to the highest levels of the CIA and beyond. Gary breaks the story and, for Webb, it is the Big One, but soon he finds out that his reporting the facts might just “Kill the Messenger.”

Director Michael Cuesta and screenwriter Peter Landesman adapt Gary Webb’s book Dark Alliance and Nick Schou’s Kill the Messenger and chronicles the reporter’s dogged search for the truth. Webb’s Big Story, the one that every reporter dreams of, begins with a call from a woman named Coral Baca. He agrees to a meeting with her and she plants the seed of the possibility that the US government was involved in an undercover operation to purchase cocaine from the drug cartels to fund the Contras in Nicaragua during the 1980s. The more deeply Webb takes his investigation, the more he finds evidence that high-ranking government officials were entwined with drug cartels, drug dealers and trafficking cocaine. His series of articles titled Dark Alliance (later to be a book) went worldwide and Webb was praised by his colleagues for his tenacity in getting the story. Then, events turn against the crusader and his investigations are undermined and reputation ruined. As has become the norm for many of us, I went on the web to get the true story about Gary Webb. What I found is that the essence of his story is captured honestly by the filmmakers. His one-man crusade was thwarted not for telling the facts but for his “misdirected zeal” in his investigation – this from such prestigious publications as the LA Times and the Washington Post, as well as the government. “Kill the Messenger” is the kind of true story that leaves a knot in your stomach as we watch a man’s life go from the highs of fame to the lows of a ruined career. Jeremy Renner does a solid job playing Gary Webb but the all star cast supporting him is a list of Hollywood who’s who. It is actually an embarrassment of riches that sometimes distracts from the story. That said, it is a well done true life thriller about one man against the system.