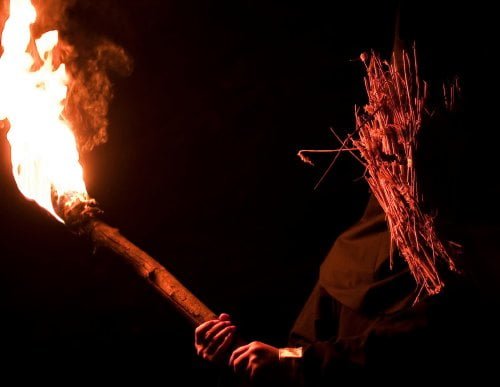 Jay (Neil Maskell, Wheatley's 'The Wrong Door' TV comedy) is constantly being nagged by his wife Shel (MyAnna Buring, TV's 'The Wrong Door') about money since he hasn't worked in 8 months. This British family man and former soldier has turned his training into a profession and, despite his self-medicating from his last, traumatic 'Kiev' job, he agrees to go back. When he and his partner Gal (Michael Smiley, "Down Terrace") meet their odd new client (Struan Rodger), though, their contract is signed in blood before they are given their "Kill List"

Cowriter (with Amy Jump)/director Ben Wheatley's first feature, "Down Terrace," was a nasty little blackly comic family crime thriller. His more ambitious followup keeps the crime genre veneer, but no mistake about it this is a very unsettling horror film. Wheatley's taken ideas from such films as "The Wicker Man" and "Rosemary's Baby" and wrapped them into his own aesthetic. Jay's wife is a beautiful blond, a former member of the Swedish military, but their relationship is volatile. She occasionally shows sympathy for his rattled nerves, but she's used to the good life, a bit selfish, and the recession is making her fearful. We see the family unit (they have a young son, Sam) rolling about in the yard, playing at medieval jousting and the foreshadowing is obvious, if not of what. The couples' fights upset their young son, but when he arrives for a dinner party, Gal calms the lad, explaining that best friends argue things out. Gal's come with a new lady friend, Fiona (Emma Fryer), and the tension between Jay and Shel is embarrassing, Shel making constant little digs. Jay, who clearly has rage issues, dumps his plate upside down on the table, then pulls the whole tablecloth to the floor. As the couple screams in the kitchen, Gal goes to put Sam to bed, leaving Fiona alone to contemplate the disastrous evening. But she does something unexpected and here is where we know that Wheatley is headed somewhere far more disturbing than a hit man genre film. Jay and Gal have an interesting dynamic. Gal seems like an easy going bloke, a bit wary about going back into the field with his highly strung buddy. On the road in anonymous hotels, these two come to blows themselves, but it's just a bit of steam blowing off. But where Gal approaches jobs methodically, Jay is showing an increasing hair trigger temper and level of sadism. They're taken aback when they discover their first hit is a priest, but then set about to do the job. Jay's the one to pull the trigger. His victim thanks him before he does. Odd but they can rationalize. Their second mark, a Librarian, goes down in ways far more disturbing (Wheatley employs fx which would make French provocateur Gaspar Noé envious). While staking out their third, an MP, they witness a demonic procession in the woods and lose control of their mission. Wheatley and Jump's script has a beautiful build and is liberally sprinkled with clues as to what is happening. When asked what she does at dinner, Fiona says she is a Human Resources Manager. Shel says she cannot understand the fighting in Ireland when they are 'from the same religion.' Later in a hotel dining room, Jay snaps when a table of diners break out into 'Onward Christian Soldiers.' There are the remains of a rabbit found in Jay's yard attributed to their (black) cat, and you can probably guess what eventually happens to the feline. According to a regretful Gal, Fiona gives him the bum's rush, yet Jay continues to see her in places where he'd rather not. A strange symbol, like something from "The Blair Witch Project" crossed with a target, appears and reappears. Production design represents rural England at its bleakest and cinematographer Laurie Rose ("Down Terrace") does a great job tailing his subjects, sometimes in darkness (a sequence held in a dark, dripping tunnel is particularly provocative). Early scenes have a reddish hue and several takes are long and sustained. The score is effective, a woman's voice deep in the mix. Martin Pavey's sound design is so unnerving it scared the bejeezus out of our cats and Robin Hill edits at just the right beat - the final cut is perfection, an abrupt end on an unspeakable horror. The screen goes to black, as it does throughout the film, and the audience puts together the pieces as the now unseen Jay must.