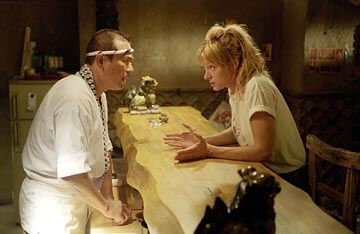 Quentin Tarantino faltered his last time out of the gate with the sub par, for him, "Jackie Brown." But, the man who gave us "Reservoir Dogs" and "Pulp Fiction" is back in fun form with his tale of mayhem, vengeance and a whole lot of sword fighting in "Kill Bill, Volume One."

In 1983 with their construction business going under, five childhood friends and partners who had been denied a loan decided that crime was the only way out of their financial problems. Deciding they needed to project a terrifying presence like the Baader-Meinhof terrorist group to point police in the opposite direction, they robbed a bank to fund their ultimate endeavor and scored the largest ransom in history for "Kidnapping Mr. Heineken." A fascinating true story adapted from Peter R. de Vries's book by William Brookfield is turned into a poorly paced muddle that only occasionally comes to life by director Daniel Alfredson ("The Girl Who Kicked the Hornets' Nest"). Featuring his feistiest performance in some time, Anthony Hopkins is terrific as beer tycoon Freddy Heineken, which, unfortunately, only emphasizes the scattershot casting of his younger costars. The film starts off well enough, even as we struggle to determine just who is who and how they are related, but once the crime has been committed, the only real pleasure to be found is in Hopkins engaging in psychological warfare. The Amsterdam set film begins as the five - Cor Van Hout (Jim Sturgess, "One Day," "Cloud Atlas"), Willem Holleeder (Sam Worthington, "Avatar," "Cake"), Jan 'Cat' Boellard (Ryan Kwanten, HBO's 'True Blood'), Frans 'Spikes' Meijer (Mark Van Eeuwen) and Martin 'Brakes' Erkamps (Thomas Cocquerel) are denied a loan because the building they offer as collateral is overrun by squatters. In a dynamic scene, the quintet take matters into their own violent hands, but the punks in their building prove difficult to dislodge. Plan B kicks off with a wild and wacky robbery, with Cor reminding all to 'shoot at the ground.' Back home, Cor's pregnant wife Sonja (Jemima West, "The Mortal Instruments: City of Bones") tells him 'Someone robbed a bank like Al Capone. With machine guns.' She marvels that no one was shot. After establishing a 'safe house' to lodge their victim, the quintet snatch Heineken and his chauffeur Ab Doderer (David Dencik, "The Homesman"). A taxi driver witnesses the whole thing and actually follows them, but they get away, only to discover mistakes have been made which need to be covered. Then there's Freddy, who, not only isn't terrified, but begins making demands of his captors. While there is still some drama in the film's latter section, especially regarding the rationale for having taken Heineken's chauffeur, the eventual capture of the successful ransomers seems largely random, 'explained' with a closing credit title card. It all smacks a bit too much of Hollywoodization, the criminals well intentioned folk heroes with bad luck (name checking the Anne Frank house feels like a sop to American audiences). Then there's the pacing issue, the movie feeling an hour longer than its actual 94 minute running time. Cinematographer Fredrik Bäckar initially employs a muddy green/brown pallet, like a Heineken bottle in the back of a dark closet, gradually shifting to more pleasing blue grays as the noose tightens around the antiheroes. Grade:

Uma Thurman is the lady with no name, the sole survivor of the brutal slaughter of a wedding party by the Deadly Viper Assassination Squad led by Bill (David Carradine). But, they made one mistake. They did not make 100% sure that the bride was dead. Four years later, she comes out of her coma and the only thing she wants is revenge over the life, and unborn baby, that she lost at Bill's command. Tarantino's real "Kill Bill" is about four hours long and he, smartly, broke it in two. "Volume One" has the nameless warrior woman set off to dispatch those who took her life away. In doing so, the director/writer uses a variety of techniques with samurai sword fights galore, wire work that makes "Crouching Tiger, Hidden Dragon" look cheesy, and an anime sequence used to introduce O-Ren Ishii (Lucy Lu), one of the Deadly Vipers responsible for the slaughter and now the head of the criminal yakuza in all of Japan. The animated method is cleverly done and, in a short space of time, develops the character very well. This is a good thing as Lucy Lu is the worst thing about "Kill Bill." Sure, she is very pretty, but she offers nothing to her character except her blank good looks. Uma Thurman, on the other hand, does an exemplary job as the lady with no name. The short, tough lines she mouths suit the character perfectly and she handles her sword with grace. In typical spaghetti western fashion, she must take on ever increasing numbers of blade-wielding bad guys until the grand finale's battle royal. I won't spoil it for Tarantino's fans but Busby Berkeley would be proud of its choreography and imagination, as would Roger Corman for the splatter fest. Production design (Yohei Tanada and David Wasco) and art direction (Daniel Bradford) work hand in hand to create the comic book look and feel that the helmer is obviously striving for. Costume, too, by Kumiko Ogawa and Catherine Marie Thomas, catches the kitsch and is over the top. Robert Richardson's lensing is in keeping with the fast paced action and highly choreographed sword battles. Quentin Tarantino isn't going for serious drama here, despite the woman's story of loss and pain. He keeps things on a cartoon level, especially with the extended anime sidebar. The action, too, is on the incredible side but it is fun to watch. There are oodles of asides to other movies (including the helmer's own) and the film is a heartfelt homage to B-movies, samurai and chop-sockie flicks and cult films in general. While it is a clever move to break "Kill Bill" up into two parts, I found "Volume One" to be less than satisfying. I felt a tiny bit cheated by not having Tarantino's smorgasbord of mayhem a complete work. This installment just whetted my appetite for the whole enchilada. I am sure that I will want to see the whole thing a second time just to catch all of the film in jokes and references.