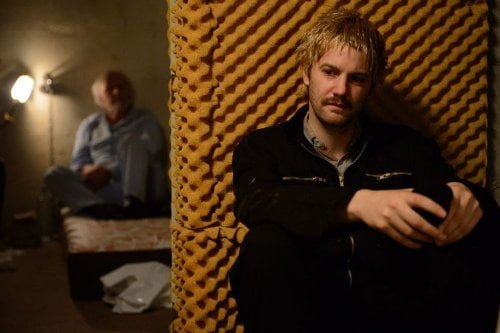 Alfred “Freddy” Heineken headed the famous brewery and was one of the wealthiest men in Europe. In 1983, group of ambitious young men see the tycoon as their lunch ticket and plan, for two years, “Kidnapping Mr. Heineken. “

In 1983 with their construction business going under, five childhood friends and partners who had been denied a loan decided that crime was the only way out of their financial problems. Deciding they needed to project a terrifying presence like the Baader-Meinhof terrorist group to point police in the opposite direction, they robbed a bank to fund their ultimate endeavor and scored the largest ransom in history for "Kidnapping Mr. Heineken." A fascinating true story adapted from Peter R. de Vries's book by William Brookfield is turned into a poorly paced muddle that only occasionally comes to life by director Daniel Alfredson ("The Girl Who Kicked the Hornets' Nest"). Featuring his feistiest performance in some time, Anthony Hopkins is terrific as beer tycoon Freddy Heineken, which, unfortunately, only emphasizes the scattershot casting of his younger costars. The film starts off well enough, even as we struggle to determine just who is who and how they are related, but once the crime has been committed, the only real pleasure to be found is in Hopkins engaging in psychological warfare. The Amsterdam set film begins as the five - Cor Van Hout (Jim Sturgess, "One Day," "Cloud Atlas"), Willem Holleeder (Sam Worthington, "Avatar," "Cake"), Jan 'Cat' Boellard (Ryan Kwanten, HBO's 'True Blood'), Frans 'Spikes' Meijer (Mark Van Eeuwen) and Martin 'Brakes' Erkamps (Thomas Cocquerel) are denied a loan because the building they offer as collateral is overrun by squatters. In a dynamic scene, the quintet take matters into their own violent hands, but the punks in their building prove difficult to dislodge. Plan B kicks off with a wild and wacky robbery, with Cor reminding all to 'shoot at the ground.' Back home, Cor's pregnant wife Sonja (Jemima West, "The Mortal Instruments: City of Bones") tells him 'Someone robbed a bank like Al Capone. With machine guns.' She marvels that no one was shot. After establishing a 'safe house' to lodge their victim, the quintet snatch Heineken and his chauffeur Ab Doderer (David Dencik, "The Homesman"). A taxi driver witnesses the whole thing and actually follows them, but they get away, only to discover mistakes have been made which need to be covered. Then there's Freddy, who, not only isn't terrified, but begins making demands of his captors. While there is still some drama in the film's latter section, especially regarding the rationale for having taken Heineken's chauffeur, the eventual capture of the successful ransomers seems largely random, 'explained' with a closing credit title card. It all smacks a bit too much of Hollywoodization, the criminals well intentioned folk heroes with bad luck (name checking the Anne Frank house feels like a sop to American audiences). Then there's the pacing issue, the movie feeling an hour longer than its actual 94 minute running time. Cinematographer Fredrik Bäckar initially employs a muddy green/brown pallet, like a Heineken bottle in the back of a dark closet, gradually shifting to more pleasing blue grays as the noose tightens around the antiheroes. Grade:

I barely recall the events in November of 1983 when Freddy’s kidnapping resulted in the highest ransom paid to date. Director Daniel Alfredson, with a script by William Brookfield, adapts Dutch investigative journalist Peter R. de Vries’s novel of the case, The Kidnapping of Alfred Heineken (1987). The film stars Jim Sturgess, Sam Worthington and Ryan Kwanten as three of the kidnappers, with Anthony Hopkins giving a sold performance as Freddy Heineken. The film follows the usual crime thriller pattern as the would-be entrepreneurs fail in business and one of their numbers, Cor Van Hout (Sturgess), comes up with a plan to get rich. They decide the most lucrative crime would be kidnapping and they target filthy rich Freddy Heineken as their victim. They realize, early on, that the plan would cost money and time and have to figure out how to get it. How else but steal it. The criminal procedural that makes up the bulk of the first half of the film details the rigorous planning for the kidnapping, including building a sound proof prison in another’s business. But, much of this first half seems to lean to the comic, “The Gang that Couldn’t Shoot Straight” vibe. Then, it turns to the kidnapping. Unfortunately, the success, or near success, of the film rests on Anthony Hopkins solid performances as Freddy Heineken. The actor uses his usual ticks and mannerisms but gives the only fully dimensioned performance in the film. The rest of the cast does not fare as well. In the end,