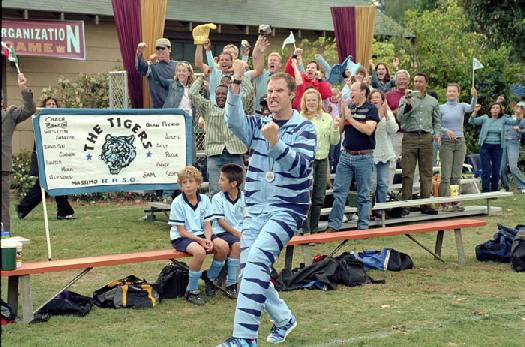 When Phil Weston (Will Ferrell) learns that his soccer coach father, Buck (Robert Duvall), has not only made his son Sam (Dylan McLaughlin) a permanent benchwarmer, he even traded him to the worst team in the league, he becomes infuriated. To get back at his always-competitive dad, Phil volunteers to coach Sam’s new team, the Tigers, and will bring them to the finals even if they do it “Kicking & Screaming.”

Seeing director Jesse Dylan’s attempt, and there have been so very many, to remake the classic “The Bad News Bears” has made me long to see, again, that Walter Matthew rags to riches comedy about a bunch of foul mouthed Little League losers and their boozing, Tiparillo-smoking coach. The 1976 film pulled no punches and was amazingly politically incorrect when society was beginning to go the PC route. Dylan, whose previous attempt at comedy was the sometimes-amusing sequel, “American Wedding,” takes the talented Will Ferrell and the cliché-driven script by Leo Benvenuti and Steve Rudnick and gives us the umpteenth remake of “The Bad News Bears.” Phil Weston is a nice and kind man who doesn’t want to make waves, especially if it involves his domineering father. But, when Sam’s team, the Gladiators, wins yet again, it is without the boy who has been benched for the season by his own grandfather, Buck. It’s enough, the coach believes, that the boy be happy to be a part of a winning team – a team led by Buck’s own, late-in-life son, Bucky (Josh Hutcherson). Insult is added to injury when Sam is traded to the Tigers. Of course, when Phil arrives for his first coaching session he is confronted with a group of misfit (mostly nondescript) players who could not win a game if they played against themselves. The Tiger’s first outing on the field is against the Gladiators who soundly trounce their ill-prepared opponents. That’s when Phil plays his trump card and convinces Buck’s neighbor, football legend Mike Ditka, to be his assistant coach. Ditka, always looking for a way to get under Buck’s skin, agrees and brings with him a pair of Italian soccer progenies, Masimmo (Alessandro Ruggiero) and Gian Piero (Francesco Liotti). Suddenly, the Tigers are winning games. Normally mild-mannered Phil falls into the trap of competitive kid sports and loses track that the boys are there to have fun whether they win or lose. It’s just win, win, win to Phil and he doesn’t care for anything but victory. You can pretty much guess what happens when the Tigers make it to the playoffs and the expected politically correct messages are marched out. Will Ferrell broke out of his former comedy character actor roles with the phenomenally successful “Elf.” Expectations ran high, and were disappointed, with the lackluster and silly “Anchor Man.” (I won’t bother to mention his Woody Allen impersonation in “Melinda and Melinda.”) In the PG-rated “Kicking & Screaming,” Ferrell is relegated to move between milquetoast and soccer fanatic but without the edge a more interesting PG-13 would have afforded the comic actor. It doesn’t help that Ferrell must carry the film by himself, ham-strung as he is by the simple-minded screenplay that does nothing to capitalize on supporting actors and personalities like Duvall and Ditka. The Tigers, as expected, are made up of a multi-sized, multi-raced, multi-ethnic group of kids who sorely lack the skills needed to play the game of soccer. The only one given any shrift or personality is Elliot Cho as the cutely diminutive, lesbian-parented Byong Sun – whose name is butchered by Ditka one too many times. The rest of the kids are there to fill space and not much more. The same goes for the equally nondescript soccer parents. Only Kate Walsh, as Phil’s wife Barbara, is able to put any dimension into her character. Techs are straightforward and without exception. I should have watched my copy of “The Bad News Bears.” If anyone tries to get you to go to “Kicking & Screaming,” do just that.