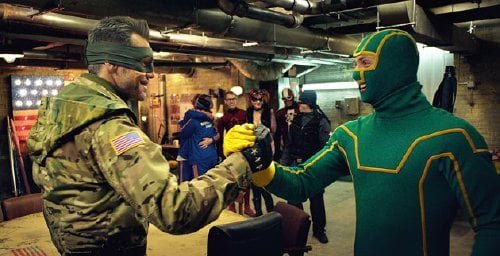 After Kick-Ass's (Aaron Taylor-Johnson) self made super hero made media waves, a whole new group of crime fighters come out of the woodwork, led by Colonel Stars and Stripes (Jim Carrey). But when Red Mist rises bigger and badder and rechristened 'The Motherf%&*^r,' Hit Girl (Chloë Grace Moretz) has to moonlight from high school to save the Justice Forever forces in "Kick-Ass 2."

Writer/director Jeff Wadlow ("Never Back Down") takes over the reins of a franchise which had nowhere to go and it shows in this tonally inept and irresponsible movie which thinks a fifteen year-old shooting real bullets at an unprepared friend to test a vest is funny, which celebrates a sickening level of violence and death over a high schooler's need for vengeance and which sexualizes its underage star while purporting to condemn that very trend. After ridding his city of gangster Frank D'Amico with more than a little help from Hit Girl and her dad, Dave Lizewski (Aaron Taylor-Johnson) wants to step up his game and offers to be Hit Girl's 'Robin.' 'I'm with the NFL - you play Pee Wee,' she responds, before beginning a series of training exercises where Kick-Ass gets his ass kicked. But her guardian, dad's former partner Marcus (Morris Chestnut), gets wind that she's been skipping school and makes her promise to hang up her super hero gig for good. Kick Ass finds solidarity when he meets Dr. Gravity (Donald Faison, TV's 'Scrubs') who leads him to Justice Forever. But Chris D'Amico, who's accidentally fried his mom in her tanning bed, is inspired by some S&M slanted lingerie he finds in her room and tasks Javier (John Leguizamo) with hiring some real psychopaths to hunt down Kick-Ass. Like the first film, the story follows three threads (the third is a mini-"Mean Girls" as Mindy/Hit-Girl falls in with three popular bitches), but it feels disjointed. A romance of sorts between Kick-Ass and Night Bitch (Lindy Booth) blossoms when Justice Forever takes out an Asian prostitution gang, a friendship is divided when Marty (Clark Duke) joins the league but Todd's (Augustus Prew) efforts are laughed at and there's a falling out between Dave and his dad (Garrett M. Brown). There's so much going on, a major character is introduced and dispatched before making sense of his back story. The Motherf%&*^r's group only gets one well-defined sidekick, Mother Russia (Olga Kurkulina), while the rest are interchangeable. But the film's biggest problem is that it uses some really brutal violence for kicks without having any tonal realization of dark humor. When Spider-Man's grandfather or Batman's parents are killed, it's a shock and motivation, providing a lesson grounded in morals. Here D'Amico sends his thugs to torture and Kill Kick-Ass's dad and it's senseless. Wadlow's apparent glee for creating mayhem reaches fever pitch when Mother Russia kills 1/2 dozen cops, the last two by launching a running lawnmower through their windshield - and one can deduce from the abrupt cut that the censors came into play but what we've seen is bad enough and certainly not funny which is what appears to be the filmmakers' intent. It's also disturbing to see just how much Moretz's glossed lips are fetishized here, even as her 'mentor' Brook's (Claudia Lee, TV's 'Hart of Dixie') stripperesque cheerleading tryout is outclassed by Mindy's sheer athleticism. About the only thing Wadlow balances out with humor is the girl's propensity for language that would make a sailor blush, with Marcus maintaining overflowing swear jars. Kick-Ass himself has never been all that interesting and he gets one good joke here (an 'I hate reboots' tee). Concluding with Mindy noticing his newly honed physique and giving him a kiss before heading off into the sunset on her purple motorbike screams threquel - please stop. Where the first film was a somewhat subversive super hero satire set amidst a world of real adult crime, the second has the poor taste to revel in murder and mayhem motivated by teenaged hissy fits. It's morally repugnant.